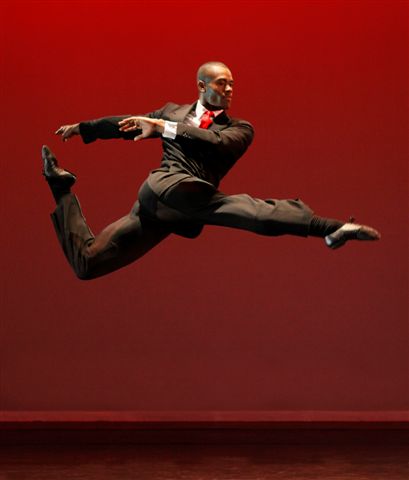 Jamar Roberts in “Among Us”. Photo: Paul Kolnik.

Dancing on the Outside, Downstage

After fifty years of watching the Ailey Company, it is sad to report
the good news mixed with remorse.  The beautiful dancers may be
“acrobats of God” as Martha Graham said of her dancers, but they are
more acrobats than messengers of the spiritual. What makes that so
sad, is that they dance to spirituals; their “Revelations,”
choreographed by Ailey in 1960 ( I saw it first in 1963) is the most
famous dance  interpretation of that music.

Danced on Program B (there were three programs during the residency)
by Briana Reed and Jamar Roberts, the song “Fix Me, Jesus,” a
spiritual that is surely a prayer, drew applause as Ms. Reed performed
a deep ‘penche-arabesque’…torso low, leg extended behind. It was a
fine technical feat, as is much of the dancing, but there was an
absence of feeling tone that emptied the gesture. Similarly, another
great piece,  “I Wanna Be Ready,” once the most moving of the dances
in “Revelations,” became a ‘show-off’ exhibition for Amos J. Machanic,
Jr.

I appreciate that keeping a company alive to its creator’s intentions
is difficult, almost impossible. We now are applauding Merce
Cunningham for deciding that his company should not dance his works
after two years time.  But all Ailey dancers are well trained;
how have they lost the spirit of the work that has for so long, moved
audiences around the world? too much ballet training? not enough
dramatic coaching?

There was one section of Judy Jamison’s “Among Us” that did project
the drama inherent in the work. That was the trio entitled
“Afterwards” danced by Antonio Douthit, Samuel Lee Roberts and
Guillermo Asca. These ‘guys’ captured the street scene of ‘hanging
out,’ by eliminating the high kicking acrobatics and giving us a real
feel for the scene.  In “Among Us,” a work, by Ms. Jamison is set in
response to her art on the walls of the set, she develops a series of
romantic responses that, although charming and well danced, seem not
to respond to the art at all. Again, the lifts, balances, rolls and
other technical feats were well done…too well done to draw us in
emotionally to each unique episode.

“Suite Otis,” choreographed by the Broadway dancer George Faison (who
also designed the costumes) made us see red.  The costumes were pink
and red, the lighting was all red. The movements were repetitive high
kick swings and throw around lifts. The music of Otis Redding (played
too loud over the system) deserves more love, more from the inside out
and less screaming ‘in our face” dancing.  Ailey’s company has become
pop art. Let’s pray that it finds its way back to fine art and the
spiritual.