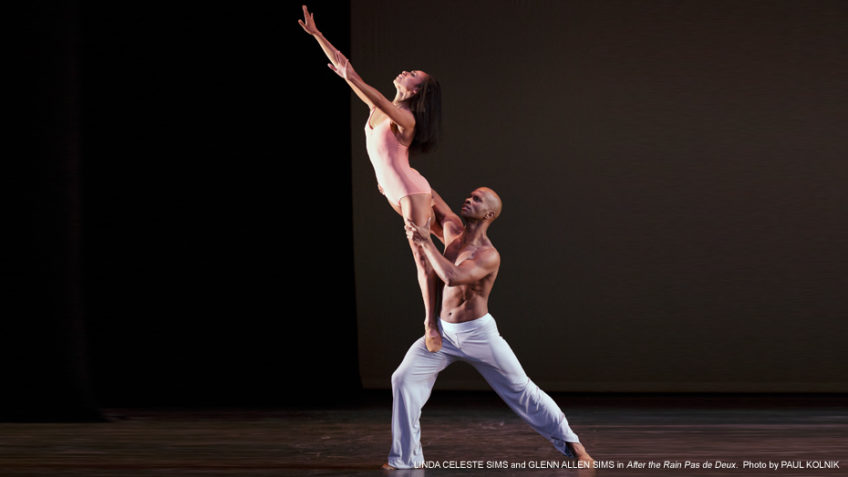 Program C, performed during Alvin Ailey American Dance Theater’s annual residency at Cal Berkeley, featured three dances first performed by the company in 2014. This program marked the increasing inclusion of guest choreographers, a few West Coast Premieres, and wrapped up predictably—sweetly–with their signature dance, “Revelations.” The most brilliant of this program was the opening, “Uprising” by Israeli-born choreographer Hofesh Shechter who co-composed the thundering percussive score with Vex’d. This dramatic dance started with Lee Curan’s intense striped-down-lighting, creating more shadow than light, allowing the seven male dancers to lurk in the smoke filled shadows or be drenched in pools of light as if projected from a police helicopter. Their clothes were casual, their gestures aggressive street slang–without being cliché, and the range of their testosterone movement flowed in and out from modern to primitive. Much of the choreography had them scurrying across the floor like jungle beasts on a rampage, heads dropped using all fours to propel them across the stage. These herd-like sweeps of movement were followed by moments of very little action and, much to Shechter credit, the times of abiding felt as if the men were waiting to get the next visceral missive. They sometimes stood or danced with their backs to the audience, sometimes oppressing each other sometimes offering each other a hand in support. Surprisingly, this dark dream-like loosely narrative world that “Uprising” so tensely created ends with a very literal tableau, like that made from raising the American flag at Hiroshima, as one man waves a red flag on the others backs and shoulders.

“Suspended Women,” by Jacqulyn Buglisi, was the complete opposite of “Uprising” on a number of levels including being very girly and cluttered with the crinoline and bodices of 16 femme fatales–who swooned and looked sorrowful for no apparent reason. (Girdle too tight? Is Maurice Ravel’s piano music getting you down? Not enough guys to go around?) Yes, there were beautiful moments of wave-like momentum just by the sheer volume of them moving across the stage but there was also something superficial to this costume ball gone wrong that wasn’t helped by Clifton Taylor’s one-dimensional lighting. And when the four men did show up in suits at the end of the piece strutting across the stage shirtless all they could offer was their manly physique and to put their coats on a few shoulders before walking off. “Suspended Women” left me suspended but for the wrong reasons.

Perfect timing in the program to have Christopher Wheeldon’s simple and short, “After The Rain Pas de Deux” with real life husband and wife, Linda Celeste Sims and Glenn Allen Sims. What better a choreographer for a married couple than Wheeldon who is known for his minimalistic and anti-sentimentalistic approach to dance? ATRPDD is stripped of emotion and even sensuality allowing this gorgeous couple to move like fluid sculpture and grants Mr. Sims to be more than Mrs. Sims’ vehicle for lifts—which there are several but an equal to her undulating lines. The two are perfectly cast and perfectly accomplished in this musical lullaby by Arvo Part.

Each performance of this residency ends with Ailey’s masterpiece “Revelations” so there isn’t much to be said about it since its second nature for the company and I can’t imagine anyone who hasn’t seen it anywhere in the world at least once… Personally, it’s hard for me to see “Revelations” without missing or imagining Judith Jamison dancing her iconic role, which always appeared as if she were towering over the other dancers, and bigger than life itself. I also miss a time when people in the audience weren’t turning on their cell phones like pocket flashlights and stayed focused long enough to take in Ailey’s work of art no matter how many times they’ve seen it. Program C is a solid, a smart line up that will leave you either in an uprising or in revelation of your own.