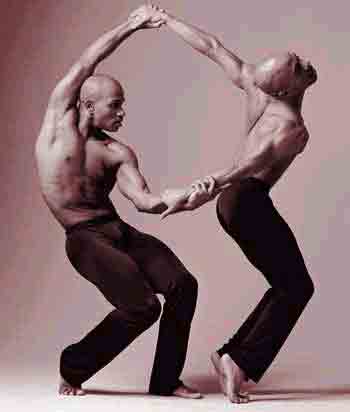 The Alvin Ailey American Dance Theater just gets better and better as time goes by. In residence for a week at UC Berkeley&#146;s Zellerbach Hall, the company is showcasing some things old and some things new and, in the &#147;old&#148; category, Ailey&#146;s signature favorite, Revelations, is on almost every program.

Dearly as one might love Revelations &#150; and more of that later — it was something new that knocked the audience&#146;s collective socks off at the opening Program A. Lynne-Taylor Corbett&#146;s Prayers From the Edge is one of the most exciting dance works this reviewer has seen in a long stretch of seeing dance works. Next to the Abbey Theater&#146;sMedea, it is the most exciting piece of theater as well. Prayers was created last year by well-known Broadway choreographer Taylor-Corbett (Swing, Titanic), a former Ailey dancer, as part of Ailey artistic director Judith Jamison&#146;s 1994 Women&#146;s Choreography Initiative. A loose retelling of the Romeo and Juliet story, it was inspired by conditions in Israel following the 1967 Six-Day-War. Everything old is new again.

There are two tribes (there always are two tribes), in this case the Gold and the Red. As the curtain rises, Taylor-Corbett establishes the tension between them in their movement. The Reds are as volatile as their colors, rushing across the stage in quick, thrusting movements. The Golds move slowly, contemplatively, powerfully. The section is aptly entitled &#147;Prayer for Power.&#148; In a twist on Shakespeare, the first crossover friendship is formed between two women, a Red tribe member, danced by Asha Thomas, and the Juliet figure from the Gold tribe, Linda Celeste Sims. Neither can understand what all the feuding and fussing is about. They are just two young girls, cavorting in the rain. &#147;Prayer for Another&#148; echoes the ballroom scene in Romeo and Juliet, as Sims and Clifton Brown discover each other amid dancing couples. &#147;Prayer Interrupted&#148; is the marketplace scene with the fight between the warring factions and the death of a Gold tribesman. A finger is pointed at the Romeo figure and he flees. &#147;Prayer for Love&#148; is the bedroom scene, a pas de deux for the lovers that illustrates the particular fluidity of Taylor-Corbett&#146;s movement style. After the moving death scene, Thomas closes the work with the mournful solo &#147;Prayer for Peace.&#148; In addition to the principals, Matthew Rushing was outstanding as a kind of shaman or priest. The whole thing is set to Peter Gabriel&#146;s music from Passion, a wonderful modern score with rock touches and a Middle Eastern flavor.

A hard act to follow but the Ailey troupe was up to the challenge. Black Milk comes out of Israel, choreographed in 1984 by Ohad Naharin for the women of the Kibbutz Contemporary Dance Company. It was re-cast in 1992 for five men. It is this version that we saw on the Zellerbach stage, set to the minimalist marimba score of Paul Smadbeck. There is only a shadow of a story but what exists is powerfully told. Four of the men cluster together, one sits apart. Each of the four ceremonially smears himself with black mud from a bucket. Reluctantly the loner does the same. They dance frantically, to the point of exhaustion, calling up images of the corporate rat race. Finally, the renegade washes the mud off with water from the same bucket (how did they do that?) and breaks free. The work ends as it began, with the herd huddled in one corner; the freethinker in his own space. Brown, Rushing, Jeffrey Gerodias, Jamar Roberts and Glenn A. Sims made a powerful ensemble in this brief, absorbing work.

After all that abstraction and modernity, it was something of a relief to hear the first notes of the suite of African-American spirituals that is the score of Revelations, a 1960 Ailey work that has stood the test of time to become a classic in this company&#146;s repertoire. Doesn&#146;t matter if your favorite is the high-stepping parasol-toting &#147;Wade in the Water,&#148; those gossipy church ladies waving their fans in &#147;The Day is Past and Gone,&#148; the tortured male trio (Dion Wilson, Anthony Burrell and Samuel Deshauteurs) of &#147;Sinner Man&#148; or the powerful solo &#147;I Wanna Be Ready&#148; (Gerodias). It all comes together in the rocking full-company finale, &#147;Rocka My Soul in the Bosom of Abraham,&#148; such an infectious crowd-pleaser that it traditionally is performed as an encore.