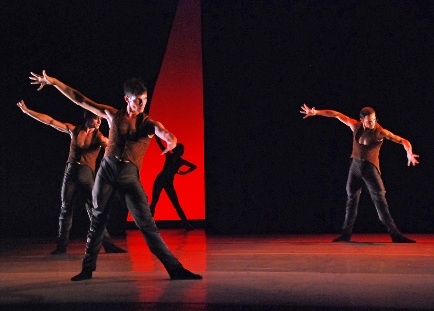 Program A, mixed repertory (“Fold by Fold,” “Beautiful Mistake,” and “Like a Samba”)

In addition to raising funds, booking engagements, mothering dancers and generally running a ballet company, another of the important hats worn by Jean-Philippe Malaty and Tom Mossbrucker, the duo who run the Aspen Santa Fe Ballet wear, is that of choreographic talent scouts. They’ve successfully carved out a niche for themselves as a small company with a big reputation by finding up-and-coming choreographers in Europe, and, more and more, the U.S. Recently, with a young Filipino-American dancer/choreographer from Los Angeles, Norbert De La Cruz III, they have struck gold.

Cruz’ first piece for AFSB, “Square None,” was a bit of a hodge-podge, with a musical score that jumped around in its sources and styles. Yet De La Cruz still managed to unify things and offer an arresting blend of movement and image. “Fold By Fold,” his second piece on AFSB, seen onstage in Santa Fe in mid-July after an earlier premiere in Aspen, is a mature, dynamic, and satisfying piece of work . This is a choreographic voice that is not going to fade away.

A striking, original score, by Michael Gilbertson, offered music that was highly danceable, with classical bones and a contemporary sensibility. There were pianistic sections, marimba and percussion in other parts, and a constant walk-on-the-edge between lyricism and dissonance. Each of these musical factors was successfully developed by Cruz and embodied by the dancers.

This is a dance that plays on the best qualities of the company — they have a consistent style of attack and uniform athleticism, which makes for powerful group formations and unisons. There was also a visible sense of dancerly authority on Friday night, which seems new. In previous seasons, commissioned dances were sometimes shakey at the outset, and then amazing a year later, after dozens of performances on the road. It was as if the choreographers hadn’t finished the pieces in time for the dancers to fully own them, physically. This time, there was not an iota of indecision. In particular, Paul Busch, Seia Rassenti and Joseph Watson offered almost recklessly confident dancing.

“Beautiful Mistake,” another new piece on the program, created for AFSB by Cayetano Soto, the Spanish choreographer who has an ongoing artistic relationship with the company, suffered in comparison. It had the same dark palette and edgy movement vocabulary as the De La Cruz piece, but without the musical unity (it was set to two different pieces, by Ólafur Arnalds and Charles Wilson). It also lacked a satisfying resolution. It came across as a series of ideas looking for a home.

Soto’s works offer impressively athletic, angular partnering. If Seah Johnson, the talented lighting designer for both dances, had been able to talk Soto into a world of color and light, his dance might have looked totally different. As it was, it was yet another dance from him that takes place in a somewhat bleak and shadowy night. For a company based in such a physically beautiful locale, it’s surprising that so many of the pieces in the repertoire have a similarly angsty, urban quality to them. They should find the money to send these choreographers on a hike.

“Like A Samba,” the closer on the program, was Trey McIntyre-light, but added color and joy, and a welcome levity to an otherwise intense evening. Samanta Klanac Campanile and Seia Rassenti looked lovely en pointe, and Paul Busch, Peter Franc and Nolan DeMarco McGahan created powerful silhouettes. All in all, however, the choreography was mainly textbook classical, which left the dancers slightly at odds with the music — the soft, sexy Brazilian hits of Astrud Gilberto.