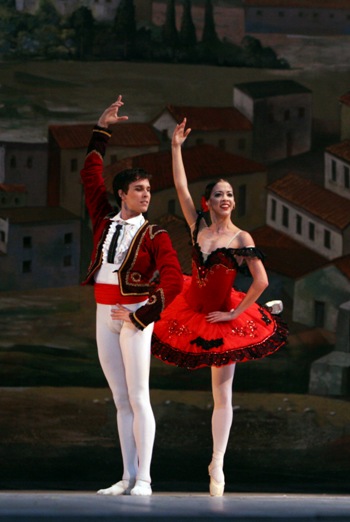 What a difference a week, or more, makes. After reading the Los Angeles Times and New York Times reviews of the earlier performances by the Ballet Nacional De Cuba on its current U.S. tour, I was truly reluctant to catch them at the Music Center. “Don Quixote” was an entertaining surprise.

To enjoy the Cuban company, start with the understanding that what you are going to see is a truly classical ballet troupe. They come by this description honestly. You will not be pleased with the performance if what you are looking for is modern interpretation. Ballet Nacional de Cuba was founded by Alicia Alonso in 1948, while she was a principal dancer at American Ballet Theatre. The 91-year-old Alonso continues to be the company’s artistic director. Innovation is not her raison d’être. Her devotion is to beautifully executed high point, clean leaps and endless pirouettes performed with bravado. The dancers deliver the goods with exuberance.

Although somewhat trimmed down from Petipa’s original four-act format, the Alonso two-and-a-half-hour-plus rendition is a long and taxing performance for the dancers. Young Dani Hernández, who barely looks old enough to be the prom king, danced the part of Basilio, the village barber and Kitri’s true love. His performance grew in strength and he delivered a flawless solo in the third act, unhampered by the gravity that afflicts us other mortals.

In the role of Kitri, Anette Delgado, is ceaselessly demanding. The fresh and flirtatious Delgado continues to build flashy turns and leaps in dazzling sequence, but was, understandably, more daunted by the extended sustained balance required late in the third act, at the point of exhaustion for mere mortals. But, that is the idea, no? Dancers are not supposed to be mortals.

Nowhere in the modern world has devotion to classical dance been more fervent than in the Communist Bloc countries. Ironically, the classical ballets they are devoted to are often elitist tales of wealth and privilege, not the triumph of the humble that would be so much more politically correct. The current Cuban population is composed of a significant minority of African lineage. One wonders why the complexion of the Ballet Nacional looks more like the Royal Danish Ballet. In the meantime, international companies are proud to accept Cuba’s outstanding dancers of all colors.

One reason for the vitality of the performance at the Chandler may be the high quality of the LA Opera Orchestra. Conducted by the ballet’s own Giovanni Duarte, the musicians delivered a spirited, if not nuanced, support for the dancers. The difference in orchestras between LA and Orange County may in fact account for the apparently more vital performance than was delivered there last week. While the orchestra was vibrant, Duarte’s interpretation pulled endless applause that often disrupted the flow of the performance. Los Angeles audiences are increasingly prone to this behavior and milking it for more does not enhance.

Yes, “Don Quixote” is a relic of the past, but like many fine antiques, it still glows.