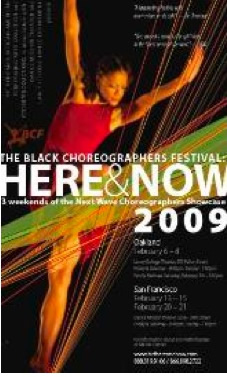 Thanks to Kendra Kimbrough Barnes and Laura E. Ellis, festival diretors, the Bay Area continues to celebrate the annual Black Choreographers Festival. These women, and the talented artists and performers they have gathered, have produced an amazing series of events, seen at Laney College in Oakland and at Dance Mission in San Francisco. Each program of the six day presentation has different events.

The featured work on the February 13 program was "Acqui e Agora", "Here and Now" choreographed by Isaura Oliveira of the Teatro Brasileiro de Danca. To the traditional African Brazilian rhythms performed by Abel Damasceno and his drummers, five women and one man, guest dancer Rodson Santos de Jesus, performed a series of rites, each designing elegant patterns in space, each using simple effective movement. The piece changed from slow deliberate walking rhythms to fast paced runs and jumps, responding to the fine musical score. In one episode, the women spread beautiful scarves on the floor, using them almost as prayer mats. Oliveria, who teachers at Dance Mission, must be congratulated for bringing this offering of Brazil to an American sensibility.

The other works on the program were charming but not distinguished, either because there was a lack of choreographic development or because the material was not ready for performance.

"Mother Africa" choreographed by Teela Shine-Ross began with dancer Willa Bontle Willis’ entrance using lively arm gestures, circling long scarves that lay on the floor. She was followed by Dahrio Hulton and a semblance of a duet began, but after some lifting and stretching the scarves, the piece disintegrated. More phrases would complete the action.

To a familiar Brandenburg Concerto (No. 3 in G Major) five women, using "pedestrian’ gesture, familiar to today’s teenagers, inspected someone’s boy friend and seemingly found him unsatisfactory. Except for exclamations of "oh!, " "ow," and "ugh," and various posture/gestures, there was no dance movement per se. The piece ended with the girlfiend remarking, "Well, you’ll meet my parents tomorrow." Charming but insufficient.That was also the case with "Mood Swing" choreographed by Luis Napoles. Four women in toe shoes executed complex acrobatic moves, all done very well, but without any context. It reminded this reviewer of the old vaudeville days of "tap/toe/acrobatic" variety.

A more serious piece was "Bondage" choreographed and performed by Jefaun Maxwell. A voice over tape told the story of a mother’s response to the start of her daughter’s menstrual cycle. Using a red ribbon, Maxwell showed us through dramatic movement and gesture, how she was effected by the humiliation. The ribbon was tied from her lower to upper body and the story progressed. It was a difficult subject, well handled.

Also on the program was "The Journey" to music by Nina Simone and Timberland. Dressed in colorful outfits, five women combined movement influenced by the African-American tradition with modern dance moves. The piece, by Michelle Ned, was lively and effective. A colleague remarked, "We all dance African dance now."

The Festival continues on February 20 and 21 at Dance Mission with works by eleven more artists. It is important to the Dance Community to support these events and to appreciate the range of work presented.