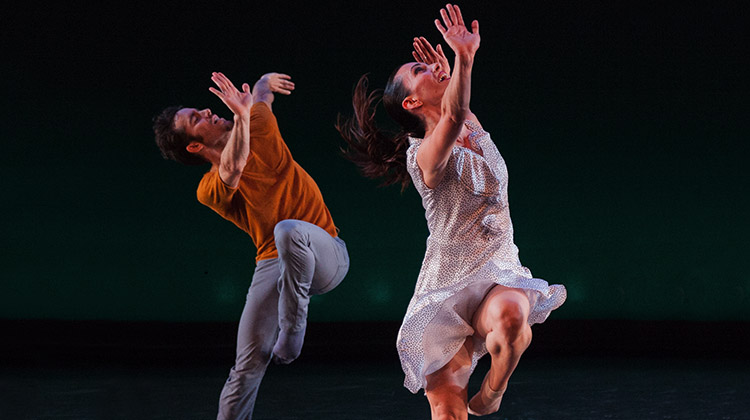 The seven-year-old Los Angeles dance troupe BODYTRAFFIC careened into Philly for three performances at the Annenberg Center last weekend, were it is obvious that they have a solid fan base in Philly after only a couple tours. On the program of the company’s repertory and highlighted by a preview by L.A. choreograph sensations Wewolf and a new work by Matthew Neenan, resident choreographer at Pennsylvania Ballet, which he created for Bodytraffic in 2018.

The concert opened with the arresting “Fragile Dwellings” choreographed by Stijn Celia, set to a cappela choral music by Arvo Part and Pierre Boulez. I Celia’s elegiac movement meditation is ‘about silence and emptiness’ and “is dedicated to the homeless Los Angelinos,” Celia’s notes in the program.

Joseph Davis states the movement themes in an opening solo, it is both somber, meditative and choreographically radiant. Nathalie Lebert, Jessica Liu, and Jamal White all with equally powerful solos, very expressive of each dancers’ unique physicality. Bands of pearl lights descend from the rails creating a mystical dance labyrinth.

Joseph Davis and Guzman Rosado are the soloists in ‘Resolve’ by the L.A. based choreographic innovators Wewolf  (aka Rubberlegz and James Greg) who create duets that sculpt bodies in ways you likely haven’t seen. Past the choreographic mechanics, the movement artistry is both hypnotic and explosive.

“Resolve” set to clubby electronic percussive by DJ Tennis, with some acid bled sonics laced in.  The pulse ignites the dancers in and out of a rectangle spotlight, an arena that in fact, it gets a little pugilistic between the dancers. Each man with intricate moves that are muscled, steely and so lyrically supple.   A dance challenge that ends them up in intricate and fluid body interlocks like pieces of a movement puzzle and laced with low flying layouts and flips, the lyrical transitional movement that just keeps evolving.  A virtuosic piece as conceived by Wewolf and danced by Davis and Rosado.

Matt Neenan’s “A Million Voices” scored to music by Peggy Lee, recorded during WWII when Lee was among the best of the big band singers. Lee’s music from this era is now much lesser known her solo hits. All of the Bodytraffic dancers are in a fab outfit, and characters that reflect a snapshot of America.  This piece displaying so many unexpected things, for starter Neenan seemed to be introducing a choreographic stream that he rarely taps. Gone are choreographic signatures of his lighter pieces and he is newly inspired by this era’s music and Lee’s voluptuously subtle vocals.Lee’s songs for an America at war, call for a united home front and solidarity as Americans fighting the good fight for all.  Johnny Mercer’s ‘Freedom Train’ by the Benny Goodman Orchestra when Lee was one of the Pied Pipers. “Freedom Train” (“where the engineer is Uncle Sam”) was a call for unity, diversity, and freedoms secured for all. Lorrin Brubaker is part of the train, but as the others chug on, Brubaker’s body stalls and convulses as he jerks around and views what is happening 75-years later after the Greatest Generation saved that freedom.  The circus is the first image of Neenan’s dance satire set to ‘”Is That All There Is,” the bitter art song by Jerry Leiber and Mike Stoller that turned into one of Lee’s biggest hits in 1969.

Neenan runs with the line ‘If that’s all there is, then let’s keep dancing, let’s break out the booze and have a ball.” Dreamy soulful duets with one straight couple, one gay male (“and then I met the most wonderful boy in the world”);  drinks are poured over people’s head and lovers and other strangers break up. And the Fait accompli (“I know what you’re thinking if that’s the way she feels about it, why doesn’t she end it all…..”) Neenan is inside the musicality and drama of this song as a sharp j’accuse to our country scored to a narrative still is a knockout punch delivered by the inimitable Peggy Lee.

Nothing quiet about Ohad Naharin’s “George & Zalman” and as much as one can admire Naharin, it is just baffling why his solo piece gets programmed so often. The dancer is stranded onstage to a voiceover of ‘poetry’ by Charles Bukowski is banal, itemized ranting, but the biggest offense is the boredom he unleashed without a hint of poetic craft. This narration is on a repeat loop so he can add another mind-numbing word, then back to start, with Naharin tacking on a new phrase. Tina Finkelman Berkett (the company artistic director) displays Zen master focus and artistic control on this choreographic torture chamber.  One can only wish that she would be dancing these moves straight through to no soundtrack at all, because the choreography itself, is interesting.

The closer, in contrast, was Choreographer Richard Siegal’s “o2joy” is scored to a wily mix of jazz tunes by the great Oscar Peterson to Glenn Miller. Jessica Liu is the beaming soloist bursting with joy on Billie Holiday’s rendition of “On the Sunny Side of the Street.” Joseph Davis does a flawless lipsync to Ella Fitzgerald’s and with full-throttle dance moves, tres campy, but not as easy as he makes it look. Cue Ru! Tons of fun, Bodytraffic could tighten up those Lindy moves on ‘Taps Miller’ though, they definitely have the esprit and the velocity to let it really swing.