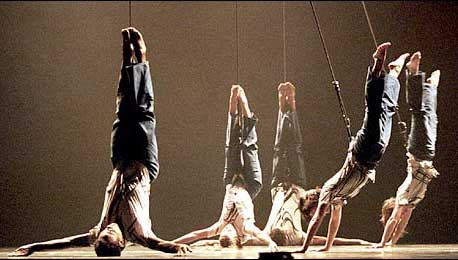 It was Stomp meets Peter Pan at the American Dance Festival, when Brenda Angiel&#146;s Aerial Dance Company appeared at Page Auditorium. Thanks to the wonders of pipe-rigging, circus technology and mountain-climbing apparatus, modern dance has begun to leave the ground all over the world. This group comes from Buenos Aires.

The International Aerial Movement includes endless variations on the theme of hanging upside down. Angiel uses bungee cords and high-tech lighting to up the ante. Her music is rock-tinged and bumps into exciting overdrive from time to time. But the aesthetic place where she hopes the whole evening to land, on the &#147;high&#148; artistic side of the spectrum, is still not happening. You can take flying out of the circus, but you can&#146;t take the circus out of Angiel&#146;s choreography. It&#146;s like watching a ballet-trained stripper–hard to figure out what or how to admire.

There were moments of hovering stillness and plenty of action-packed sections based on unison movements with rows of bouncing, spinning and flying dancers. Everything was tempered, however, by the clunky realities of ropes and bungee cords and harnesses. Gravity sucks, there&#146;s no way around it.

&#147;Air-Lines,&#148; a world premiere, was five people hanging from a wall. The metronomic musical score, by Juan Pablo Arcangeli and Martin Ghersa, set up a rhythm that was followed ploddingly to the end by the dancers, who made themselves endlessly into human letters, a bunch of Y, M, C, A&#146;s against a cement-block wall. The other premiere on the program, &#147;Air Force&#148; (a modest proposal: no more titles using the word, &#147;Air&#148;), had a slow-as-molasses pace to it, dancers hanging in slacker uniform: jeans and plaid shirts– and a David Lynchian feel, due to a derivative musical score by the same composers.

The most joyous, &#147;Peter Pan&#148; minutes of the evening occurred in the second piece, &#147;Air Part (2000),&#148; where everything was bungees, flying and fun. Leonardo Haedo began things with a one-armed solo; Natacha Visconti and Haedo next danced with one bungee-bound leg each, and the last section featured three red-dressed Wendies–Ana Armas, Viviana Finkelstein and Cristina Tziouras–who sprang, flew, and bounced before being eventually joined by earthbound boyfriends, Pablo Carrizo, Haedo and Abel Navarro. Things looked very &#147;Crouching Tiger, Leaping Whatever&#148; with the women so much more springy and nimble than the men. But the final moments came with a slap. In a flash before a black-out, an image of triple suicide, the three women hanging with their necks broken and the men, hugging their feet, stopping their swinging. Where did that come from?