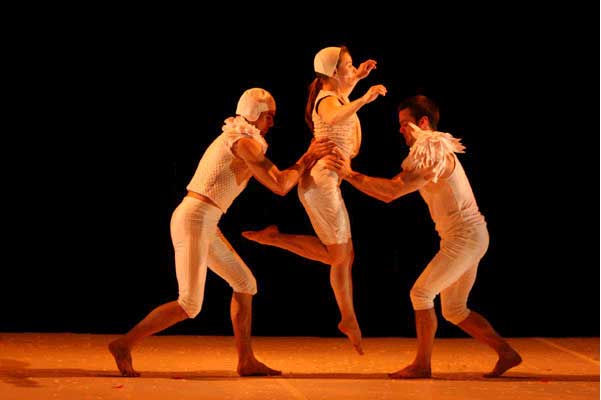 The future of dance is a talking pinata. Go ahead and laugh. Brian Brooks Moving Company, an up-and-coming Brooklyn-based group making its American Dance Festival debut, humbly makes the argument that humor, along with a kindergartenesque approach to the world, is not only justified in 2005, but logical. And shortly after Mr. Pinata, a little papier-mache donkey in a spotlight, opens the show with a comic voiceover about cellphones and the company website, another pinata is lowered from above, to be bashed open by little "girl" with a big stick. Guts get spilled. That&#146;s life.

Pinata, a new 70-minute piece completes Brooks&#146; color saga. First there was a pink dance, Dance-o-Matic (2002), then a green dance, Acre (2003), and now, in 2005, part three, the finale, this multi-colored extravaganza with confetti. Brooks has a painterly interest in things. But, he&#146;s fun, too. Songs by Cesaria Evora, the Scissor Sisters, Senor Coconut, Cyndi Lauper and Maurice Ravel create a soundscape that could only make sense on an IPOD or in Brooks&#146; brain, which has a clear predilection for pop culture.

This is all filled in with birdsong and synthesizer in a score by Tom Lopez. The dance itself, handled by a quintet of likeable performers including Brooks, comes at you like TV, like Sesame Street segments, a series of episodes, really, each a different dance with a different song, a different color, and a different "look".

The stage is a coloring book for Brooks, who starts with a glistening blank whiteness, then falling snow and dancers in football uniform pants, Elizabethan collars, feathers, lacey briefs and aviator hats, also all in white. More confetti comes on, and with it the first touch of color, orange, tossed from the hands of dancers, Hard Nut style, during flex-footed side-leaping crossovers. These "steps," like a lot of Brooks&#146; choreography, are almost, but not quite, pedestrian. The influence from his work with Elizabeth Streb, a choreographer with a body-slam aesthetic, is evident in the deliberate gracelessness and extended use of the floor, upon which dancers are scooting, lying down, jumping like Mexican jumping beans, or taking Pilates exercises to the extreme.

Each dance leaves its trace. Orange confetti gives way to red, green, blue and yellow. The stage becomes a cartoon-colored carpet with a big, red X. Finally, striding through all the detritus, the dancers stand in a semi-circle like the finalists of a beauty pageant, wearing turn-of-the-century ball gowns, in black. It&#146;s time for Bolero in drag. Ravel&#146;s endless anthem builds and builds and builds, but Brooks has his dancers wave their hands around in complicated gestures that read as a kind of romantic sign language. They never take a step.

Don&#146;t laugh. The future of dance may have not much to do with dance at all if Brian Brooks has his way. And that&#146;s not necessarily bad news.