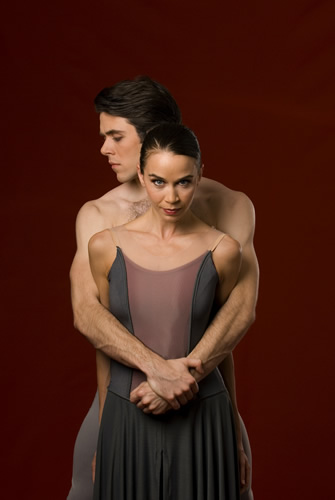 Houston Ballet Jubilee of Dance: A Celebration of Movement December 1, 2006

Houston Ballet throws an on-stage dance bash every December appropriately named Jubilee of Dance: A Celebration of Movement. It’s a perfect time for artistic director Stanton Welch to show off his fine company and work. It’s also a perfect opportunity for the dance skittish to get taste of what’s happening at Houston Ballet. The first half consists of short excerpts from several pieces. If one is not to your liking, sit back, the next one will come along in a minute or two.

Highlights of the snippets included excerpts from Welch’s Orange, a work yet to be seen in its entirety in Houston. Orange is far too pedestrian a title for this elegant dance. Mireille Hassenboehler, always a wonder to watch, luxuriated in Welch’s broad stokes, expertly partnered by Andrew Murphy. To call Amy Fote’s performance weightless would be an understatement—masslessness might better describe Fote’s feathery comfort in the airspace. Increasingly, she’s coming into her own on stage these days, bringing a subtle crispness to every move. Never mind that this subtle crispness happens two feet above the floor. (Fote was deservedly promoted to principal at the conclusion of the evening.) Her partner, Carl Coomer, also delivered a clean and polished performance. No less wonderful were Sara Webb and Ian Casady in the fourth movement of Orange. Webb brings an airy earthiness to the part, if you can imagine that; it’s a quality of lightness that comes with substance, not unlike the color orange itself. Casady merges so beautifully with Webb we see the two as one in Welch’s tangled partnering.

Soloist Connor Walsh established himself as one to watch in his charming solo, Les Bourgeois. Set to one Jacques Brel’s saucy songs, Walsh stumbles about, drunk, desperate, and despondent. However, none of that gets in the way of pulling off bursts of virtuosity. His technical bravado surprises at every turn, jump, and wild landing. Walsh, a huge soccer fan, gave up soccer to dance. His rough and tumble boy’s life shows though in his dancing. He’s a dare-devil and not afraid to dance on the edge of falling. Did I mention that he performed most of the dance with a cigarette dangling from his mouth?

The opening section, O Fortuna, paired precise music matching arm gestures with a flock of groveling dancers. Welch set up his visual tension of high vs. low in these opening moments. A pull to earth and push to sky played out wonderfully in the duets and ensemble work and echoed Orff’s dichotomy of the sacred vs. the profane. A second tension emerged in Welch use of the stage space. With the dance unfolding directly in front of the chorus he sets up a tight container. Consequently, the dance straddles a sense of austerity and intimacy. Not an easy task, but perfect for the oscillating emotional tone of Orff’s score.

Walsh as “The Man” held his ground and showed off his carved sense of detail in Welch’s uber-precise choreography. Fote, Barbara Bears, Casady, and Melody Herrera, Randy Herrera, and Yoshimoto each brought a depth of character demanded by Welch’s work. Christina Giannelli’s lighting design created a haunting quality—dark, medieval with glimpses of luminosity. She kept all but the chorus faces in the dark which accentuated the confrontational and urgency inherent in Orff’s score. Strong directional side lighting lifted the dancers even higher. Vocal soloists, Heidi Stober, Richard Kosowski, and Lester Lynch each brought necessary intensity and the Houston Ballet Orchestra, under the masterful direction of Ermanno Florio, sounded simply divine.