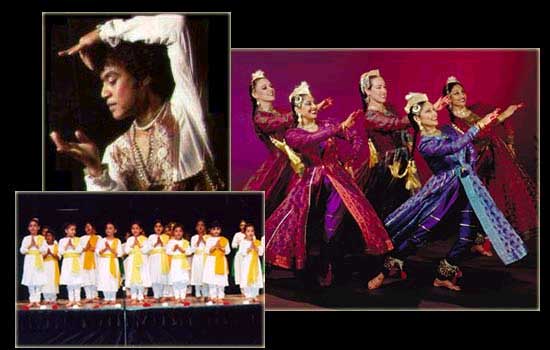 Kathak is a dance form for accountants. Numbers, numbers, numbers. Originally developed in Northern India by kathakas–Hindu storytellers who traveled from village to village telling the stories of the Ramayana and Mahabharata–the form evolved, once the Muslim Moguls began running things there, into a technical and rhythmic dance, with lots of spinning, ankle bells, and stylized necks, heads, wrists, eyebrows and breathing coordinated specifically with the counts of the music.

San Francisco audiences had a unique opportunity to sample Kathak two ways, as the Chitresh Das Dance Company presented a semi-traditional version of the dance, in Tarang at the ODC Theater, while the highly touted British choreographer, Akram Khan offered his evening length work, Kaash at Yerba Buena Center for the Arts as part of the San Francisco International Arts Festival. Khan, who was recently the first choreographer to be appointed an Associate Artist of the Royal Festival Hall in London, takes the basic form of Kathak and sends it spinning into another galaxy.

Pandit Chitresh Das himself ran his performance like a lecture-demonstration, with lots of narration, introducing the excellent visiting musicians, who were placed on a carpeted platform downstage right, explaining how difficult the fact of talking, singing, dancing and counting at the same time was, and then showing us how it was done. He was like Lawrence Welk, an aging leader coming out to show off his pretty dancers and egg-on the musicians with banter and his own occasional feats of fast-footed dancing. All in all, the evening had the sense of a dance school recital, except these dancers had the good fortune to appear with some mightily proficient musicians. The dance company, which spends part of the year touring India with the boss, was a multi-ethnic group that came out in pretty costumes, flashed smiles as they danced, and seemed like ideal entertainment for a tourist attraction or cruise liner.

When Akram Khan&#146;s company hit the stage, across town, it was clear that this bastard form was all about speed. The same basic spins that the shiny-gowned Citresh Das dancers pulled off like Can-Can dancers doing kicks, looked like tornadoes on the Khan people. With all their endless momentum, the thrown, jagged arms, the stage patterns and up-to-the-minute drum and synthesizer score by Nitin Sawhney, it was clear this wasn&#146;t ethnic dance, it was a force for a new century.

Khan&#146;s work is as modern as Wi-Fi, trancelike and ecstatic, and yet as highly structured as a tax table. He explored themes such as "Hindu Gods, black holes, Indian time cycles, tables, creation and destruction" and then set it all into patterns that moved and repeated and came into lighting-speed unisons before breaking apart. It was fresh, exhilarating, and a world apart from the happy exoticism of the Chitresh Das group.