https://www.youtube.com/watch?v=5nkJVAZ1cF4
Dance
Written by:
John Sullivan
Share This:
Program 2 ("Tears," "From Foreign Lands," "Borderlands") and Program 3 ("The Kingdom of the Shades" from "La Bayadère," "Ghosts," "Firebird")

John Sullivan has been an editor and writer for newspapers, magazines, and websites on both coasts since the 1980s, including the New York Daily News, the San Francisco Chronicle, and an online start-up for the Wall Street Journal. He resides on his ranch in Northern California.

Choreographers past and present were on display in two recent programs from San Francisco Ballet, and their defining styles (or lack thereof) gave audiences a broad canvas of talent and themes to contemplate.

Program 2 (seen Feb. 27) opened with the premiere of “Tears” by Val Caniparoli, a longtime character dancer with the company and, less convincingly, a choreographer. This is one of those pieces that seems more a collection of dance fragments than a cohesive whole centered on an identifiable theme. In his “artist’s statement” (a rather pedantic addition to the program notes), Caniparoli states that “Water is an apt metaphor for connectedness. … and in troubled times, it flows in the form of tears.” All right then. Except the music he chose (Steve Reich’s “Variations for Winds, Strings and Keyboards”) sounds more like perfunctory rainfall, repetitive and impersonal. At one moment, Caniparoli’s steps make the dancers look as though they were taking a shower, then he hurries them into patterns of no discernible intent (are the couples lovers, or are they strangers who bump into one another, itching for connection?). The set (by Sandra Woodall) includes two long screens, one horizontal, the other vertical, that appear to be woven of reeds and grass (so much for the water theme), and Caniparoli attempts to engage the dancers with these behemoths by having them scramble under them in awkward lunges. The three couples enter and exit randomly, doing a little of this and a little of that (lifts and those cliché modern drags, mostly). Lorena Feijoo and Vitor Luiz made sincere attempts to give this disjointed work some human feeling — their fluid, athletic effort was interesting to watch, if not particularly moving. And Benjamin Stewart danced his heart out, also trying to connect on some visceral level. But their valiant efforts could not save this work from its inherent mediocrity. Caniparoli may have aspirations beyond his clunky “Lambarena” of almost two decades ago (and he certainly has had a prodigious output since then), but without more thought and execution, they only amount to pretensions.

Fortunately, “From Foreign Lands” (the second piece on the Program 2 bill) offered both musical and choreographic relief. Alexei Ratmansky, artist in residence at American Ballet Theatre, dreamed up this whimsical, old-fashioned tribute (it premiered last season) to a number of dance styles typical to the folk traditions of Europe, set to Moritz Moszkowski’s suite for orchestra of the same name. The superb logic of the ballet’s structure (five quartets and an octet, capped by an ensemble, each indicative of a particular country’s dance techniques) recalls Balanchine’s forays into ethnic genres and certainly echoes that master in its flashy steps, performed with giddy abandon by the company’s principals and corps members alike. In the Russian quartet, Frances Chung and Sasha De Sola, partnered gallantly by Davit Karapetyan and Gennadi Nedvigin, demonstrated their capacity for seemingly effortless poise, and Sofiane Sylve, as the sole female in the German quartet, added notes of grace and delicacy (look for her as a contender to replace Yuan Yuan Tan as the company’s prima ballerina). The ensemble finished with the Hungarian allegro, all high kicks and exuberant flash. This was one fun ballet to behold.

Although it seems shameless to say so, “Borderlands,” the final work of Program 2, can leave even the most ardent fan of modern dance out in the cold. Created for SF Ballet last year by Wayne McGregor (the resident choreographer of the Royal Ballet and founder/director of his own company, Random Dance), this chilly, angular piece takes as its inspiration abstract painter Josef Albers’ “Homage to the Square,” often a bit too literally. McGregor’s groupings, such as they are, seem intentionally stilted and one-dimensional, rarely offering a hint of sensuality beneath the physical contortions he puts the dancers through. A loud and scritchy-scratchy electronic score, by Joel Cadbury and Paul Stoney, doesn’t advance any themes beyond alienation and indifference, which might be all that the choreographer had in mind to represent. The dancers, undaunted by these limitations, give it their all, with Pascal Molat, James Sofranko, Maria Kochetkova, and Sarah Van Patten looking particularly committed in their execution. Like the choreographer’s “Chroma” (also in the company’s repertory), “Borderlands” has an edginess that is never boring. But that doesn’t necessarily make it as satisfying as similar modern dances the company has performed — William Forsythe’s “In the Middle, Somewhat Elevated” comes foremost to mind. The visceral appeal of that work, 25 years old and counting, overshadows McGregor’s effort, making the latter appear meager by comparison.

In Program 3 (seen Feb. 26), “The Kingdom of the Shades” opened the bill with a pure ballet — beautiful, symmetrical, and seductive to the mind’s sense of order and aesthetics. The justly famous opening scene — 24 ballerinas in a stately procession of arabesques down long ramps to the stage — sets the tone for the rest of this exquisitely classical excerpt from the full-length story ballet “La Bayadère,” whose plot is incidental to the mastery of the choreography here (restaged by renowned dancer Natalia Makarova, based on Marius Petipa’s original, and set on SF Ballet by Susan Jones of ABT). Yuan Yuan Tan exhibited the finesse and pliability the role of Nikiya demands, and though stiff in his partnering at times, Davit Karapetyan certainly mastered his double cabrioles and tours en l’air, at one point completing a series of them en manège to breathtaking effect. The corps never made the precise line of the work seem slavish or outdated, imparting such moving and beautiful emphasis to the unison steps as to elicit enthusiastic applause from the audience. 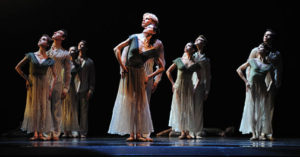 “Ghosts” (photo above; © Erik Tomasson) is a different work altogether, a modern turn on a classical theme of spirits, much like the shades of “La Bayadère.” The pairings here are gorgeous, definitely classical, and choreographer Christopher Wheeldon creates balanced ensembles onstage with the skill of a master. But he also throws in modern bits (an arm-over-head gesture, a writhing on the floor — all of which recall Mark Morris, whom Wheeldon seems to be replacing as the go-to choreographer for works marrying classical and modern styles). The dancers float in from the wings, glide through a few turns and lifts, then exit airily, as if in flight. C.F. Kip Winger’s score and Mark Zappone’s costumes further Wheeldon’s diaphanous intentions. The inspired core of the piece comes in its pas de deux (danced expressively by Maria Kochetkova and Vitor Luiz), a lyrical and moving examination of recollected love and tenderness.

As a finale, there was “Firebird,” which SF Ballet’s artistic director Helgi Tomasson should consider retiring from the repertory, in spite of its mass appeal. This orange fright-wig cuckoo flies too liberally off course from the true Stravinsky, given how resident choreogher Yuri Possokhov veers toward silly shtick, flashy effects, and lowbrow humor. Not to mention a kind of Broadway bump-and-grind that demeans the technical prowess of the dancers available to him. (My astute seatmate, Kevin VandenBergh, called the work “more Bob Fosse than ballet.”) Although the title role seems to have been created for Yuan Yuan Tan, Jennifer Stahl assumed the part on Feb. 26 and acquitted herself quite nicely, steering clear of showiness, though her Prince (Luke Ingham) tended toward exaggeration. It was nice to see Stahl exercise an economy of means, even as everyone and everything around her worked it like a Vegas revue.

“How long have we been asking these questions?After how many trains taken?” Rinde Eckert, Michael Palmer “Global Moves” mysteriously begins...
Dance

So what is Bach’s St. Matthew Passion? It is presented this month at the Dorothy Chandler by the LA Opera....
DanceMusic

Speaking to a nearly sold-out audience at the Academy of Music on March 3, Philadelphia Ballet artistic director Angel Corella...
Dance