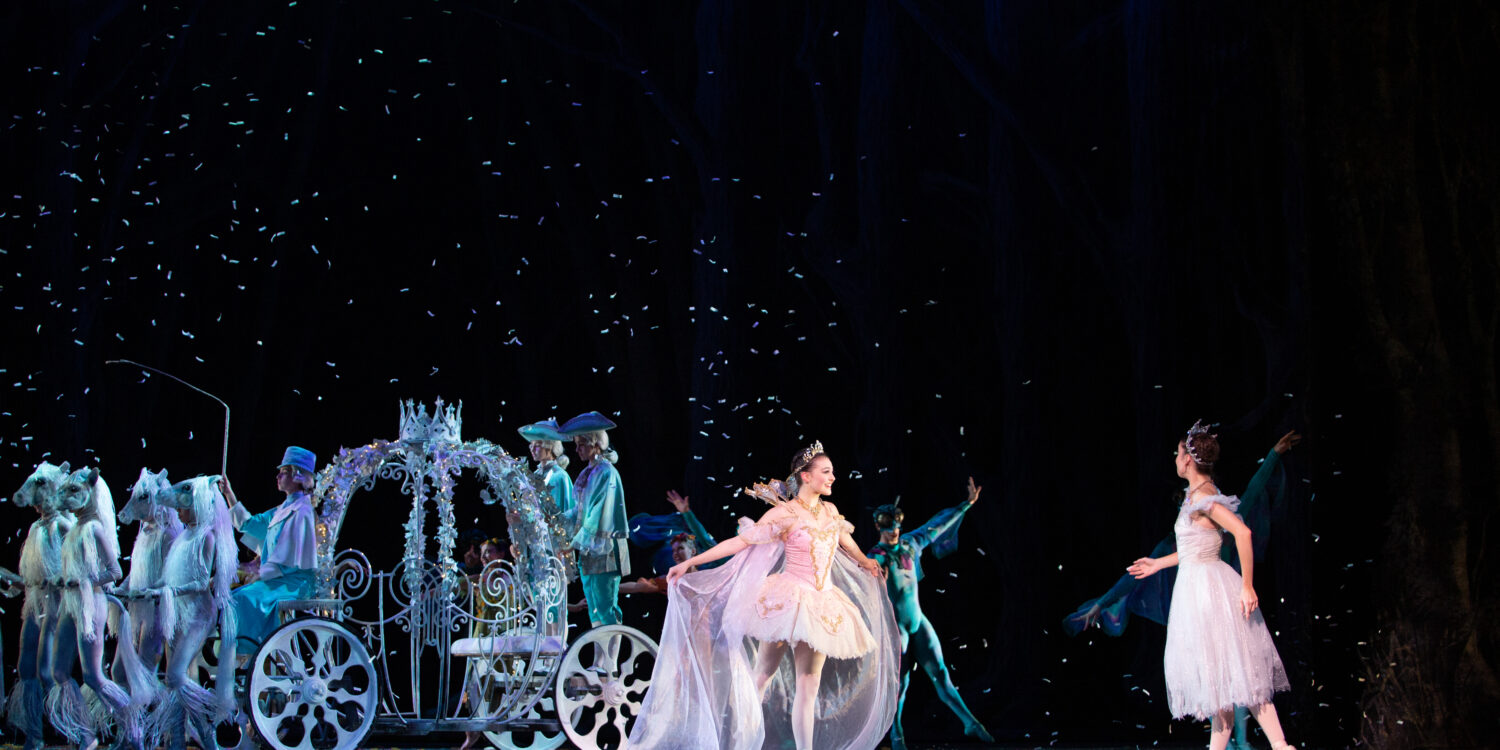 Philadelphia Ballet Artistic director Angel Corella is packing company’s 2022-23 season with classic story ballets starting with “Cinderella” this month and upcoming productions of “The Sleeping Beauty,” “Copellia,” and of course that perennial family favorite production of George Balanchine’s “Nutcracker” in an extended run in December. For contemporary ballet fans there is a program of modern classics by Balanchine that includes “Agon,” “Who Cares?? and a ‘New Works’ program with ballets premieres by Juliano Nunes, Andornis Foniadakis and Hope Boykin.

The Academy of Music in Philadelphia was all but full for Philadelphia Ballet’s 2022-23 season opener Cinderella, still enchanting kids of all ages who can’t resist the enduring fairy story of a servant girl marrying a prince and those cruel stepsisters or a fairy godmother who turns a pumpkin into a silver carriage, not to mention transforming Cinderella’s dirty servant rags into a bejeweled ballgown tutu.

Ben Stevenson’s 1970 version of Cinderella, modeled after Frederic Ashton’s lavish Royal Ballet adaptation has plenty of delights with its storybook visuals looking all the lusher in the gilded opera house environs of the Academy of Music.

Equally captivating is Serge Prokofiev’s entrancing ballet score that is cinematic in its narrative power. From emotional dramatic strings to oompah music hall comedy to score that ignite the vaudevillian comedy as stepsisters get ready for the Royal Ball where the Prince is searching for his true love to be his bride. Meanwhile, they have plenty of time to taunt and bully Cinderella.
The first act pantomime and character dancing performed with flair; standouts include- Jack Sprance’s Dancing-master comedic turn as he attempts to teach Cinderella’s stepsisters a simple waltz but is more intrigued by Cinderella’s perfect stillness in 5th position pointe in her raggy dress off in the corner.

Yavol Cohen and Russell Drucker are the Ugly Stepsisters bringing a dirty laundry list of cliche travesti girly camp as they attempt to turn out, jete, entrechats or flirt with the Prince.
When an old crone seeks shelter from the forest, Cinderella takes her in, warms her by the fireplace and give her bread. Meanwhile, she dreams of going to the ball herself and later that night the old woman makes it happen. In a sprinkle of dust, she reveals herself as the Fairy Godmother, flawlessly danced by Principal Dayesi Torriente, who escorts Cinderella to the magical world of the ball, but warns that she must return before midnight, or the spell will be broken.

the full Corp de ballet enters for the Palace ball, but Stevenson’s choreography is particularly static in the ball scene. The comic vamps by the Stepsisters runs out of steam and the corps de ballet court dances are little more than pageantry, with a lot of posey unison phrases and little footwork.
Fortunately, first soloist Ashton Roxander rescues these scenes in a captivating, technically fiery performance as the Prince’s court Jester. Roxander’s steely pirouettes, breezy tour en l’air, lightning jetes, and witty gestures as he spins in the air.

As he has proven many times Sterling Baca is a natural in Princely roles and he brings a strong characterization to his Prince. Baca and Baca had beautiful storybook moments in this performance, but the central love pas deux was wound too tight as the midnight clock ticked. and their chemistry looked a bit strained at key moments.

Prokofiev was at the mercy of Stalin’s regime when he wrote this ballet score in the 40s. After he started it he was ordered to compose a full opera based on Tolstoy’s ‘War and Peace.’ He was also had scored Russian films ‘Alexander Nevsky’ and Ivan the Terrible. All to be approved, or banned, by Stalin’s musical censorship committee that scoured scores for any hint of ‘decadent’ expressionism or western ideas.

Prokofiev wrote later that he thought of Cinderella as a real person with full emotions, not a character in a fable. Prokofiev used the story’s plot of a downtrodden servant girl to express universal messages of hope to the hearts of the Russian people living under tyranny. More than one subversive message in that grim fairy tale still, no?

La Emi at the Benitez Cabaret

Flamenco is haven for strong women. Men can flaunt their machismo through loud and lightning-fast footwork, pirouettes and posing, but...
Dance