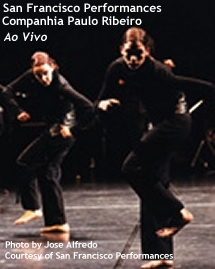 The prospect of seeing a modern dance company from Portugal is like opening a gift from a distant relative. What will it contain? Portugal lies outside the mainstream of European culture. Other than Great Britain, which shares a strong kinship with the U.S., Germany and France are the most visible exponents of modern dance form. Merce Cunningham has been the basis for much of French modern dance; the Germans have their own expressionist heritage. Spain and Belgium have been drawing notice. But Portugal is largely unknown.

The appearance of the Companhia Paulo Ribeiro, performing a one-hour work entitled Ao Vivo (Alive) provides an initial glimpse, and a pleasant one, too. The company of seven dancers (four women, three men) is touring with three jazz musicians. Pianist M�rio Laginha and vocalist Maria Jo�o, who are also responsible for the musical compositions, are augmented by Helge Norbakken on percussion. Jo�o was the most interesting performer of the evening, often moving among the dancers as she sang. She employs a wide range of sounds and voices, some of which sound northern African in their almost nasal wail. She is a lively presence, with moves of her own and an engaging smile. She enjoys what she does and the feeling is infectious. The music has an international sound in that it does not seem specific to any culture, although they did include a tango, sung in Spanish.

Choreographer Ribeiro, who is not one of the performers, has created a dance that is about individuality and display. He favors steps and gestures that happen on the beat and that correspond to the musical notes. He keeps his dancers working in isolation most of the time. Only in two sequences (notably the tango, which had three couples dancing) do the dancers relate to one another. The dancers are all clad in the same black outfits. This neutrality of appearance was matched by an absence of personality. The dancers often repeated the same move in unison. Ribeiro has a satiric edge that he should indulge more frequently.

In a sequence of solo turns, one woman’s solo involved elaborate and rapid hand gestures. Was this a reference to the fairy of song in Sleeping Beauty? In another sequence, a woman strode down to the edge of the stage, her eyes clearly communicating with "someone" in the audience. One of the men tried repeatedly to interrupt her, only to be brushed away. This rejected suitor did some capoeira-like moves on his hands in a solo that followed shortly thereafter. Was this an expression of his frustration?

Had the program been any longer, it would have become boring. The brief length suited the limited material. At least there were no overt and ponderous pretensions.