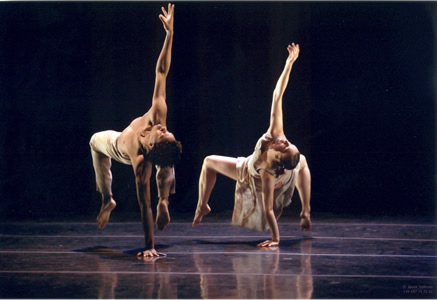 A Dance at the Music Center Production

Standing ovations have become overworked clichés in Los Angeles. Is the cast still breathing? Leap to your feet, clap like crazy, and please will someone yell bravo or brava a few times. On the other hand, at the conclusion of the Compañía Nacional de Danza 2 (CND2) to remain in your seat politely applauding would be unforgivable.

CND2 is the “junior” company of Spain’s leading dance troupe. It was founded nine years ago by the noted dance director and choreographer, Nacho Duato, for the training and encouragement of young dancers. CND2 is the farm team, so to speak, of the Spanish national company. Dancers are from 17 to 21 years old. Fear not, this is hardly a handicap! All that gives a hint of their youth is a seemingly bottomless well of energy and agility. Impeccably trained, the troupe of fourteen perform with synchronized and controlled abandon. Nothing is left to chance yet it all comes across as spontaneous, perhaps the consequence of co-director Tony Fabre’s instructing the dancers to dance to the music, not count, wherever possible.

Choreographer Nacho Duato is Artistic Director of both the senior and junior troupes. The program is composed of three of his pieces, Rassemblement (1990) inspired by the music and Voodoo traditions of Haiti; Remansos(ABT 1997, revised 2006) choreographed to music by Enrique Granados and inspired by the poet Federico Garcia Lorca; and Gnawa (premiered by the Hubbard Street Dance Company 2005) incorporating Spanish and North African sounds, Mediterranean sensuality and the spirit of the Gnawa of Morocco who are the descendents of Sub-Saharan slaves. Though all three pieces are clearly choreographed by the same person the variety is considerable.

The influences of classical ballet, and classic moderns such as Martha Graham, are strongly felt, but the youthful dancers also assume novel, surprising, and seemingly impossible positions as easily as if they were cavorting on a lawn somewhere. The stage costumes are classic modern, leotards, tights, and loose but revealing and stretchy dresses; the stage sets extremely simple; but the lighting deserves special mention. In Remansos Nicolas Fischtel and Brad Fields achieved a highly original effect that can only be described as creating animated Man Ray style solarization with the dancing figures.

The only question is why have we in the United States had to wait to see them? Their few appearances, including several at Jacob’s Pillow, have met with rave reviews. But what is not to like? Beautiful and remarkable bodies, wonderful technique, innovative choreography built on a strong classical basis … it is hard to ask for more. The series, Dance at the Music Center, should be applauded for providing a major venue for this innovative company. Americans will have another opportunity to see CND2 at BAM this Fall.