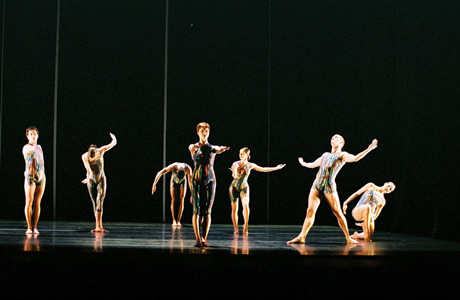 Merce Cunningham was the perfect person to jump on the IPOD bandwagon. Now his dance company must travel from engagment to engagement with dancers, sets, costumes and a small truckload of miniature music players with tangly cords and earphones, all primed with the same music. His new piece, eyeSpace (2007), offered audience-members the chance to borrow an IPOD Shuffle pre-loaded with the piece’s musical selections (by Mikel Rouse). With any other choreographer, you would worry about synchronizing music with movement– imagine being a second or two off for an entire Mark Morris dance– that would be maddening. In the case of Cunningham’s style of dance, however, where the “music” is as often a sound effect, some ear-shattering industrial buzz or screech or a toilet flushing, the randomness must have fit the movement in a perfect way.

I say ‘must have’, because the performance of eyeSpace I attended during the second night of the company’s engagement at Stanford University, January 26, was a different version of the piece–not only sans IPOD’s, but with a totally different soundscore (by Annea Lockwood) an extra 20 minutes, and different décor and costumes. And so it goes.

That’s the thing about Cunningham’s oeuvre. He’s famous for his use of the I Ching and chance in determining choreographic outcomes. He’s always been one to arrange and rearrange his dances. He is equally famous for being out-there musically, and for choosing out-there collaborators, like experimental composer and life-partner John Cage, the rock band Radiohead, video artist Charles Atlas and scenic designer/painter Robert Rauschenberg. One is never quite sure what kind of aural or visual edges to expect, but each dance creates its own ambience, a little Cunningham-world that looks like nothing else.

The movement vocabulary is familiar, odd but consistent, an upright, manipulated body that twists and swings, hops and balances—often at the same time. The dancers who do Cunningham movement well are like entire circus-acts on one body. There is a balletic line juxtaposed with an almost-robotic way of moving, everything is cold and strange and yet oddly comforting in its consistence and virtuosity. The long-legged dancers almost always wear skin-tight unitards and come with beautiful feet and a genius for complex articulation and movement memory. Beyond that, you can start to get attached to a haircut or set of arms. No matter how abstract Cunningham tries to make things, these are still people dancing together—it is impossible to abstract that.

I attended the recent concert at Stanford with an ex-dancer from New York who has always found Cunningham’s work pretentious and maddeningly esoteric. My friend made his living with and much preferred the moderns of the Graham period, where men were men and women were tortured souls (and usually the choreographers). During eyeSpace, he sank down in his chair, getting more and more worn-down by the usual onslaught of complex and impossible-looking duets and trios—dance totally without punctuation or musical expressionism, sans characterizations or stories. It is true. That’s Cunningham. That’s what he does. Same as always.

Surprisingly, however, the second piece on the bill, BIPED (1999), which featured motion-capture animation by Paul Kaiser and Shelley Eshkar, and music by Gavin Bryars, made my companion sit up again and even smile.

Where Cunningham’s pieces can frequently bounce back at you in their impenetrable abstraction, BIPED seemed more human. The music, which was loosely melodic, came with warm chords of synthesizer honey and nothing at all ear-shattering. This musical bathwater allowed the roboticism to give way into something easier. In particular, the arms of the dancers were smoother here, less jagged. Perhaps it was my imagination. It could have been the lovely costumes by Suzanne Gallo or lighting by Aaron Copp. Still, walking away from a Cunningham concert with a warm fuzzy feeling is new.