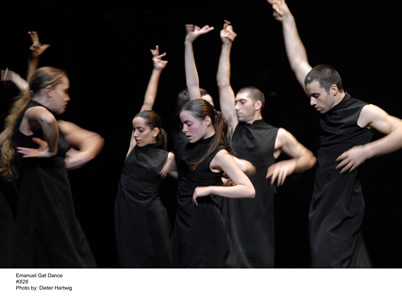 baggage, such as Mozart’s Requiem, which accompanies "K626". He doesn’t

synchronize the start of the movement with the music, instead

beginning in silence, and inserting gaps between movements. Awaiting

the onset of the music adds some anticipatory tension, and though the

dance gathers richness when the music plays, it is fascinating enough

on its own merits so that the music feels less a necessity than a bonus.

Gat does not follow a narrative, and yet through groupings in unison

or opposition, varied dynamics, and simple interactions, he creates

great drama. His movement is rooted and gravity-bound, often moving

through deep, wide squats. The upper body ripples from the pelvis to

the crown; shoulders roil as the arms cling to the body or rise,

crooked at the elbow, fingers pointing askance. Big movements are

often sweeping lateral steps, and when leaps finally come, their

The group of five women and three men frequently moves en masse, in a

flock. Like birds, they relate more by instinct, not by verbal

communication. One of Gat’s most powerful motifs is when a dancer

slowly and gently shoulders by another to move forward in a crowd,

and then reverses into sublimation. It is a subtle, amazingly complex

maneuver that can summon the most delicate of human interactions–

The choreography is neither overtly masculine or feminine, and yet at

times can feel extremely like one or the other, no matter which

gender the dancer, who all wear elegant long black tunics. Mostly, it

is highly sensitive and sensual, with as much care applied to the

impetus or the final settling of energy as the route itself. This is,

as well, a tribute to the skilled dancers, who convey the import of

players in the mass without taking on the acting chores.

Some sections are more familiarly gestural–dancers manipulate their

faces with their hands; one woman carries another to the point of

fatigue. But more often, as Mozart’s music can do, the dance uses

allude to an exaltation beyond word or mime. The feeling of sanctuary

is heightened by the set, the stage’s sides cloaked off with black

drops, and the amber and moon-like lighting, also designed by the