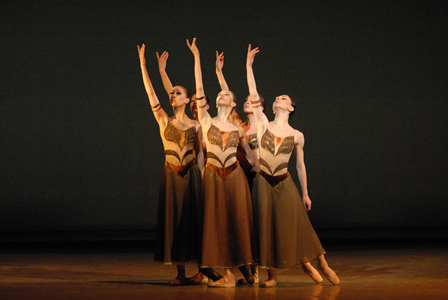 The Russians long have claimed sovereignty in the realm of the ballet. Even before Diaghilev, Nijinsky, Pavlova and Fokine there was the music of Tchaikovsky and the choreography of Marius Petipa. The whole thing has been going on for a long time and two companies soon emerged as the Soviet giants: the Bolshoi in Moscow and the Kirov of St. Petersburg. But stuff (like glasnost and the dissolution of empire) happens and today, what is Soviet is not necessarily Russian. Sunny, southern Georgia, for example, is much closer to Turkey and Iran than to Moscow and St. Petersburg. And now the Georgians are developing a dance company that just might give their northern cousins a run for the ticket money.

In 2004, under the newly appointed leadership of famed Bolshoi prima ballerina and frequent American Ballet Theater principal dancer Nina Ananiashvili, the State Ballet of Georgia was given three years and a big budget by the new Georgian president to create a world-class ballet troupe from the threadbare remnants of years of repression and poverty. Time’s up and it seems, as has been said elsewhere, “mission accomplished.” The State Ballet of Georgia kicked off its first U.S. tour (although it did play the Jacob’s Pillow Festival in Massachusetts last year) on Feb. 14 in Berkeley and it was quite a lovely Valentine.

“Chaconne,” set to music of Gluck, well played by the Berkeley Symphony under Robert Coles, began with a corps of beautiful longhaired, long-legged girls circling and boureeing across the stage looking indeed like the Blessed Spirits of the score. Then Anna Muradeli and Vasil Akhmeteli enter. They do not look at each other at first but their longing is almost palpable, further suggesting the “Orfeo” myth. But soon we leave the realm of the dead for a lively court scene. Ensemble groupings, a trio and several duets lead to a grand finale for the entire contingent of dancers.

Ananiashvili may be the superstar but she is not the only leading light in the Georgian firmament. Balanchine’s “Duo Concertant,” a spare and occasionally passionate love duet set to Stravinsky, showcased the considerable talents of Nino Gogua and Lasha Khozashvili, dancing beautifully to Franklyn D’Antonio’s virtuoso violin, accompanied by pianist John Parr.

Ratmansky’s setting of George Bizet’s “Chromatic Variations” is full of Sturm und Drang and not much else. The Bolshoi director’s choreography, set on three couples, offers nothing new to the dance vocabulary. Two pair court and flirt nicely enough until an outsider (the powerful Vasil Akhmeteli) enters, enticing the women and enraging the men. Then a third woman (Ananiashvili herself) shows up and the outsider no longer is alone. All the men are smitten but she goes to the big guy in the purple shirt and everybody dances. It would be nice to say that one was overwhelmed by the brilliance of the famed superstar but this was an ensemble piece, with no one doing anything much differently than anyone else. For the bravura stuff, patrons would have to wait for the Feb. 16 “Giselle,” when Ananiashvili takes the title role, again partnered by Akhmeteli.

“Sagalobeli,” although drawing on regional themes, is not your typical “folkloric” ballet. What it is is an interesting, energetic crowd pleaser for a large ensemble that, after this U.S. premiere, may well make its way into the international repertoire. The men, clad vaguely like gladiators, are particularly strong. The women bouree to a balalaika tune, belly dance en pointe and the entire ensemble twirls and weaves in mesmerizing patterns. Possokhov’s choreography is fresh and engaging, combining folk idioms with modern and classical dance to create something entirely new. It sent a happy audience out into the Valentine’s night with a strong sense of “Georgia on my Mind.”