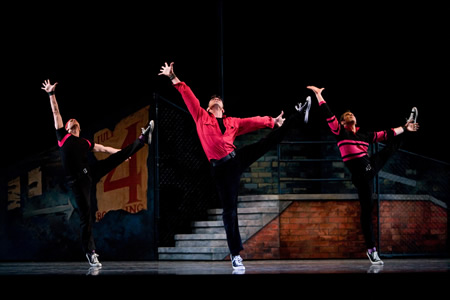 Two programs which paid their respects to the New York City Ballet in different ways, and a dangling semaphore, an android frenzy by Wayne MCGregor (repeated from last season) “Eden, Eden”, finished off the regular season of the San Francisco Ballet in its 75th year. The three remaining programs will feature visiting companies stepping onto the stage in honor of their host, and a New Works Festival, which will offer the home team in ten brand new, commissioned works.

Helgi Tomasson, director of the San Francisco Ballet, was one of the first company directors to commission Christopher Wheeldon, a British dancer in the New York City Ballet who was beginning to build a name for himself as a choreographer. Wheeldon later succeeded Jerome Robbins as the #2 choreographer at City Ballet. In the same vein, Tomasson, a few years earlier, gave Mark Morris carte blanche to create new pieces on the company, before Morris had assumed his role of Grand Poobah on the classical stages of the world. Tomasson has a good eye, he keeps programs varied, and he throws in spice to balance out sugar, and edginess to counter tradition. As a choreographer himself, he may never quite have the strange certainty it takes to create a work of genius, but he clearly recognizes it in others. His own dances are serviceable, interesting, often visually sumptuous, but never sublime. When a young guy like Christopher Wheeldon comes along, however, and puts two bodies together with music and somehow takes your breath away, the difference has something to do with youth, adventure and lack of self-counsciousness. To Tomasson’s credit, as an artistic director, he sublimates, lets his breath be taken away by other choreographers, and then whips out a contract. The San Francisco Ballet has Helgi to celebrate as well as its own illustrious history. Tomasson’s eye keeps things moving forward.

“West Side Story Suite” premiered at New York City Ballet in 1995, around the time Robbins had his own Broadway show (“Jerome Robbins’ Broadway”). However, the original “West Side Story” premiered in 1957, half a century ago. “Fancy Free” takes place even earlier, in a kinder, gentler Gotham, although the 1944 dance was defiant in its Americana, glared-out at the white glove and pearl-wearing ladies with a provocative theme—New York. In this early Sex in the City, WWII sailors-on-leave hang-out at a bar, looking for love. It had to have been seen as a rampant threat to the purity of the classical repertoire. Times have changed. Here, the stripped-down character dancing comes with enough athletic hi-jinks and multiple pirouettes-as-sport (which is what pirouettes really are, anyway) to remind you that this really is a dance, and that the sailors know a thing or two about dancing. The jazzy score by Bernstein is almost Coplandesque compared with the music produced later for West Side Story.

“In the Night”, a presumably romantic piece, with Chopin piano score and three couples taking turns illustrating things, has a strangely violent subtext . It is as if Robbins had a little hatred for the idea of romance, ,preferred things rougher. The couples who make love to individual nocturnes seem to be a lot edgier than the music, to the point that the sweetness is not only shaken-up by the choreography, but disturbed. This is schizo-romantic, these are relationships with issues.

My favorite moment in the “West Side Story Suite” was the ending—there is a sudden change of backdrops, and a grungy, Lower East Side set is replaced by a golden field somewhere in Kansas, just as all the dancers walk back out, Sharks and Jets together, to sing “Somewhere”. It runs the risk of being hokey, but to me, just the sight of all those kids (it was corps-time, with additional recruits from the school—this cast was huge and young) standing still, opening their mouths and singing, was surprisingly moving. Here are these highly trained dancers, who never open their mouths , ordinarily, having a moment . I rested in my cloud of good feelings until the lobby, where an acquaintence complained that the ending gave her the creeps, reminded her of some religious cult recruitment or a Jesus allegory. Oh well.

I loved watching Anita, played by Katita Waldo, cutting up in her high heels and jazz skirt. Oh, right, and she sang. Well, this was the Opera House, and Waldo’s voice was American Idol thin, even amplified. But she did her darndest. Waddayagunna do? Fortunately they brought in some ringers, 4 singers kept mostly offstage doing all the big ballads. Dancewise, it was a guy piece, and the San Francisco boys were strong, even with B-team shakey unisons on the night I attended. There was plenty of familiar imagery, the snapping pack in “Cool”, the reaching-for-the-skies dancing-thug step with the denim-busting extended second leg, over and over, looking particularly beautiful and not edgy because these were ballet dancers playing Broadway dancers playing thugs. Who needs two hours of silly narrative? In 30 minutes, you can enjoy all the energy of a youthful cast of 42 and full orchestra dancing up a storm, and belting out great, familiar Bernstein. No fuss, no muss.

What I missed was the editing. Seeing all this nostalgia theatricalized, opened up, filling the vastness of the Opera House stage, reminded me that what I missed was watching the dance on the tiny black and white TV screen of my childhood. Filmic editing, or was it the way the way the tiny black and white TV screen I sat in front of as a kid, framed something unique and powerful? To me, the image of the jeans-and-sneaker dancing guys belongs in black and white, scratchy, with snow. These were images that changed my life.

On Program 5, Tomasson’s premiere” “On a Theme of Paganini” was up against two works by Christopher Wheeldon (not the best idea for Helgi). Wheeldon’s 2005 “Pas de Deux from After the Rain” to Arvo Pärt music for violin and piano is new for San Francisco, and one of the most jewel-like, sensual duets in memory. The music, which was all stillness, quiet and meditation, offered an opportunity for the kind of grounded silkiness at which Wheeldon excels. In contrast, “”Carousel (A Dance)” is yet another Broadway redo, with a medley of tunes from the darkest of Rogers and Hammerstein musicals. Here, circles and waltzing, a couple in love, and a bittersweet outcome look totally different from the not entirely dissimilar “West Side Story” (plotwise, anyway). Musically speaking, Hammerstein and Bernstein were a generation apart, and it is slightly ironic to see a much younger choreographer tackle the older style music and setting. A stripped down stage and a carousel with ballerina horses are enough for Wheeldon to create a clear sense of the romance and tension of the musical. If the choreography is more stipped-down and Broadway, perhaps its time for a new show to take on Wheeldon’s services and see how he really follows in Jerome Robbins’ footsteps.

“Paganini” was a full company work, a chance for Tomasson to play around with groups of 18 corps dancers and 5 soloists. The music, by Rachmaninov, only became familiar in once actual theme arrived, stated well into the dance. Suddenly, Yuan Yuan Tan and Tiit Helimets became the romantic centerpiece of a work that had not yet featured them together. It was as if the music forced the choregrapher to bend his own idea of things and get romantic. The rest was an exercise in Balanchinian movement in groups, an exploration of the briskly moving score without creating anything particularly fresh.

“Eden/Eden”, a repeat from 2007, is the quirky ballet of the season (and last season), a modernistic android dance for nine by Wayne McGregor (originally choreographed for the Stuttgart Ballet ion 2005). Set to Steve Reich’s spoken libretto/musical score for the third act of a 2002 filmic opera, “Three Tales” which dealt with cloning,”Eden” offers bald, skin-colored-tights-wearing unisex dancers exploring human contact, technology, and evolution. What could seem dismal and oppressive is theatrically countered by the athletic choreography, which the San Francisco dancers take to like ecstacy.