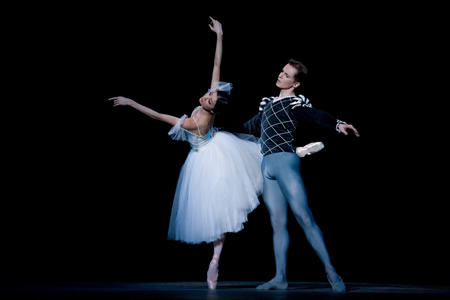 Production and Choreography by Helgi Tomasson

Age cannot wither, Shakespeare famously said of Cleopatra but, anachronism aside, he might as well have been talking about Giselle. Few women of 166 can get a date, let alone a bunch of them in the same week. The State Ballet of Georgia, with its superstar director/ballerina Nina Ananiashvili in the title role was doing the work in Berkeley while, just across the Bay, San Francisco Ballet opened a nine-performance run of the Helgi Tomasson version, based on — but not limited to — the original choreography of Marius Petipa, Jules Perrot and Jean Coralli. One would have liked to have seen both but one is not twins.

So, what is the perennial appeal of this repertoire staple? Surely it isn?t he story__at of a simple peasant girl who is deceived by the nobleman she loves and comes back to haunt him in Act Two. And definitely not the music. Adolphe Adam?s score is tuneful but relatively undistinguished, even for its time. But, somehow, when you put it all together, the hackneyed story, the mediocre music and the hodgepodge choreography (more than three guys worked on the original and there has been multiple tinkering over the years), ?Giselle? achieves a kind of greatness — when it is done well. And San Francisco does it very well indeed.

The curtain rises on a fairy tale village square, rustic houses on either side of the stage and a castle looming far off in the distance (Mikael Melbye, designer). Cheerful peasants dance and it is all too bucolic for words. But appearances are deceptive. Hilarion, a huntsman (David Arce) leaves a brace of birds at the door of his beloved, unaware that she has her own eye on a mysterious stranger. The huntsman?s jealousy is soon awakened, however, as the stranger, Count Albrecht, a nobleman in disguise (Ruben Martin) appears to court the lady.

Vanessa Zahorian makes a lovely Giselle, convincingly shy as the innocent maiden and wonderfully, operatically berserk after she learns her lover?s true identity. Zahorian delivers one of the best mad scenes witnessed in a lifetime of ?Giselles.? You see, Albrecht already is betrothed to a lady of the court (Erin McNulty) and, after the

vengeful huntsman unmasks him and the chips are down, he chooses the wrong girl. Now, there always is some debate over whether Giselle dies of a broken heart or an actual heart attack. She has a weak ticker, as her mother (Katita Waldo) keeps warning her, and shouldn?t be doing all this dancing at all. In some productions, after grabbing Albrecht?s sword, she stabs herself. But Zahorian leaves us no doubt as to the cause of death. The girl simply has lost her mind and dies of love.

It is not the mime-heavy first act, distinguished only by the aforementioned mad scene and a sprightly pas de cinq for the peasants that brings fans flocking to this piece year after year. It is the beautiful second act, with its ghosts of betrayed maidens pledged to revenge themselves on all men who cross their paths by dancing them to death. Tonight they will have two potential victims, Hilarion and Albrecht, both bearing bouquets to place on the grave of Giselle.

Ominous chords in the orchestra and the solemn toll of a bell herald a very different scene than the one that preceded it. The curtain rises on a thorny wood, covered in mist. The thicket of trees slowly parts to reveal a single grave. In?dances Myrtha (Elana Altman), the white-clad Queen of the Wilis, cold, imperious and more than a little spooky. She soon is followed by a stageful of ethereal veiled spirits, the true treasure of

any ?Giselle? and the reason it is beloved as the epitome of romantic ballet. And the perfectly disciplined San Francisco female corps does not disappoint.

If Martin was a rather cool and mechanical lover in Act One, once the perpetual smile is wiped off his face he warms up a lot as a grief and remorse-stricken swain. He and the shade of his newly-dead love dance a beautiful pas de deux, during which Giselle pleads for the Queen?s mercy in sparing his life. Freed of her earthly ailments, Zahorian?s Giselle is all light and quicksilver here and, eventually, she gets her wish. After a dazzling display of entrechats, no doubt designed to take him out as other men before him, Albrecht is literally saved by the bell, heralding the dawn when the Wilis lose their power. Myrtha and the girls bouree off into the bushes, Giselle sinks back into her grave and Albrecht is left alone to mourn her loss.