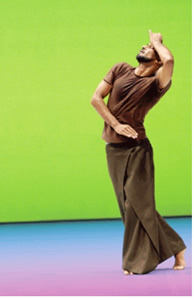 You don’t have to be George Bush to realize that the fear factor has ratcheted up alarmingly since 9/11. A multi-cultural, multi-ethnic , multi-religious world now seems locked in perpetual face-off. “ The other” isn’t just a cute existential conceit but a living breathing fact of life. This social condition, or malaise, if you will, is at the heart of choreographer-dancers Akram Khan, and Sidi Labri Cherkaoui’s 75 minute duet, zero degrees (2005), which they performed at NY City Center in midtown Manhattan as part of Akram Khan Company’s 2 program – the other evening-long piece being bahok – Friday 24 and Sunday 27th April – I caught the latter.

Beginning a piece quietly is always a challenge – people seem to like being hit over the head immediately – and Khan and Cherkaoui began theirs by sitting at the lip of center stage and telling the same real life story of how Khan and his cousin had their passports confiscated when boarding a train from India to Bangladesh. “ If my passport disappears where is my identity? “ they ask., and then their movements answer this and other questions about their single and dual identities, which are mirrored, and literally wrestled with in sculptor Anthony Gormley ‘s replicas of them onstage. Passages drawn from the Kathak dance of South India, yoga, modern dance, and many other sources come and go, in the big rectangular blue greyish space of the stage. Khan , his back to the audience, pushes his hand against an invisible wall, and the piece takes off – physical, metaphysical, visceral – subtly underlined and extended by Nitin Sawhney’s score for vocalist siging what sounds like a raga ( itals , violinst, cellist, and percussionist , on tabla, finger cymbals, and drums, which four expert musicians Laura Anstec, Coordt Linke, Faheen Mazhar, Alies Sluiter played live behind the back “wall “ of the set, which at one point showed that they were really sitting behind a scrim, this “gesture” being perhaps a comment on the elusive nature of our identities in our very troubled time.

Most artists are ambitious and Khan and Cherkaoui certainly are, but what held the big and very attentive audience here was the depth, delicacy and power of their message, zero degrees being, in Khan’s words, “ the reference point where everything begins… “ Like Ground Zero, now manicured clean, and ready for fancy condos on its south side, or as my friend Manfred would say “ creation can only come about through destruction”, as in Shiva’s cosmic dance of renewal. And to think that I hadn’t even heard of Khan and his company until I did a search for a composer friend of mine, and ended up on WNYC’s page, and saw Khan’s beautiful face in an ad for his group, and then went to his site, http://www.akramkhancompany.net/, which has a clip of him performing a remarkably fluid and evocative solo dance for the camera. Which just goes to show you what happens when you “answer” an ad, and discover something you hadn’t known even existed. And so there’s light, even in our dark, forbidding time, where all sit waiting.