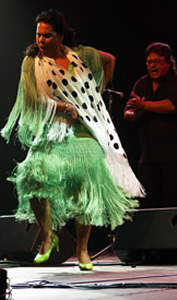 When Madrileños are asked about music in the subway, they’ll mention Native South Americans playing pan pipes or Romanian gypsies with accordions strapped to their backs, and some might even remember the blonde Russian lady dressed to the nines and singing romantic songs from her homeland. But thanks to collaboration between the Madrid Metro and the Autonomous Community of Madrid’s Transportation and Infrastructure Office, flamenco is now linked to locals’ memory of the Madrid underground.

Cumbre Flamenca (September 17th-21st) is a festival celebrated yearly in one of the city’s larger metro stations. In the 2007 edition, hosted by the newly renovated Chamartín “macro station,” lauded flamenco dancers and musicians, such as El Güto, José Mercé and Pansequito graced the stage erected under a large tent in the station’s vestibule, seating 1,200 audience members who had only to pay a ride on the metro to catch the nightly concerts.

Although cantaor (flamenco singer) José Mercé drew the largest turnout and flamenco-pop performer Antonio Carmona brought a younger and more commercially-oriented audience into the Cumbre Flamenca fold, it was the women of this year’s event that gave the most surprising and enriching performances.

Legendary flamenco songstress Carmen Linares gave a top-notch performance, beginning her set with a number of popular songs collected by Spanish writer/poet Federico Garcia Lorca during the 1930’s, which included the infamous “El café de Chinitas” and “Los Peregrinitos.” Although these songs are well known to followers of flamenco or Andalusian culture, they are rarely heard sung live, probably because cantaores are interested in singing newer, less traditional songs. It was rather refreshing to hear these old favorites again, especially from a woman who has played a critical role in elevating flamenco from a folkloric medium of the southernmost Spanish province to a nationally valued and studied art form.

The second half of Linares’ show was the purist flamenco for which she is so widely known and acclaimed. However, after a nearly 40 year-long career and at age 56, in recent concerts it has become evident that Linares’ voice is a little worse for wear, often stretching to breaking point to maintain the sustained warbling that characterize flamenco song. And while a few creaks and cracks snuck into songs during a couple of Madrid performances this past year, her Cumbre Flamenca presentation was impeccable, making it one of her strongest performances in… dare one say it… years.

The all out star of this year’s Cumbre was, without a doubt, Aurora Vargas. For what can only be described as a flamenco spectacle, one need look no further than Vargas, who not only sings with unmatched passion and expressivity, but throws in a little dancing to boot. As a gypsy from Seville, Vargas’ style is entirely different from Linares’, less composed and rigid, her songs and singing carry a more traditional and celebratory feel. By the end of her performance, Vargas had thrown aside her chair, pushed the microphone forward, began singing without amplification, giving ample proof of the potency of her voice, and dancing fervently through the choruses, spinning and stomping and jumping, bringing the audience to its feet to cheer her on.

Cumbre Flamenca, now in its third year, provided five excellent performances, of which the women made the strongest impression on both the viewing public and the media. With each year the audience grows and artists of greater renown participate. This positive trend leaves Madrid’s most devout flamenco fans with great expectations for Cumbre Flamenca 2008.