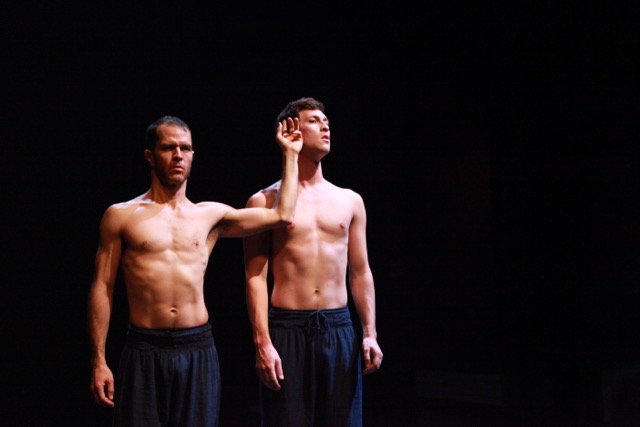 Whiz-bang choreographer and dancer James Graham just curated his 6th season of “Dance Lovers… duets by couples, crushes, and comrades.” It is his annual Valentine offering that allows husbands and wives, husbands and husbands, wives and wives, and just plane old fashion “crushes” and friends to have a chance to perform together—a scheduling feat that can often take years to organize. The duets are testaments to their relationships and incorporate various styles of dance ranging from modern to drag, the use of words, improvisation, full-up “Gaga” dance method and everyday modern. Winner of the “IZZIE Award” for Outstanding Achievement in Performance for an Individual (for an entire season), Graham started the evening premiering “Mouse Marrow” with comrade Galen Rogers. This stark physically intimate piece, with two solid shirtless dancers, was stoic and more inquisitive than sensual; a testing of boundaries, a search for one’s self–while getting to know another. Even when they called out each other’s name it sounded more of a question than an embrace, a testing rather than an invitation. When they did embrace, eventually taking turns in wrapping themselves around the torso of the other, they switched roles—the way relationships often do, trusting enough to allow themselves to be carried across the naked set.

By comparison, the voluptuous husbands–both in stature and romance–Rogelio Lopez and Andrew Merrell exuded operatic sensuality and excess in “Take The Letter To Juliet.” Lopez and Merrell are full-bodied and authentically flamboyant, ala Mark Morris in the old days–minus the slapstick. They danced curvaceously in layers of garments designed by Merrell tossing rose pedals and tearing up letters in this “end of a relationship” performance, in the most believable manor. They were delightful to watch, and the biggest surprise (no pun intended) of the program. Their neo-romanticism fashion—long sleeve plaid shirts, olive green sweaters, skirts, pants, and blouses—was perfectly accented by their naturally long hair. This styling beautifully matched the choreography and cello strings of the Brodsky Quartet. (Of course they had cello music…and Elvis Costello crooning!) Keith Johnson choreographed this dramatic 2009 piece and it was within his dance company that these two men first laid eyes on each other. (Toss more rose petals here!)

Husbands and wives abounded in both “untitled, with infinite divisibility of space and time (ii) (Arletta Anderson and Adam Smith) and “Deep and Crisp and Even” (Anna Long and Daniel Chenoweth.) Anderson and Smith’s performance was witty and playful based on the unintentional humor that haunts couples from knowing a person too well, that enduring humor that can turn to ammunition in a heartbeat. Rhythmically they stomped across the masking tape diagram the laid out across the stage, calling out to one another poetic phrases from opposite ends of the stage. “Deep and Crisp and Even” was smart and stylistically distilled, with Chicagoan dancer Anna Long successfully taking on everything from music editing, set design, makeup, to choreography. Long was powerfully mesmerizing; a skilled dancer with Gaga method training who was handsomely matched by hubby Chenoweth. Both were in white face, white boxers, with red stigmata dripping from their breastbone, reminiscent of costuming and design of Japan’s Sankai Juku Dance Theater.

The least realized of this solid evening of dance was “Dear Brother” by Rachel Laws and Jane Selna which came across like a final dance exam, gimmicked with stereo headsets and indulgent never-ending hugs. Even the innocence of these young dancers and the loudly played electronic rock failed to substantiate this touch-and-go experiment. By sharp contrast– and very much for ‘adults only’–was “courtSHIPSAILED,” a pornographic dance presented as “an exploration of past, present and future forms of engagement” by drag queen Grace Towers and his friend, Ismael Acosta. But before they began the audience was warned to overt their eyes, should the sexually explicit film projection offend. Still, no warning was made for the sexualized grunting of men going at it from the soundtrack, which included a gay man’s history of sex spots in the city during the late 70s early 80s. “courtSHIPSAILED” powerfully pushed boundaries even for San Franciscans, with both men dancing in briefs, t-shirts, and socks, as Towers’ displayed his bubble butt in some form of gyration as if longing to get something. “Dance Lovers” was better than chocolate and roses and worth seeing each year.