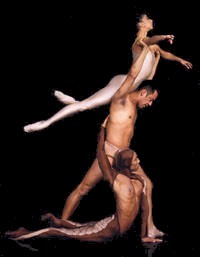 There are a lot of choices for dance audiences lately, but as far as I’m concerned, you can keep your fluttering swans and languishing sylphs, thank you. I prefer DTH’s sassy, jazzy "Return," choreographed by Robert Garland, as a curtain raiser any day. If you&#146;ve never seen funk en pointe, this 1999 creation, set to music by James Brown and Aretha Franklin (so hot you forget it&#146;s canned), is a real eye-opener. Garland uses classical ballet, jazz dance, break dancing, swing and a whole lot more in a fine fusion of a work that is as challenging as it is fun.

Headed by Andrea Long, a bundle of attitude in toe shoes, and the wonderful, muscular Donald Williams, the energetic ensemble had the audience at Zellerbach Hall in Berkeley jumping out of its seats from the first beat. Long and Williams sparked the opening section, "Mother Popcorn," with plenty of electricity. Williams had a new partner, Kellye A. Saunders, in "Baby, Baby, Baby," a pas de deux with soul. Long was featured again in the athletic "I Got the Feelin&#146; " partnered by Kevin Thomas and Ramon Thielen. Lenore Pavlakos and Kip Sturm performed the sinuous, sexy "Call Me," the slowest number in the set, and Williams was super-good in "Superbad," the upbeat finale. For all the funk and fun, this company is exceptionally disciplined, with impeccable technique.

Company founder Arthur Mitchell&#146;s "Manifestations" is an interesting take on Adam and Eve and that whole business with the apple. The dancing and choreography, especially for the Snake (Thielen), is first rate but the choice of the score by Primous Fountain III may have been a mistake. It is dense, difficult stuff, highly discordant, and tends to overpower the dance &#150; which is not what ballet music ought to do.

The set, rainbow-colored ribbons stretched diagonally across the stage, is intended to be evocative of the Garden but it doesn&#146;t really work. And, when the Snake is lowered from the flies on a rope of leaves (think Tree of Knowledge) it gets an unintentional laugh. This is truly unfortunate because there is nothing funny in this ballet. Adam (Sturm) expresses his loneliness at the outset, then gives painful birth to Eve (Long again, in a totally different mood). They explore one another and the Garden with delight &#150; and some fine dancing &#150; but once the Snake enters they are goners, in more than one sense.

As is often the case, the Snake has the best lines and Thielen slithers and stretches his way through them with panache. He is so fascinating to watch that Adam and Eve fade into the background until the powerful end, the closing image implying that violence, evil and trouble have now come into the world. Mitchell creates a wordless picture that stops the heart and takes the breath away.

"South African Suite," which Mitchell choreographed with Augustus Van Heerden and Laveen Naidu, is a sheer delight; a love song to that troubled country that accentuates the positive. With often-Celtic sounding music, performed by the Soweto String Quartet, its various sections have titles like "Enduring Spirit," "Blessing" and "Hope."

The "Warriors" segment, featuring Thielen and Mark Burns, shows the strutting, posturing warriors of old, rather than those fighting for justice in the torn townships of the apartheid struggle. The jazzy, upbeat pas de trois "Youth," which featured Paunika Jones, Kevin Thomas and Leslie Cardona, was exceptionally good and the joyous closing ensemble, by the entire company, ended the evening on the same upbeat joyous note on which it began.