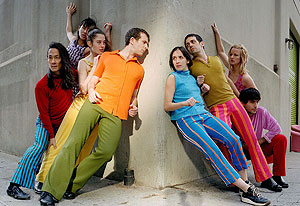 Doug Varone and Dancers, a New York-based modern dance group, features a momentum-based approach to movement that director Varone has used to illuminate music as varied as John Adams&#146; Fearful Symmetries and Prokofiev&#146;s Waltz Suite, Opus 110. Much less ballet-based than work by Mark Morris, the more prominent modern choreographer of the same generation, Varone has a distinctive and arresting voice. He creates kinesthetic patterns that explode with a an organic and rapturous essence.

There&#146;s nothing presentational, ironic or glib about this work; it takes the possibilities of the human body along with the ebbs and flows of momentum and equates that, abstractly, with emotion. The result is a very satisfying theatrical experience.

"Castles," a 2004 piece to the aforementioned Prokofiev Waltzes, seemed to illustrate the dangerous qualities inherent in the rhythms of the waltz, which originally seemed scandalous and provocative to audiences when the music and dance first appeared in Europe. Here, the tribe of barefoot dancers always seems to fly onto stage during the most rousing refrains, leaving the smaller, quieter parts to one or two dancers. Varone masterfully renders details through bodies in ways much more surprising and, again, organic, that those of Mr. Morris, who is the de facto standard-bearer for lyrical modern dance these days, but may not, apparently, deserve this crown. In fact, Mr. Varone takes the loosey-goosey qualities of Trisha Brown and early Twyla Tharp and shapes them into more clearly defined musical experiences. His dancing is of the music, but not, as Morris&#146; can sometimes look, enslaved by it.

"The Thing of the World" (2003) illustrates another major theme for the choreographer, homosexuality. A Brokeback Mountain-kind-of dance, this male duet, performed by Varone and the younger John Beasant III to a rhythmic original score by John Mackey, is a relentless, masochistic struggle for a couple who are, clearly, not comfortable with the lyrical softnesses of romanticism. Theirs is a brutal, guilty attraction. Varone approaches the role of the "boss" with a kind of jaunty repugnance. The "boy," Beasant mainly reacts to the brutalisms inflicted by his "partner." It is not a pretty picture.

"Rise" (1993), the curtain-opener, featured four couples in matching primary colors. Each presented themes which were later quite comprehensively varied. Varone managed to disturb the neatnesses of classical form by mixing colors, forming groups and disrupting old-fashioned order whenever possible. It is a very New York way to be. The music, by John Adams ("Fearful Symmetries") created dynamics which informed the proceedings without ever seeming to own them.