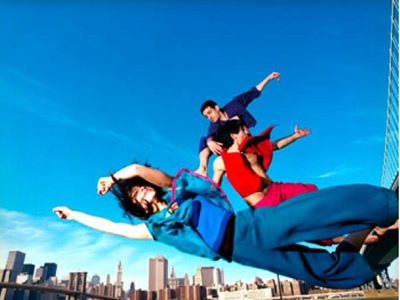 Despite often overwhelming, cyclonic, and even hypnotic combinations of movement (bodies and set pieces) and video projections, Doug Varone’s Dense Terrain, which had its US premiere at Brooklyn Academy of Music on Wednesday night, remains a fairly straightforward comment on human language: The opening projection was a close up of a person’s lips in quick verbal motion, although we hear no sound.

The physical movement is big. A single dancer fills the opening moment with large, sweeping kicks and beautifully extended arm gestures. Twelve silver chairs,evenly spaced through the Harvey Theater stage in four rows of three, created obstacles that the dancers would navigate around, emerging one, then two or more at a time. They run in, crash to the floor, then stand up quick, twisting to find themselves sitting inone of thechairs;or they would hop up onto all fours (hands and feet) and scuttle upstage or off to the side. Varone’s dancers move like particles of debris caught in wind currents;generally together but with enough autonomy to lead to different results, directions, intentions; fluctuating between propulsion and inertness. Formations of single file lines inevitably, dismissively dissolve as soon as they align. One also gets the sense that the dancers are learning the movement from each other; in some cases, learning how to move.

The work’s first clear representationarrivesin the video projections where we see the male dancer from the opening video segment obsessively–almost deliriously–scribbling indecipherable scrawl onto the white walls of a room. Then we hear his voice trying to formulate the writing; but it also is unintelligible gibberish (with the unfortunate exception of a few syllables that ring too close to words we know; "weed"and"baba"). Varone–credited withconception and direction ofthe video–presents us with the image of a human discovering his own language. There is a madness there, be it mystical or simply academic, the kind that keeps an scientist up for hours once he’s on to a solutionfor a long troubling problem.

There is ample interaction between the projections and the dancers to validate the rather pronounced use of the projections. It seems as if almost nothing is performed these days without video of some kind. Other artists would bewise to take a cue from Mr. Varone to understandhow a projection necessitates a certain compliancefrom live action. Moving images are nagging, even annoying in their desire to be observed. Allowing the dancers to huddle in a group, facing upstage to focus their attention on the projectionis a way of acknowledging the presence of the image. Then when a radiator appears attached to one of the set pieces–an exact replica of a radiator that was depicted in one of the projections–a wonderful depth of dimension is achieved. Same thing when, in one of the projections, a handful of mini silver chairs is tossed onto a table. Or also when the dancers themselves appear simultaneously on screen and stage.

What follows the introduction of the new language is a gradual institutionalizing of it among the dancers. A long, rectangular table is set in a rectangle of light with two of the chairs behind it:the quintessential image of institution. Wall pieces set on wheels enclose the table. The dancers, dressed casually in earth tone pants and tops,take turns sitting, standing, hiding under the table, pulling each other out of the seats or thrusting each other into them. There is always a sense that the dancers are moving from one emotional drama to another, fluently and without much question or much attempt to resolve anything.

The set goes through a few more incarnations (moved choreographically by the ensemble) before the twelve chairs appear together again, now in three rows of four, as if a classroom. (It is important to note that now the chairs occupy only stage left, whereas at the beginning they were evenly distributed on both sides. This may be Varone’s comment on language’s orientation toward the left side of the brain. The suggestion that the lateral orientation of language in the brain has a direct effect on our architecturalassumptions is enticing.) The dancers occupy the chairs, one in each. Behind them, the mad-scientist/dancer is projected alone in the white room as he sounds out the syllables of his language. The dancers repeat after him, imitating his hand gestures, like sign language. Then they each practice at their own rate, impressing the language into their bodies with through repetition. We see here any number of metaphors for instituting language, whether it is the Pledge of Allegiance,The Lord’s Prayer, or, I canonly imagine, a suicide bomber in training. We also see how a language is nothing without disciples. And, in this representation, the students are complicit in their willingness toabsorb the information and to pass it on.

From this point thedancebecomes an exploration of how a language is applied to life, to interpersonal relationships and to our environments.

The first crisis is, maybe too obviously, between two men. The class actually ends with one man jabbing the other in the neck with one of the hand signs. They eventually spin out into afull on dance-cum-wrestling match, replete with an aggressively one-sidedkiss, and culminatingwith one of the dancers (the larger of the two) seemingly raping and murdering the other.Only then does the alpha male feel that it’s safe to cuddle against another man, which he does. I found this to be a dangerous, even easy assumption; that language frustrates men, and that men quickly reject language anddefer toviolence,to the brutally physical. This observation was almost immediately substantiated by a duet for male and female dancer, beginning in the same position that the male duo had ended in, but now the music was tranquil and longing, the couple loving and sensual, nudging and rolling over each other. Varone’s ideas about gender relationships infiltrate the piece too much here and create dramatic confusion that had previously been averted by his ingenious phrasing and ambiguity of gesture. But for a moment, intentional abstractiongives way to pseudo-realism toupsetting affects; there is even one moment when the female dancer pins down the male with her belly, her arms arching upward in flight. Theimage ofa woman trying to hold down a guy (here quite literally) with the threat of conceiving a childis certainly cliché and sadly political for a piece that had soprecisely walked a non-partisan line.

But after this, the piece returns to more neutral territory. There is a beautiful passage for dance veteran, Peggy Baker, who impressed throughout the evening. Thenanother female dancer ends up alone against a single wall piece, fidgeting, no doubt a sign of discomfort with language, although here, instead of aggression (like the frustrated male), she succumbs to fits and tears, only to be surreptitiously pushed off the stage by the wall that we discover is being pushed by a large group of the dancers. Her punishment for failing to use language is seen as social rejection, whereas the male received no punishment, but rather prestige.

To be fair, there is a moment of masculine humility.A male dancer (the one who has been depicted on screen as the inventor and instructor of the language) finds himself alone, enclosed by three of thewalls. With no pen (he tries at one point, pointlessly to write with his bare hands on the floor) and no disciples, he is lost and scared. There is no object to realize his language, and no human to share it with. He cries out and falls in defeat to the floor.

By this time the ensemble hasgathered once again in three rows of four chairs stage left, now wearing coats, now ready for the next chapter. They chant again. The teacher stands before them. They raise their right hands in the air, then pull them close over their faces. The teacher assumes his place among them (there had been an empty chair) and imitates their hand gesture as the lights fade.

The score for the evening is by Nathan Larson. It travelsthrough many of its own terrain. He attempts, at the very beginning to challengethe limits of language by inserting reversed snippets of singing. This is later joined by two of the dancerssinging (live) a series of vowels that continue to eschew any language we might understand. For me, theconceit here didn’t match the depth with which Varone explores the subject.Knowing what is possible to do with music (from the poppy hooks of Missy Eliot to the more academic fare of say John Cage or Luciano Berio)the result of the scoreseems timid, despite its most adventurous moment; a solo male voice climbing toits highest, weakest register, flounders in precarious strain.

The combination of live and prerecorded sounds was less successful than Varone’s combination of video and dance. The inclusion of a live cellist and drummer seemed completely unnecessary; they were miked and amped up as loud as the electronic score (itself having lots of rich, agitated string passages and delicate,electronica rhythms), to the point that there was no audible distinction; no effective result. Neitherwas there aninclusion of the live instrumentalists on the stage (they were huddled off down and front), which made their presence especially confusing.

The real dense terrain in Doug Varone’sworld is language.With the exception of a few off steps, this worknavigates thisground triumphantly through the inchoate language of dance.