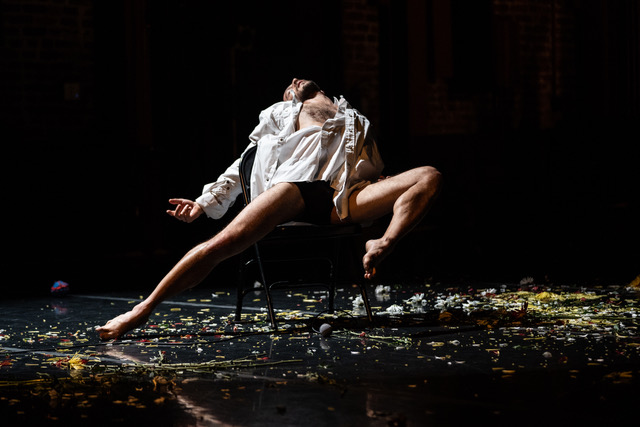 “ECHO/riding the rapids” is an explosive improvisational dance layered with abstraction and poignancy. It exploits the unsinkable sexuality, musicality, and embodiment of its guest dancer, Jesse Zaritt and the multi-layered talent of composer, performer and award-winning media artist, Pamela Z. Within this very raw usage of theatrical space Zaritt tears it up with spark-flying charisma, whipping and smashing bouquets of chrysanthemums, flinging ash and sensuality, seducing and delighting with his liquid masculinity. Seated with the audience, choreographer Sara Shelton Mann interrupts with random questions and choreographic suggestions. Later, stopping Zaritt in his sweaty flight and panting breath, she stands beside him on stage with a handheld microphone, pointing out, as if we hadn’t noticed, “Isn’t he a fine specimen?” Zaritt indeed is magnificent, but there is a socio-political innuendo in this casual remark. Could a male choreographer get away with that statement in this day and age about a female dancer during a performance or anywhere else?

While Mann interrupts and injects the dance with questions and commentary, Zaritt either responds or ignores her random suggestions, replying as he chooses. Pamela Z overlays and manipulates Mann’s comments with echoes of overheard conversations ranging from climate change and abortion to chemtrails. Performers Abby Crain and Jesse Hewit make mostly cameo appearances with gestural actions to keep breaking up both the space and choreography. Mostly they disappear offstage with Hewit’s actions feeling the least developed throughout. Fortunately, Anya Cloud’s fleeting appearances returns deeper into the performance with a more substantial solo and a duet with Zaritt. The impressive part of their dance together is not only how Cloud’s uninhibited female sexuality and fluidity complements Zaritt’s, but how he rein’s in his commanding stage presence to become an equal partner with Cloud, almost disappearing the relationship.

“A murmuration of sparrows. an unpleasantness of ravens, a murder of crows…” a recited venery floats through Z’s hyper manipulated soundscape as Cloud returns to the stage with her hands full of feathers as if sensually molting. The feathers become another element to shatter space, snowing down or hurtling through it. And where moments earlier Z was seen pouring herself a martini, she leaves her techno set up to sing operatically across the stage. Her singing is deconstructed again with loops and electronic wizardry even wirelessly manipulating Cloud’s puppet-like movement.

“ECHO/riding the rapids” has a very rich, oozing structure that attempts to hold together and to elevate some very seductive and orgasmic dancing. It is as much Performance art as it is a showcase for Zaritt and Pamela Z’s unbridled talent. ECHO’s structure and commentary is as ephemeral as ash blowing in the wind and at times as stunning as a murmuration of starlings.