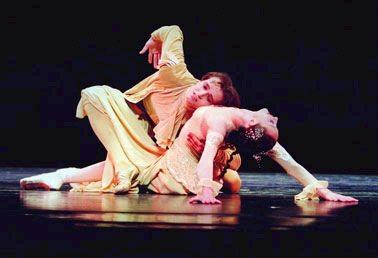 One thing of which Boris Eifman cannot be accused is subtlety. The contemporary Russian choreographer, who runs his own company out of St. Petersburg, has been variously touted and excoriated in the press for his sexy, emotional, over-the-top story ballets. Well, never mind the press. If the rapturous audience reception of his Anna Karenina at Berkeley&#146;s Zellerbach Hall is any barometer, just plain folks love it.

Tolstoy&#146;s famed tale of infidelity and regret is as overblown in Eifman&#146;s interpretation as the Tchaikovsky music to which it is set. He almost hits you over the head with symbolism. In the first scene, Anna says goodnight to her little boy who is playing with a toy train, foreshadowing the locomotive which will kill her at the end. At a ball, the good people of the town are dressed in shades of gray while Anna and her husband stand out in black.

But who cares when the dancing is so terrific? Maria Abashova is so beautiful in the title role, it&#146;s easy to see why she is the center point of this triangle. Albert Galichanin suffers nobly (and athletically) as her betrayed husband and the muscular Yuri Smekalov is riveting as the lover. Once Anna meets and falls for the dashing officer, Vronsky, the town gossips bouree to a pizzicato scherzo while they whisper about the scandal. The officers of the garrison strut their stuff before the ladies of the town with a series of quirky leaps and Karenin writhes in jealous, vengeful agony to the strains of the Francesca da Rimini. (Although the music works for the most part, Eifman&#146;s choice of snippets is almost amusing. Of course, the tragic ending is set to Romeo and Juliet).

The corps has a great deal to do as the choreographer interpolates scenes of drunken soldiers collapsing onto one another like dominoes and a masked ball into the action to lighten up the angst. And they do it superbly (with the exception of one quickly-covered-up fall on opening night). At the end, the men of the corps mass and chug to actually become the menacing train before which the distraught heroine flings herself. It is a remarkable device.

But the steamy sex scenes between Anna and Vronsky are at the heart of the matter, as is Anna&#146;s breakdown. Torn between the two men, Abashova is tireless in transformation, wracked with regret at one moment, buoyant with joy at another. Forbidden by Karenin to see their son in her disgrace, she returns home and begs for mercy. But, when her husband approaches her she recoils from his touch. She moves like an automaton when she does move; otherwise she is a dead weight, like a rag doll. She returns to Vronsky but it is the beginning of the end.

Anna&#146;s breakdown is set to cacophonous modern music, not Tchaikovsky and danced in flesh-colored unitards by the heroine and the corps. It&#146;s a kind of nightmare vision of Purgatory with flashing strobes and whirling bodies. Again, not subtle, but interesting. Actually, the entire evening was interesting, with nary a dull moment. Although not for the purist, there is something to be said for Boris Eichman&#146;s particular brand of psycho-eroticism. And he says it best himself: &#147;Ballet is a very special art form that gives us an opportunity to permeate into the subconscious and dive into the heart of psychological drama.&#148; Dive he does and whether the work sinks or swims is in the eye of the beholder.