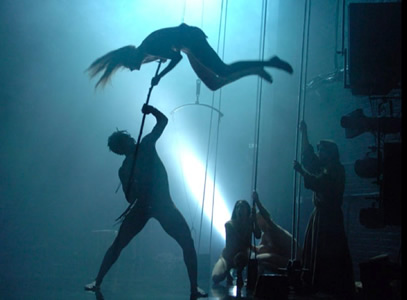 Martha Clarke’s productions often slide between the seams of defined genres. For instance, her revival of Garden of Earthly Delights could aptly be described as dance, yet it defies that category in part due to its location at the Minetta Lane Theater, its ticket price range, and a planned three-month run. For those who go expecting more traditional theater, perhaps this confection of movement will coax them to see more dance.

Clarke, whose productions have been in the public eye for upwards of three decades, is a creator whose work has been recognized with numerous grants and other institutional laurels. Yet she is not a household name. And the scope of her productions, which are often based on works of visual art, is large and best produced in longer, theater-style runs, rather than the dance world’s week-long norm. (The harrowing story of re-mounting Garden, which premiered in 1984, is told in this New York Times article.)

Garden of Earthly Delights involves only movement and music, provided by an onstage trio in monks’ robes. The eleven performers are all skilled dancer/actors; some are fixtures from established companies, such as Marjorie Folkman and Jen Nugent. The company wears flesh-toned unitards that are somewhat revealing, but not tawdry. They enter walking on all fours, after awhile looking like some kind of gawky species.

Over the course of the hour, we see them evolve from paradise, the fall (symbolized by the biting of an apple), through a rudimentary and ugly form of civilization as we’ve come to know it (in coarse burlap garments), to purgatory (back to unitards). Some humor lightens the “dark ages” section; one man appears to swallow whole a dozen potatoes, the valued commodity. But even these meager possessions lead to covetousness and violence.

The movement is action-based, with really no dance steps to speak of, although they all move with intelligence and purpose. The first time one of them dons a rigging harness, it’s odd because they are in plain sight. But you soon grow used to people moving on the sides of the stage. And it is sheer intoxicating poetry when a man carrying branches stag-leaps weightlessly in circles.

Fascinatingly, the dancers also behave as stagehands, working the ropes to levitate a harnessed performer. Watching this becomes nearly as interesting as watching the central figure. It also makes you appreciate the intricacies and teamwork that go into such a production. The Minetta Lane Theater’s cube-like space makes for an ideal setting for the production’s signature aerobatics. The most powerful moment is when a woman flies out over the audience, tumbling head over heels, her long hair nearly brushing some in the audience. It is liberating, terrifying, and exhilarating.

The simple pleasures and grotesqueries of Garden offer a wonderful alternative to the desperate, relentlessly commercial grind of Broadway.