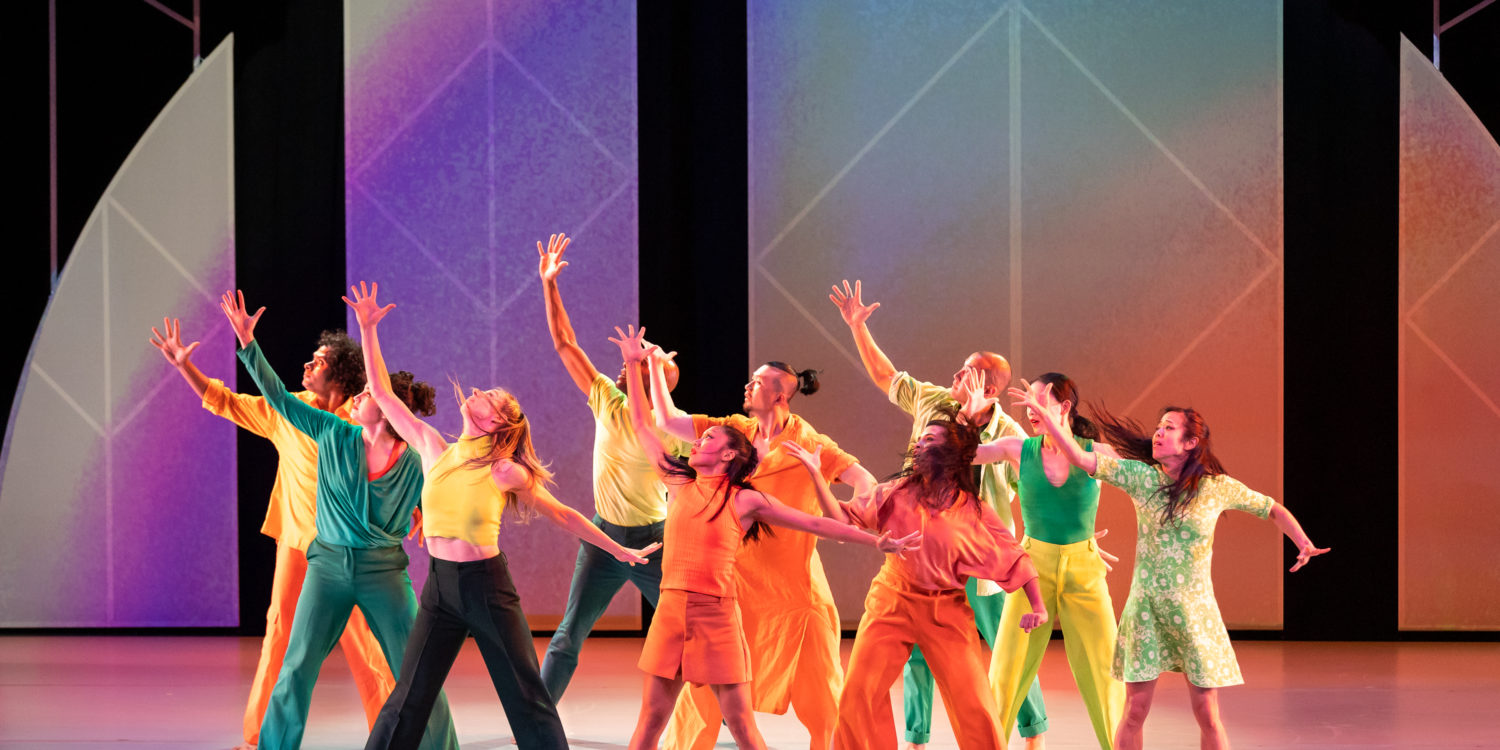 “How long have we been asking these questions?
After how many trains taken?” Rinde Eckert, Michael Palmer

“Global Moves” mysteriously begins outdoors in the wooded area across the street from the Presidio Theater’s outdoor courtyard. Through the breeze, the faint sound of bells and gongs drift over the audience, seated surrounding a rectangular patch of lawn. From the courtyard, composer-musician Paul Dresher begins to chant a raga, accompanied by Joel Davel on percussion. The chanting is timeless and transportive, adding to the tangible anticipations and high expectations for this 50th Anniversary of the Margaret Jenkins Dance Company. Like forest monks, the dancers descend from the hill, ritually opening the iron gate and taking their places on the green lawn on a spectacularly sunny warm day in San Francisco. They wear cotton earth-tone loose-fitting pants and blouse-like tunics traditionally worn by monks and farmers in Southeast Asia (Mary Domenico, costume design.)

Awkwardly, self-consciously the movement monks meander on the green–representing several different cultures, races, and collaborations between their countries and MJDC. They move tentatively towards the audience and each other before starting to interact with more lyrical choreography, slowly connecting in pods and clusters that quickly dissolve and reconfigure into different groupings, eventually leading the audience from outdoors into the newly renovated theater :25 minutes later.

The contrast between the outdoor light and the dark cool inside the theater is dramatic. A simple set design (Jack Beuttler) shaped like a tunnel entrance cut into four sections—perhaps the gates at a train station or airport–catches video clips and graphics as dancers begin to wander in front of this shape. Only now, Rinde Eckert (text and narrative designer) joins them. Eckert wears a hat and scarf, carrying a suitcase that confuses the abstract movement of the choreography with something literal and seemingly out of place. His race, age, sex feel incongruous with the display of races and youth surrounding him. Does he represent a stereotypical Caucasian male tourist visiting “exotic” cultures, where culture is viewed but not engaged? There is nothing to indicate in his presence that assimilation or integration is happening. Is there a narrative in his presence and wardrobe beyond the text he has written with Michael Palmer, a text being read from the orchestra area by Palmer and Ellen McLaughlin? The multi-colored, youthful dancers move around him, in jewel-tone costumes, vibrantly and full of potential, to his elderly presence and pedestrian walking. Which, ironically, isn’t enough of a contrast to make this an interesting or believable juxtaposition.

In a few video clips, different soloists appear in outdoor settings with minimal and repetitive movement, as dancers on stage continue to meander, occasionally bubbling up into brief dance segments in small groupings and solos without any significant relationship to the dancer in the video or to Eckert. Meanwhile, Dresher and Davel’s sumptuous score and Eckert and Palmer’s poetic narrative have a life of their own, often pushing the performance or asking for the ambling choreography to catch up. Are the less remarkable moments in the choreography the contribution of the different companies, with Jenkin’s work primarily featured in the more engaging last:40 minutes of a 2-hour production? Only towards the end of this lengthy production did the choreography comes to life, showing Margaret Jenkin’s trademark for relentless, focus-driven movement and momentum. It’s curious whether her movement vocabulary was also influenced by this collaborative process and working with other choreographers?

Eckert is a traveler, but what’s in his suitcase? Is it full of promises, time, memories? Is he lost? Out of time, out of place? Is the choreography struggling with the weight of its subjective and joint intentions–collaboration and borderless frontiers? Yes, this production survived the pandemic and teamwork with different dance companies from other countries, indeed noble feats with kudos due to all involved. And for many, just being able to see a live performance will be joyous. But what is it that genuinely makes an international project truly noteworthy? Is it not in the final product? And would those results be different or convey a similar message if the collaboration was a multiracial domestic one?

“Global Moves” has many solid components but lacks a central tension. Yet, clearly, there had to be stress in the collaborative process, especially between countries, pandemic, and the pressure of launching the 50th season? We can only take on the dance at face value, not influenced by the admirable historical content of its process, our longstanding admiration for the Margaret Jenkins Dance Company, or her longtime collaboration with the talented Eckert.

Perhaps, a making-of film of the “Global Moves” process would deliver more cohesive and engaging results, more adequately showing off its many intricate layers.