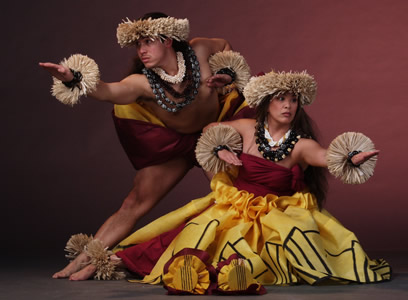 Hãlau o Keikiali`I is a Hawaiian Cultural and Dance Group based in San Francisco since 1994. Their goal is to educate the general public about Hawaiian Culture, with its traditional customs, values, and protocols. On paper this may sound a bit ambitious but all they have to do is undulate an arm, sway a hip, stomp-march in drill team precision, or chant the ancient songs and their mission is instantly realized.

Like all ethnic and cultural dances, the art form can not be separated from the culture that gave it expression, anymore than the culture can be separated from its particular environment – which is both elemental as it is cosmological. In this sense, all dance, even that of the ultra modern and minimal, is born out of the immediate environment. The more authentically connected dance is to that environment, the more the environment gets distilled to its elemental essence and the further back audiences, and dancers alike, are drawn and connected to an original source – a dancing cosmic source.

Hãlau o Keikiali`I program, “The Power of Healing through Hula” began the way all Tantric and shamanic based ceremonies and rituals begin – by making offering – by transporting participants from ordinary mindset to the cosmological, by connecting our awareness to the invisible supports of our immediate surroundings. Songs were made from the back of the auditorium, chants called out like clearing a forest path, while asking for the favor of the path as dancers moved towards the stage. As they streamed down the riser steps of the auditorium, two women with fern and coconut shell in hand, sprinkled seawater on the audience and the space for purification. They sang asking permission to enter into the hula, built an altar to call forth Laka, the goddess of hula, placed offerings for her and sang the various songs for putting on clothing and leis. Their Kumu (teacher of the Hãlau – hula school -) served as high priest, narrator and singer/musician.

Once cosmic forces had been called in and the space and dancers had been purified, the hula officially began. Each hand gesture (mudra) articulating the mythological stories of the creator goddess Pele and her healing sister Hi`iaka and each thrusting pelvis telling a tale of Pele’s orgasmic lava creating land and life – the universal and tribal act of procreation. A fierce body slap is a sign of self-defense or the elements of nature, while unison pounding of (Kalã`au) tall sticks is a tribute to the power of a great king or chief.

Yet not all hula is ancient, and the program lead us also through to the modern, almost cliché-ish, songs of contemporary hula that can’t help but make one feel like a tourist, instantly transported to Hawaiian resort luau, with string guitars and ukuleles. But, so the dance, culture, and environment go…

Still, there is much to love about hula as both participant in a ceremony and as a tourist, even with its mix of dancers being different ages, their variations of Polynesians ethnicity, the range and degrees of training by its members, and the anomaly of haoloe participants – which in other venues would be criticized but in the hula create the tribal weave and aliveness of its tradition. Especially beautiful is being mesmerized by those elders of the Hãlau, like Kia`I Maurille, whose refinement of gesture and containment of movement is at once subtle as it is captivating and transportive as the unexpected whiff of a plumeria and tuberose.