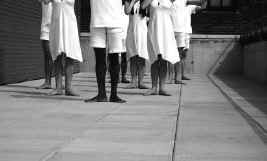 Now that he&#146;s temporarily done with the life of a TV Star (Sex and the City), Mikhail Baryshinikov has gone back to dance. Easier said than done when you&#146;re 58, but with a brand new, state-of-the-art performance center and a resident dance company, Hell&#146;s Kitchen Dance, it is clear that he doesn&#146;t intend to walk away anytime soon. For the record however, he still dances, beautifully. In their inaugural tour, Baryshinikov was in two out of three dances himself. While the themes of the dances (by Aszure Barton and Benjamin Millepied) hovered too much on the theme of not dancing, there were also some gorgeous moments that featured Baryshinikov right in the middle of his squadron of very young dancers (most of them are recent graduates of Juilliard and NYU, some are still in school).

For years now, Baryshinikov has pretty much forsaken classical ballet and gone into the more-forgiving techniques and non-techniques of modern dance. However, Barton and Millepied both come with ballet pedigrees (Millepied is currently a principal dancer at New York City Ballet, Barton danced with the National Ballet of Canada) so the choreography they present is still influenced by such balletic vocabulary as pointed feet and graceful carriage of the arms. But while Millepied&#146;s dance, "Years Later" is a direct homage to Baryshinikov, including way too much dreamy video of the Russian star standing on a beach wafting around his arms, Barton looks like she has some ideas of her own, and isn&#146;t particularly bowled-over by the fame and fortune of her boss.

"Come In" a new work, featured lovely, elegiac music by Vladimir Martynov (taped) for strings. There was more film (this of pastoral settings, snow on the ground) and a lovely use of space for the entire cast of fourteen. One phrase stated by Baryshinikov and taken up by one of the young bucks and subsequently joined by the other five male dancers, turned into a stunning, playful display of power and soft virtuosity. And then the older dancer stepped out to watch.

Of course there needs to be a reason for a 58-year-old to dance with thirteen 20-year-olds, but the reason doesn&#146;t have to be evident. In the classical ballet world, where 35-year-old ballerinas play the 14-year-old lead in Romeo & Juliet without batting an eye, there is a long history of ignoring age. The founder of Hell&#146;s Kitchen Dance would do well to look at such an idea. At least it might open up thematic possibilities. He has a beautiful gang of exciting young people to work with now. Perhaps he will stay out of the way, and let Aszure Barton have her way with them.