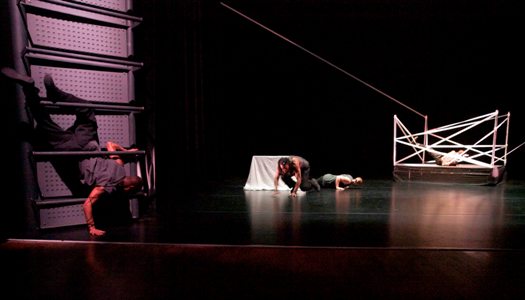 Since I’d missed the first 11 Hip Hop Dance Festivals, it was time for me to get with it and attend the 12th. The fabulous Micaya, producer/artistic director, presented 22 companies, mostly from San Francisco but others from Oakland, Vacaville, Calif., Colorado, New York and London. Micaya is considered the “grandmother” of this festival: she has taken good care of her performers.

Many of the companies in Program B offered good, lively, colorful events, displaying amazing energy, executing “moves” that leave the audience screaming for more. There were lots of bounce and flips, turning on the head, kicks, waves and wiggles. Friends and family in house called out for their favorites and asked for more. In this category, I would praise Academy of Villains from San Francisco and the New Style Motherlode from Oakland. The Oakland group danced on levels way above the stage floor.

A delightful throwback to old vaudeville were the GroovMekanex, five gentlemen in white jackets dancing to The Temptations. They brought us back to the days of good Las Vegas nightclubs.

Three or four groups were distinguished for this reviewer, primarily because they brought choreographed dance dimension and dramatic focus to their work. Outstanding was the London group Spread Expression, whose piece (“Yes, I Still Exist”) dealt with contemporary slavery to excerpts from speeches. This group brought to our attention and horror that 45 million people are enslaved, in the sex trade, in the military, in sweat shops. With only five company members, their presentation, which was both a protest and a lament, brought new depth to hip hop.

With similar concentration, the New York group, Decadancetheatre, performed “The Cage,” a work that concentrated on an offstage focus, allowing the five woman dancers to somersault back away from the offstage light and to more toward it with gestures of excitement and fear.

Kenichi Ebina is a star from Japan and New York. His narrative finale was entitled “Eclipse-Ninja” and presented a series of events, dramatizing the victory of the Ninja over an evil warlord. With the help of video projections and several changes of costume, Ebina was able to dance both male and female roles. He combines aspects of film and Kabuki drama.

The dozens and dozens of dancers gathered for a curtain call with Micaya. They all deserve the applause and appreciation that brought down the house. We look forward to the 13th Hip Hop Dance Fest in 2011.