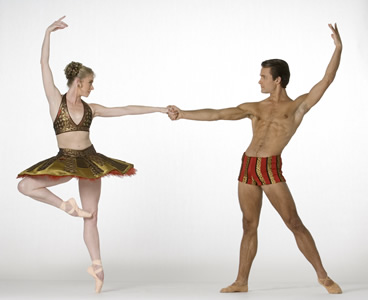 Tu Tu revealed the mighty talents of its dancers in a shimmering display of technical bravado. Welch’s show-off piece brings out the distinct personalities of each dancer. Barbara Bears smolders in her adagio solo; her elongated movements seemed to stretch space and completely held our attention. The regal Amy Fote and Simon Ball scamper about in a study of quickness as the red couple. Sara Webb and Connor Walsh continue their magical chemistry as the gold couple. Walsh gobbles up space with his long limbs and high-air jumps while Webb grows ever more dimensional in her radiant dancing. Katherine Burkwall-Ciscon’s stirring rendition of Ravel’s piano concerto in G major captures both nuance and melodic energy. Gorgeous Gustav Klimt-inspired costumes by Holly Hynes provide a feast for the eyes. Lisa Pinkham baths the dance in a skin-friendly warm glow creating a striking contrast between the velvety blackness and the jewel-toned tutus.

Christopher Bruce’s elegiac ballet, Sergeant Early’s Dream, demonstrates the company’s comfort in a more modern dance vein. The ensemble dance out stories of assimilation, loss, and longing in touching vignettes that reveal stories of difficult and jubilant lives. Webb enchants as the little girl with her crisp folk dance and innocent demeanor. Kelly Myernick, a soulful dancer, masters the use of weight and power so important to Bruce’s choreography. Myernick’s substantive performance most embodies the difficulties of the times. The men’s ensemble lifts spirits in ballet’s equivalent of a “drinking song”—one of the few lighter moments of this solemn ballet. Walter Nobbe’s seascape grounds the dance between earth and sea making a powerful metaphor for the immigration experience as one of being in between worlds.

Robbin’s The Concert ranks up there as one of the most wonderfully silly dances of the last century and feels amazing fresh for a 51-year-old ballet. It’s slapstick all right but who can resist a bunch of ballerinas crashing into one another. (Bears is a hoot as the flattened ballerina.) It’s not all a giggle fest; there’s a poignant section with umbrellas that touches a bittersweet chord. Starting with a pianist with attitude dusting off the keys (the wonderful Burkwall-Ciscon again), mayhem, mirth, and downright clowning quickly ensue. The usually elegant Bears stiffenes up nicely to play the uptight society wife. Melody Herrera, in a ski cap and black glasses, is a crack up as the nerdy bully. Fote hams it up big time in her off-the-loony scale performance. Showing off slick comic timing, she plays the narcissist starlet complete with floppy hat, butterfly wings, and antennae with great finesse. There you have it—ballet can be funny.