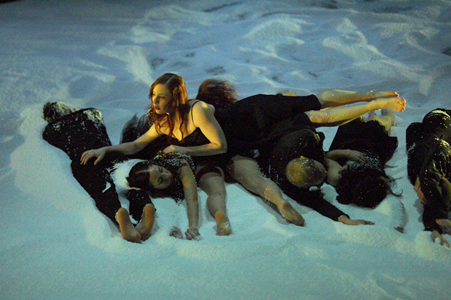 It’s been pretty warm so far this fall, thankfully. But Inbal Pinto Dance Company’s Shaker, at the Joyce, might put you in the mood for a cold snap with a winter wonderland of a set, based on the concept of a snowglobe. A thick layer of fake snow blankets the stage, and a horizontal baffle hangs in front of the cyc, cropping the proscenium to wide-screen format and compressing the stage action.

Pinto choreographed Shaker (video clip below) with Avshalom Pollak. They also designed the set, costumes, and selected the music. Their vision is fairly unique these days, more whimsical and sentimental than most work done in New York. Three doghouses sit upstage, out of which emerge the twelve performers. There’s a woman in an evening gown spinning out a ribbon dance, and later sharing tea with an older man in a striped suit; a group of women in black sundresses (a bit puzzling, given the snow… maybe it’s sand?) with long, fling-worthy hair; a dog/mime; and several dancers in head-to-toe unitards in hues of snow, ice, sleet.

The snow is an excellent excuse for the dancers to slide wildly across the stage, or drag a limb through it causing a plow-like wave. It muffles their footfalls, echoes the arcs of their tossed hair, offers a cushion on which to body flop. The performers split into small groups or pairs. Two men partner the dog/mime, gliding her above their heads. Dancers disappear and reappear through the doghouses, or sit atop them like gargoyles. A man manipulates two women by their ponytails – awkward marionettes to his puppeteer.

Eventually nearly everyone wears a unitard, some of warmer colors. Pinto’s Batsheva roots become more evident in an ensemble line dance with wide, weighty steps ending with a sassy flick of the hips. Sometimes, the solos evoke Pina Bausch, with sensual arm and torso work embellished with long trailing hair; the exotic-sounding folk music adds to this feeling.

The songlist (recorded) is eclectic, but often oddly cliche. Did they purposely choose music frequently used in dance (by composers such as Purcell, Part, Chopin and Reich) as a sardonic statement, or simply as straight accompaniment? Or just to balance the more exotic Japanese and Swedish selections? Uri Morag designed the lighting, which ranged from Arctic to summery, and contributes strongly to the theatrical vision. It ends with a giant version of the striped suit sauntering across stage, past the ribbon dancer, another haunting, if mysterious, vision.