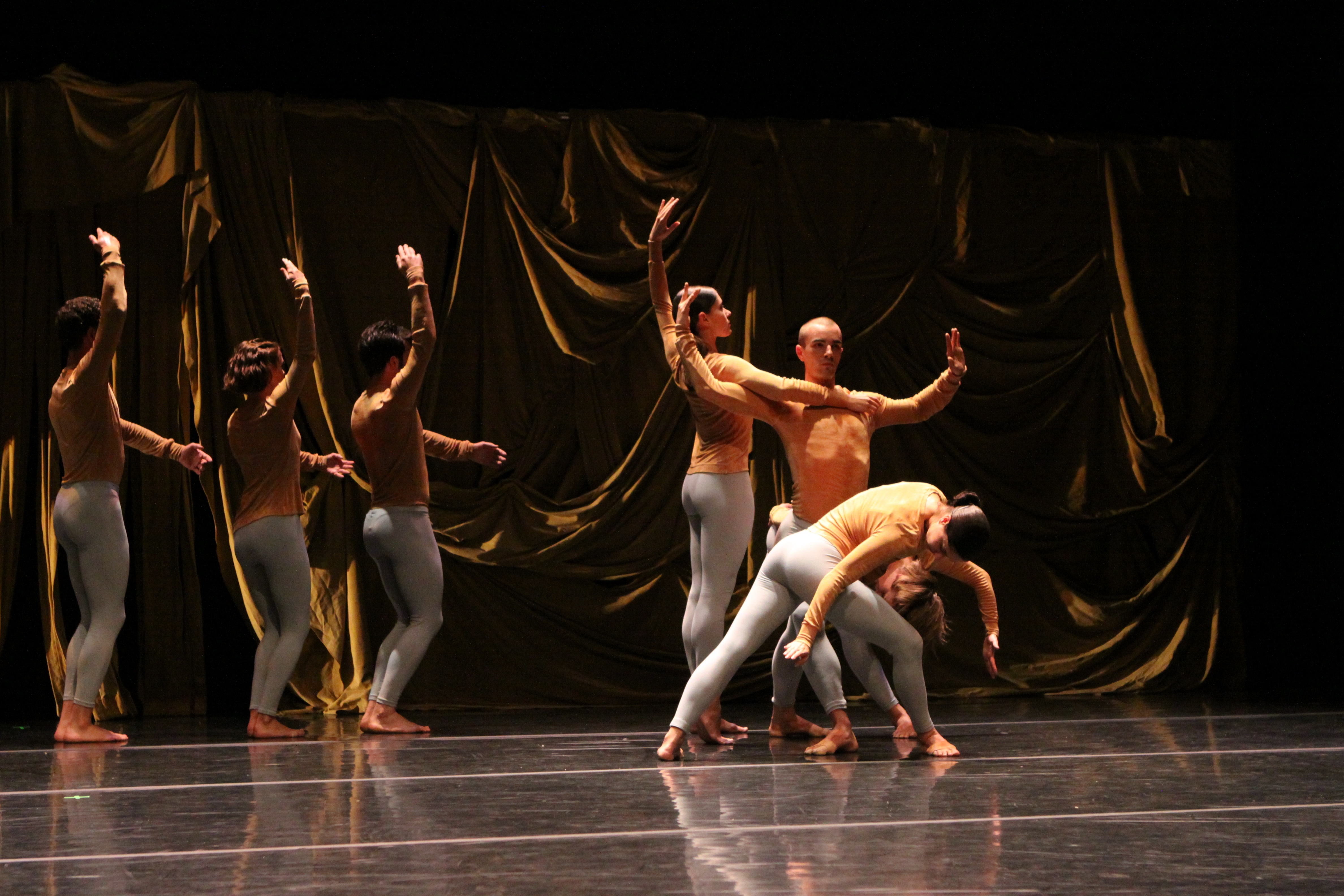 When Robert Swintson comes charging through the heavy gold drapery in Merce Cunningham’s Sounddance (1975) during a recent performance at Jacob’s Pillow,  there’s a sense of urgency, a “watch this now” feeling. Gradually, the rest of the troupe also catapults through the center divide. Sounddance has a utilitarian/task-based focus and Swintson, in Cunningham’s role, plays the ringmaster of sorts, sometimes orchestrating the action, and other times, quite literally, placing the bodies in order. Sounddance contains a spectacular range of qualities, some distinctly unique to this piece. Sometimes caught in each other’s tail wind, limbs like tentacles dangle and float in the more elegant moments. Groupings come and go as the dancers seem caught in an orb or vortex that propels them onward. It’s like a slice of now, a glimpse of some ongoing universe that we are suddenly privileged to watch. It’s equally fleeting and exciting.

Mark Lancaster’s heavy gold curtains conjure a cryptic barrier from the past. Lancaster and Aaron Copp’s lighting bathe the proceedings in a warm glow. David Tutor’s pulsing score adds to the drama of the moment, a Cunningham specialty.

EyeSpace (2006) comes with iPods for the audience to layer in sound. Why add a scratchy score to the live one already going on provided by Fast Forward and Stephan Moore? I ended up turning mine off, after all Cunningham is all about choice.  CRWDSPCR (1993), performed with dash and exactitude, had a museum piece quality to it. It’s strange that the two newer works on the program felt older.

Cunningham first performed at the Pillow in 1955. It would be another thirty years before the company performed again at the Pillow. This season he was the recipient of Jacob’s Pillow Dance Award. Hours after the curtain closed on the company’s final night at the Pillow Merce Cunningham passed away. An era has ended, the man who freed dance from meaning and metaphor is gone. Dance got to be itself, and all one needed to enjoy the piece was contained within it. Just as Swinston disappears behind the gold curtain as Sounddance concludes, a titan of modern dance also slipped away.