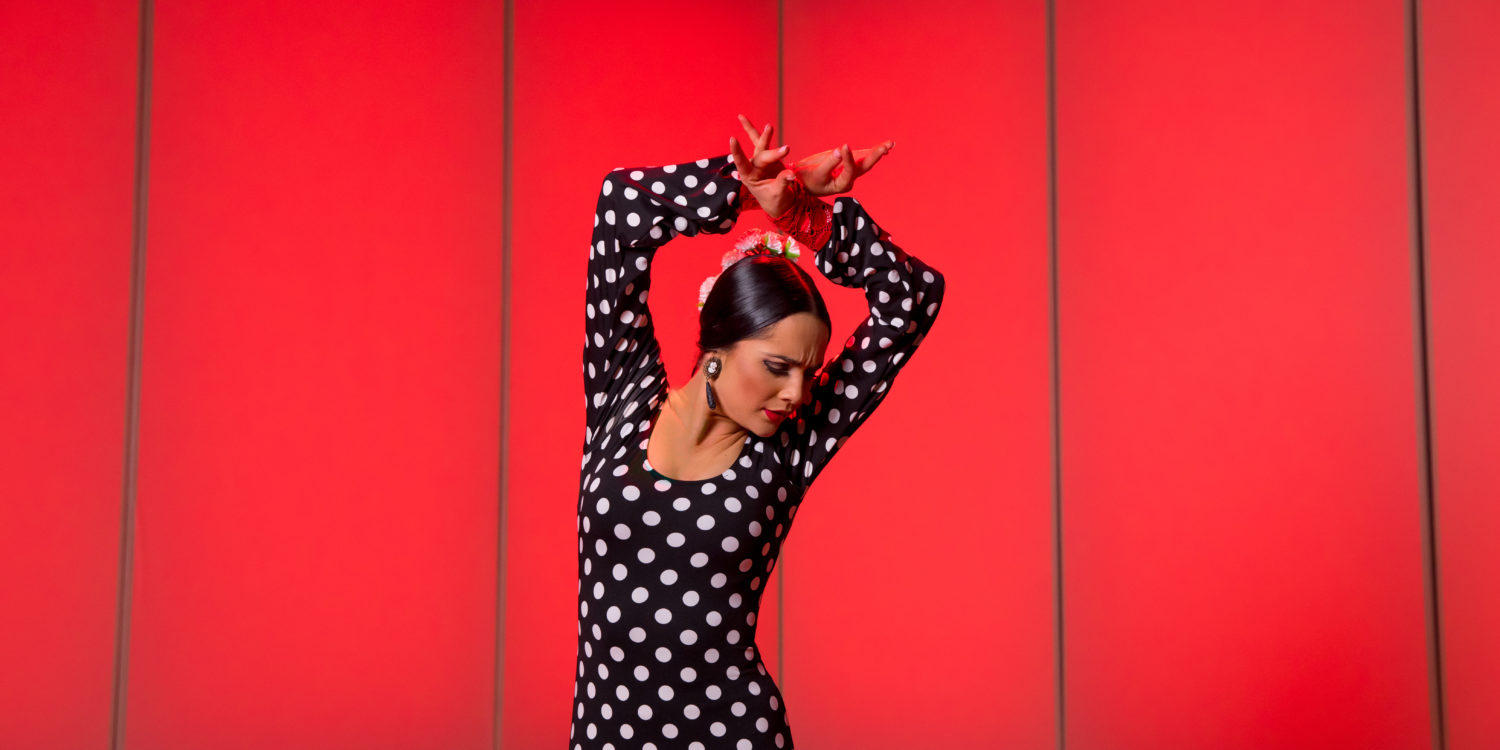 La Emi at the Benitez Cabaret

Flamenco is haven for strong women. Men can flaunt their machismo through loud and lightning-fast footwork, pirouettes and posing, but it is the women who soak their skin-tight dresses in sweat, who send hair-combs flying and work their shawls, and trains, and castanets. It is the female flamenco dancer whose grimace represents centuries of gypsy suffering. They are the representatives of poverty, betrayal, and anger. And it is their eroticism, the power in that coiled-up stance, the voluminous costume wound and then released into action, completed by feet making rhythms against song, guitar, and the men seated around her, that makes it such an unforgettable art form.

Flamenco is also a place for women like La Emi, a young dancer already headlining at the Lodge at Santa Fe, to make a mark in the world. Having worked her way up through the youth company of Maria Benítez, the retired and renowned touring artist who summered in Santa Fe and was La Emi’s mentor from a very early age, through many summers dancing in the background for other artists on the stages of New Mexico, and during annual winter study trips to Spain, she has reached a remarkable place in her career—she gets to call her own shots. However, the road for non-natives dancing in a competitive field is always going to be uphill. How will La Emi compete with all the Spanish-born dancers vying for the same audiences, stages and opportunities?

One thing La Emi has going for her is self-awareness. She knows she is not Maria Benítez. She smiles, looks movie-star beautiful in her gowns, and oozes sincerity. This is different than some of the more world-worn female veterans seen recently in Albuquerque during the International Flamenco Festival, where dozens of top Spanish dancers come to New Mexico for a few weeks of shows and classes every summer. La Emi is all-American. She snowboards, eats healthy and gets enough sleep. She doesn’t even smoke. Gypsy angst may never look authentic on her—and that could be a limiting factor in the long-run.

The show La Emi and her troupe presented at the Benitez Cabaret in Santa Fe this summer (with a limited run through the autumn and dates during the holidays) is like a pink wine—perfect for summer. It is a long way from the the blood-red flavors served up by less stunning gypsies in their cave tablaos in Andalucía. In Santa Fe, the show opened with Danza Española to recorded lounge music, the folk-dancey, ballet-influenced form often performed in soft-soled shoes, with castanets. Later, the three corps dancers appearing in fringed pants, an all-black version of a fad right out of the 1960’s—way before any of them was born. On the tiny stage, a set of translucent panels was moved on in order for the ladies to dance in silhouette. Then there was a number with canes—Liza Minelli-style, but no top hats.

La Emi hired some of her teachers in Madrid to set pieces on her. Gala Vivancos is one of her choreographers. Another, Eloy Aguilar, set a Martinete/Seguiriga, a Farruca and a Caña. What all these dances offered was a style that was light-filled rather than dark, sexy vs. tragic, smiles vs. tears. For those who crave the gut-wrenching intensity of a classic soleá, this was the wrong show.

The star had a male partner (Aguilar) who ably supported her, and, looking older than La Emi, he added a bit of debonair and balance to her youthful charm and sexiness. His bravado was somewhat subdued, he was clearly all about about being in a supporting role. In her big solo, which rotates depending on the night, and was an Alegría’s, La Emi wore a white dress with red appliqués , a red shawl, and a train, and was playful, joyful and precise on this journey of rhythm, movement and song.