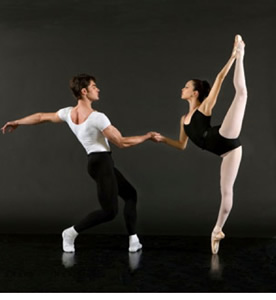 Could it be? Could Los Angeles be maturing into a performance fine arts base and destination? There are two outstanding orchestras, the L.A. Philharmonic and the Los Angeles Chamber Orchestra, in addition to many community based instrumental groups whose caliber is superb as Los Angeles is filled with excellent musicians who can afford to eat thanks to the “industry.” The Los Angeles Opera, under the direction of Placido Domingo, has flourished attracting major voices from all over the world. But the piece of the puzzle Los Angeles has not been able to support is dance, a mystery as many dancers in companies such as American Ballet Theatre (ABT) or New York City Ballet (NYCB) hail from Southern California.

Maybe, just maybe, we are growing up. In one week’s time the Joffrey is coming to the Music Center, L.A. Contemporary Dance Company has launched itself at the Brewery Arts Center, and, best of all, the Los Angeles Ballet (LAB), not to be confused with the LA Ballet of the 70’s under John Clifford’s direction, has opened it’s inaugural season, New Beginnings, at UCLA’s Freud Theatre.

Every thing is not perfect, but wow, two of the three selections were outstanding. All three were extraordinarily challenging. After a shaky start, the company redeemed itself. LAB is blessed by the Artistic Directorship of former NYCB principal, Colleen Neary, répétiteur for the George Balanchine trust – a special distinction making her one of the few in the world allowed to stage Balanchine ballets for professional companies. The evening opened with Balanchine’s Concerto Barocco set to Bach’s Double Violin Concerto in D minor. Written as a school exercise, it became the inaugural piece performed by the NYCB in 1948. Fitting it should open the program, but not the best showcase for this spirited group of young dancers.

Better to talk about the second offering, Agon, also a Balanchine creation. While the troupe was visibly strained in Concerto Barocco, counting to keep pace with Bach’s frenetic score and choreography, in Agon, an even more demanding piece, the corps was crisp, relaxed and not at all thrown by Stravinsky’s equally rapid and demanding score. Filled with counterpoint and dissonance they responded with enthusiasm to the angularity and lack of synchronicity often demanded by the score.

Agon opens explosively with a Pas de Quatre for four male dancers, Oleg Gorboulev, Sergey Kheylik, Andrew Brader, and Maco Doussias. With smiles on their faces they executed spectacular leaps demanded by the difficult score. It was hard to think that even more exciting dancing was to come. The pas de Quatre quickly expanded to double Pas de Quatre, eight women, then a Triple Pas de Quatre, the dancers combined.

Stravinsky and Balanchine created Agon together. Unlikely as the dissonant percussive music heard alone would suggest it is as contemporary as when it debuted fifty years ago. In several places while the women were uniformly on point, in first position, arms lifted, elbows and knees sharply bent they performed a series of jumps never loosing that angular position, always in unison. Don’t try this at home! But breathtaking to behold each time it occurred.

Third on the program was a selection choreographed in 1842 by August Bournonville, the father of Danish ballet. Thordal Christensen, co-artistic director, was formerly the artistic director with the Royal Danish Ballet. He explained that this choreography has been handed down from director to director through the Royal Danish Ballet as it was handed to him. If you are not a devotee of very classical dance, and the thought of dancers wearing wide fluffy skirts makes you uneasy, your instinct might be to slip out at this point. Don’t. Napoli, music by E. Helsted and H.S. Paulli, is a breath of fresh air. Both the dance and the costumes have a folk flavor, light and joyful. Effortlessly the dancers execute the demanding choreography as though it were cotton candy, and radiated joy as though cotton candy were their favorite dessert. It might become yours.

While the program was a little uneven this four month old company certainly is one to watch and cheer for. LAB promises to be a joy as it matures. It has chosen three very difficult ballets to introduce itself to Los Angeles, a definite sign that they are not fooling around. New Beginnings has been offered in three venues, UCLA Freud Playhouse, Redondo Beach Performing Arts Center, and the Alex Theatre in Glendale. This wise policy of exposing the new company to three geographic audiences will be followed again in their summer season featuring An Evening of Balanchine, May 24 – June 2. You can still catch New Beginnings at the Alex, March 31, and I do not think you would be disappointed.