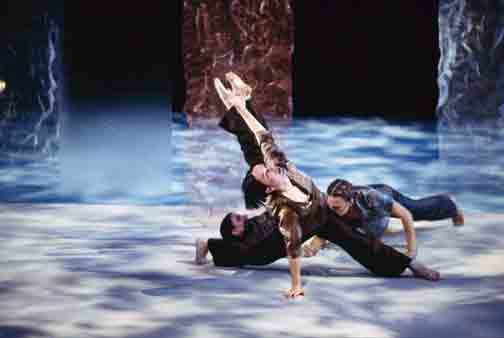 The Margaret Jenkins Dance Company is celebrating three decades of dance in San Francisco &#150; this is a company truly worth celebrating.

The fun starts before the patrons even sit down. A spectacular anniversary exhibition has been installed in the front half of the Herbst Pavilion and, before the show or during intermission, one can stroll through pyramids of wood, a wall of string or fat fabric columns, just some of Alexander V. Nichols&#146; architectural stage designs. The walls are hung with Sarah Woodall&#146;s flowing costumes from past productions and there is an area featuring posters for company gigs around the country and the world. Two movie screens run a film loop of a cowboy riding his horse around in circles and four dancers alternate in live performance on a raised platform at the back. The whole thing is surrounded by sound &#150; musical, percussive, spoken and electronic &#150; composed and performed by a variety of Jenkins collaborators down through the years and lit by Sarah Linnie Slocum. It&#146;s worth the ticket price before you even sit down.

But eventually you do sit down, in the theater that has been installed behind the velvet curtains at the rear, to a full menu of works that span the years from 1978 to the present. And quite a feast it is, beginning and ending with excerpts from the 1993 The Gates (Far Away Near). This is a searing full-company work that expresses desperation, fear, longing, sadness and regret in the first part and calm, recovery and hope in the second, all in response to some real or imagined cataclysmic event. The Gates, as well as several of the other dances, features live music from the Paul Dresher Ensemble.

Jenkins, who trained with Jose Limon and Martha Graham, was a member of the original Twyla Tharp troupe and taught for Merce Cunningham, has a dance vocabulary all her own. A retrospective such as this showcases the development of her choreographic style over the years. No One But Whittington (1978) seems to talk about isolation, as does Fractured Fictions (2003), a world premiere performed in the second half. In Whittington, everybody seems to have his or her own stuff to do. They walk as if on a treadmill, bend and pass through without ever touching or looking at another dancer. You could almost be in the exercise room of an upscale health club. There is a feeling of automation. Fictions makes the statement of aloneness more explicit. Energetic and jazzy, it contrasts frantic movement and utter stillness as pairs and trios couple and uncouple with a kind of "come here, go away" intent.

The spoken word also is an important element of Jenkins&#146; work. At worst, it alternately confuses and bores, as in the overlong 2001 May I Now (18 Questions in the Space of an Answer) an emphatic anti-war statement in movement and words. At best, it amuses, as in the brief Pedal Steal (1985), a variation on country and western themes. At its zenith, it can move the emotions as mightily as do the dancers, as illustrated by two collaborations with the multi-talented Rinde Eckert done in the mid-1980s. Eckert, a gifted writer, actor and singer (and he doesn&#146;t dance badly either) could stand on a stage and read the Yellow Pages and still be the focus of all eyes. The two excerpts in which he performed were the highlight of an already-splendid program.

Shelf Life, Eckert&#146;s first collaboration with the company, is about the American journey, from state to state, shelf to shelf, with a "sell by" label attached to each object encountered. In this case, the scenario was a writer at work and the shelf was his bookshelf. Wandering on and off and around the stage, Eckert soliloquizes, sings and, at one point, picks up a dancer under each arm and carries them around for a while, still talking and singing. You won&#146;t meet many performers who can do that.

If Shelf Life is a tour de force, Shorebirds Atlantic is a knockout, performed by Eckert &#150; who also wrote the text, composed the music and designed the costumes &#150; and Jenkins herself, along with guest artist Kathleen Hermesdorf who handled some of the more strenuous dance. It tells the story of a man who plans his own suicide and enlists the services of a woman he meets in an Atlantic City bar as witness to the event. Poignant, funny and ultimately moving, it also gives Eckert a chance to dance, play the harmonica and sing &#150; all at the same time.

But the Margaret Jenkins Dance Company doesn&#146;t really need guest artists or a rare performance by the founder to shine. The 10 disciplined, highly trained young dancers of the core company do very well on their own.