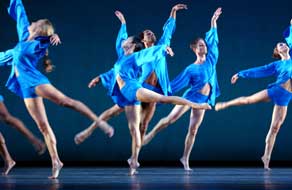 For 1,800 years the Silk Road was a major trade route, connecting China with Central Asia, running through Kashgar, Tashkent, Herat, Baghdad, Damascus–names that to this day resonate of the exotic. Silk and spices, gold and glass, ivory and jade and countless other commodities traveled in both directions. Inevitably, the more profound movement of ideas–religion, political philosophy, science, technology, and the arts–accompanied the movement of goods, cross-pollinating the cultures of all the peoples along the way.

Cellist Yo Yo Ma has used his enormous influence as one of the great performing artists of our time to create The Silk Road Project, seeking through music and performance to explore the varying ethnic roots and interconnections between East and West and the relationship between tradition and innovation in music, significantly including the undertaking of new works.

The Project commissioned a new work by the Mark Morris Dance Group to newly composed music by Zakir Hussain and Ethan Iverson which has had its world premiere in Berkeley, CA. Called Kolam, for the Indian folk art form in which powders are used to draw intricate geometric designs according to strict rules, both the music and the dance are characterized by repeated patterns and variations.

Opening to the soft strains of Ma’s cello, a dancer begins in a handstand, a yoga position. In the most extended solo of the piece, Matthew Rose sinuously dances in moody movements from yoga with repeated variations on the fetal position. After the quiet opening section, the beat and the volume pick up (Iverson on piano, Hussain on tabla and percussion) as the dance assumes the well-known vocabulary of Morris’ choreography, drawn particularly from folk dance forms (reels, squares, circles, lines) with the addition of Morris’ quirky movements–flutterings, twitches, heads atilt from side to side. Here a repeating pattern of two men carrying in a woman is introduced; later movements suggest the dominance of men over passive women and a protective and possessive stance by men over women.

A spotlight creates a large circle center stage. Together with changing pairs of dancers who stand at the perimeter of the circle and bend to the side from the waist with impressive elasticity,an area is defined in which the other dancers create a variety of intricate patterns–it is a Kolam in movement. A slow section of the music is danced with suggestions of birds flying and a reaching upward for the sun.

In the final, faster section with a syncopated, jazzy beat, the troupe wears ankle bells which, along with stomping feet, become a part of the aural as well as the visual experience, as dancers’ sounds do in tap. The backdrop is an abstraction of swaths of bright color splashed across horizontally; in the layering of the color there is a faint sense of painted silk on a massive scale.

The music is repetitive, rhythmic, and hypnotic, with occasional fleeting strains of melody floating above the underlying percussion and bass. The interplay between music and movement makes both seem a seamless unity; the complexity of the whole demands repeated viewing.

The program opened with a 1995 dance, World Power, to music for a gamelan orchestra by Lou Harrison. The theme, stated literally in the choral accompaniment, is one of colonialist oppression, but there is little in the dance that is that explicit. Morris uses groups of three, patterns of four. He superimposes here Asian sorts of movement–shorter running steps, hands arched above the head, the foot turned out at the ankle. Two of the men are notably featured, Joe Bowie and David Leventhal.

The closing work made a fine contrast to the first two. V, a work premiered last fall and dedicated to the City of New York, is danced to Schumann’s exquisite E flat piano quintet. Where the Asian pieces had shorter steps and a more angular line, V uses longer steps, a smoother, more flowing movement in a much more classical and Western style.

A joyous first movement puts the emphasis on diagonals. To a slower, minor key second movement, the dancers are often crawling on all fours; a sense of mourning and despair pervades. There’s a pas de deux during which secondary couples appear briefly, echoing the steps of the central couple, only to slip back into the wings. In a cross-shaped formation, the line of crawling dancers passes through the upright perpendicular line of dancers to emerge themselves upright again.The scherzo returns to brightness and lively upbeat movement–jumps, arms pinwheeling about. The final allegro movement is a brightly lit love fest with repeated embraces.

In a period when dance companies appear to be flourishing and wonderfuly trained and talented dancers are seen with frequency, The Mark Morris Dance Group remains special. Its multi-body-type individuals give the appearance of a casual ease on stage which can only be the product of superbly controlled dancing. Each is an identifiable individual personality, while the sense of ensemble is impeccable. They are the brilliantly tuned instrument upon which Morris makes his unique, music-grounded dances.