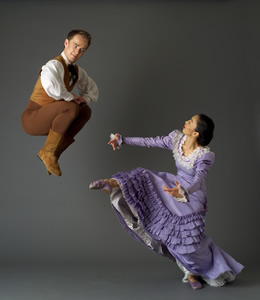 The New Mexico Center for the Performing Arts,

It gets tricky keeping a dance company’s repertoire fresh when the one and only choreographer died over ten years ago. To that end, the Martha Graham Dance Company is sponsoring a contest on its website, in which the public is invited to “Remash Graham History”. Entrants are invited to download videos from the recent remake of the 1958 hit, “Clytemnestra”, choose one of the characters from this Ancient Greek saga–Helen of Troy, Electra, Clytemnestra, Cassandra, or even the Messenger of Death, and then “take that video, and rework it..(in order to) create a modern twist on these ancient characters through current pop culture news, personalities or events.” “Use your 21st century imagination and BRING IT ON!”

Beyond these kinds of radical (and slightly desperate) steps to maintain cultural relevance, there is the idea of introducing new audiences to this old work. If Classical Ballet can do it, why can’t Modern Dance? Arriving in Albuquerque for a sold-out one-night stand, the company presented a veritable “Martha Graham 101” course to the audience, complete with narration, video, and dance excerpts that took you from Graham’s kitschy, vaudevillian roots, all the way to the classic “Ballet for Martha”, “Appalachian Spring” with the familiar score by Aaron Copland.

Traveling with a company of 19, the performance offered enough depth of talent to let you see that her dances were much more than vehicles for self-promotion, although Martha was, always, center stage. Her early piece, “Steps in the Street”, composed during the Depression, with movements entitled: “Devastation—Homelessness—Exile” had the kind of gritty athleticism and powerful angularity that caused America to take notice of this young choreographer. Here was someone moving beyond the ethereality of the feminine ideal, showing women as the bearers of harsh lives. Every step had a jarring quality to it. There was nothing pretty at all.

“Errand into the Maze” (1947) and “Diversion of Angels” (1948) were two well-known pieces presented in their entirety. “Errand” was Graham at the heart of her exploration into feminine mythology and archetypes. The duet for man and woman, or woman and minotaur, was more about sex and power, from the female perspective, with the “accomplishment of the errand, the instant of triumph, and the emergence from the dark” quite possibly about orgasm. In fact, Graham’s entire movement vocabulary was based on the idea of “contraction and release”. Talk about being ahead of her time…

“Appalachian Spring” offered Copland’s music, an abstract but perfectly understandable set by Graham’s longtime collaborator Isamu Noguchi, and costumes by Graham that moved away from Greek sexuality and right into puritanical Americana. Tellingly, the bride (Miki Orihara) and husbandman (Tadej Brdnik) , country folks, carry on in only the most idealistic, non-realized physicality, the female chorus looks like gingham chickadees, and the Revivalist (Maurizio Nardi) keeps things on the up and up. Seated on a rocking chair, looking out across the vastness of the American plain, is “The Pioneering Woman, ” (Carrie Ellmore-Tallitsch), some sort of dreamer, or else Martha herself, imagining herself finally sitting down (she actually played the young bride, well into her 50’s) a prospect she may have only been ablt to begin to comprehend by putting this character on stage and then dancing around her, for years.

This is perhaps the most beloved of Graham’s pieces, because of the music, the theme, and the dancing. But it also offers the opportunity for dancers who can act to do their thing. The “steps” are typically minimalistic, Graham was no Cunningham (challenging the very limits of physical technique) but she was a genius at using simple gesture, movement and stage pictures to tell a story. In Albuquerque, it was a vision of nostalgia, but one which still charmed, especially because of the committed performances of this company of believers. Graham lives on.