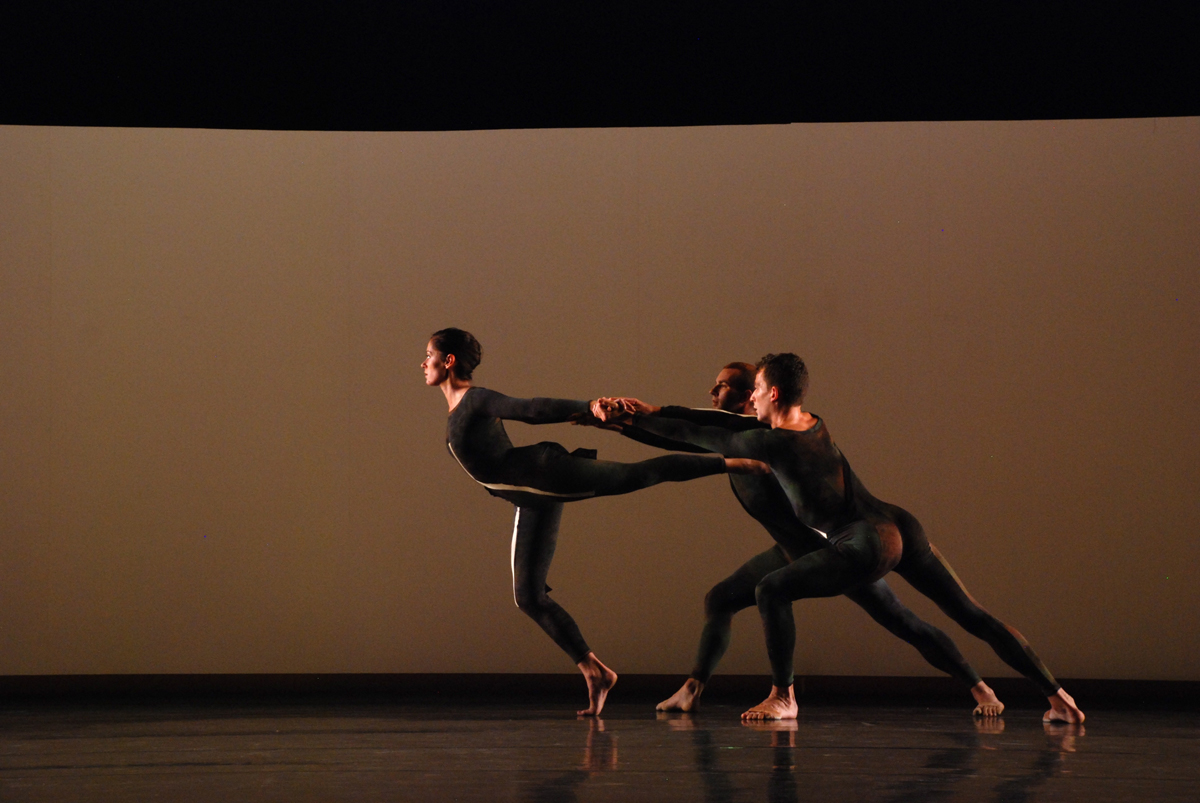 Setting out on the two years of performing that Cunningham directed as his legacy,
the Merce Cunningham Dance Company gave Berkeley audiences his last work  – “Nearly
Ninety(2), a restaging of the work that was done on Cunningham’s 90th birthday in
April 2009 at the Brooklyn Academy of Music. Merce died in July 2009.

Over the fifty-three years that I have watched dances choreographed by Cunningham, I
can report that “Nearly Ninety (2)” reflects all the aspects of his work  I so
admire and that it remains demanding, arresting and always – marvelous. The major
dimensions that make his work so unique are movement invention, rhythmic design and
spatial, even architectual structure.  There is even dramatic tension, though, as
Merce might say, each audience member may or may not find that.

The movement vocabualry is thoroughly grounded in basic ballet mechanics but is
elaborataed with a range of torso, head and arm gestures which change not only the
balance but also visual design. In partner work, the dancers’ bodies are often
off-center. They clasp hands, of course, then, backs, heads, hips and even toes.
These unexpectedcontacts make for wonderful assymetrical patterns and add humor and
surprise to what in other choreographic work might be the usual upright lifts,
support and limited range.

With the influence of his long time collaborator John Cage, Cunnigham chose to keep
the dance independent of music. Although sound/music accompanies his work (this
score was adapted by music director Takehisa Kosugi from the original by John Paul
Jones), the dances are built, rehearsed and performed without dependence on the
score. Thus tempi and rhythms vary continually, so that foot patterns executed by
different dancers at the same time may vary with the coordination of body parts
against the locomotion. A  dancer may  walk with long slow lunges, yet  his/her
sholders, head and hips may work on other beats.

All this is manifest at the start of  “Nearly Ninety (2)” as partners enter two by
two in different areas of the stage space, displaying  varied shapes, designs,
rhythms and balance. The composite design is delightful especially since it is
followed by a section of changing partners, wherein solo dancers replace those who
started and new designs are formed. New balances, off balances, curves, tilts and
stretched shapes give architectual wonders.

Stillness has always been part of the Cunnigham vocabulary as silence was part of
Cage’s sound scores. In this work, several dances run and sometimes leap on stage,
and then sit, still, observing the activity around them. A series of short solos by
Rashaun Mitchell, Danel Madoff, Silas Riener, Andrea Weber, Jennifer Groggans or
Julie Cunningham provides diversion. Groggans even watches perched on Brandon
Collwes shoulders. These episodes offer a dramatic sense though no narrative is
intended.

The work though seems to fall into three sections, manifest by changes of costume (
by Anna Finke) and lighting (by Christine Shallenberg). The first part is dark and
low to the ground; next a middle section seems to move across space freely. The last
part is arial and swift although brought back to earth by Julie Cunningham’s long
adagio solo upstage. For this viewer, the piece as a whole is a little evolution of
the dancer’s journey. Perhaps Merce was reviewing and previewing his world, past,
present and future.

Besides those mentioned above, the company includes Dylan Crossman, Emma
Desjardins, John Hinrichs, Marcie Munnrlyn, Krista Nelson, Jamie Scott and Melissa
Toogood. The ever intelligent Robert Swinston is now the director of choreography,
responsible for the over 100 works that will be shown in the two year legacy tour to
follow.  The MCDC rturns to Zellerbach Hall on a farwell engagement March 3-5, 2011.
On the program will be the early, outrageous “Antic Meet” (1958) with costumes by
Robert

Cunningham’s work is a gift to contemporary world which should be prized, honored
and enjoyed.