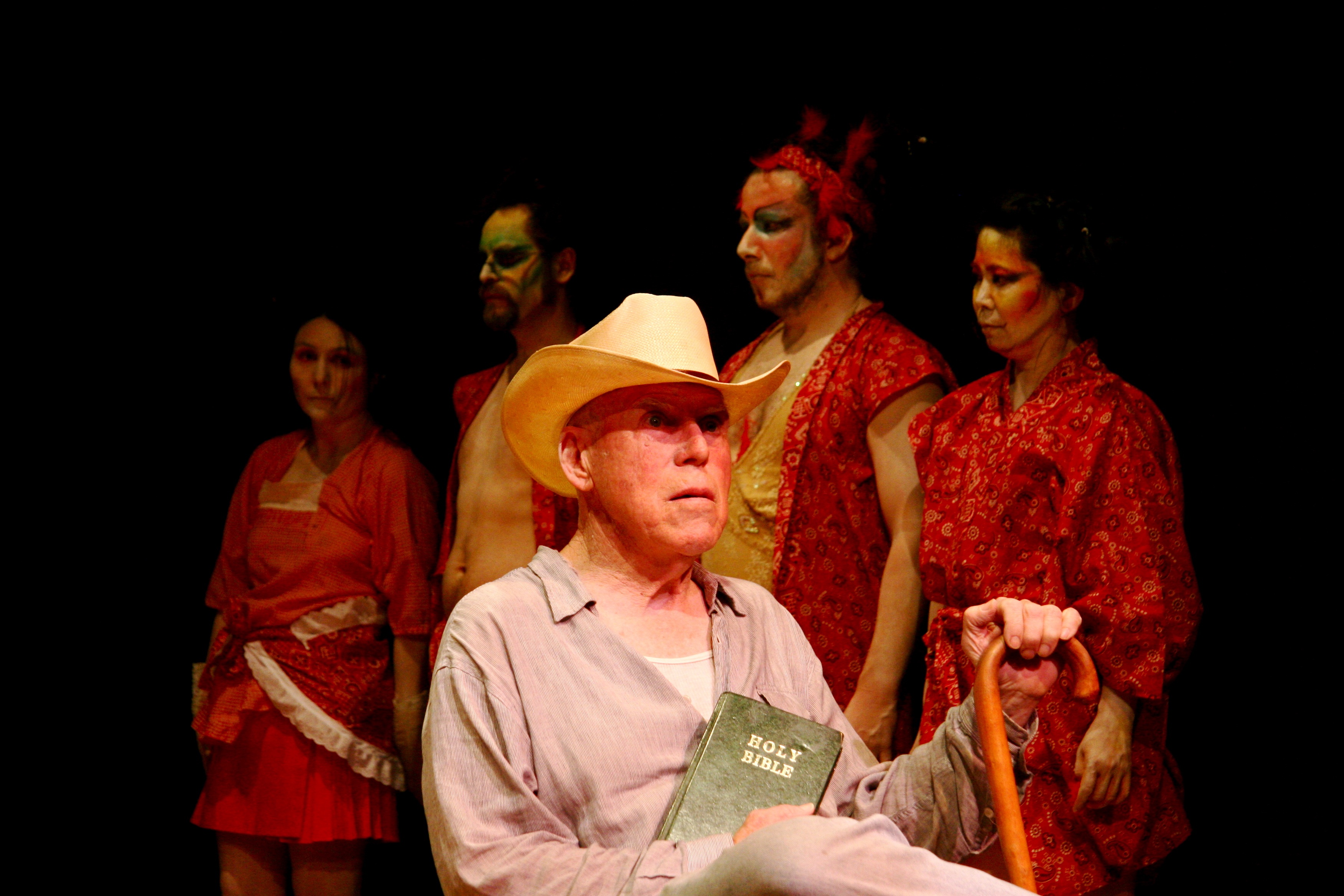 MUTT is characterized in the program as “a dance-play where new music,
piercing physically and dreamlike story-telling collide in this surreal
afterlife of a young girl.” As produced, it is a Fellini-like series of
episodes exploring a honky-tonk world wherein Miyomi, a mixed-race girl
from an Arkansas internment camp, encounters her past and future.
Dandelion Dancetheater prepares us for Halloween by introducing some of
the most bizarre characters seen on an SF stage.

The piece is choregraphed by Kimiko Guthrie and Eric Kupers, long time
directors of Dandelion, which is “situated at the crossroads of dance,
theater, community activism, healing and new performance forms.” MUTT
therefore manifests all of these dimensions: the dancers sing and
speak, as do the musicians. Children ride bikes; there is a performer
on a wheelchair. The cast includes performers who are elderly and very
young. It is a costume party, a masked ball, a grotesque revelry and a
weird study of the line between life and death. MUTT is a collaborative
celebration of performance.

There are wonderful moments. Dancer Anne-lise Reusswig, who portrays
the wife of the Texas watch guard who  fathered Miyomi, does a duet
with a cello. The band, named, Flo, Mo, Joe and Koko, (Kupers,
MischaPlonsey, David Ryther and Mickey Kay), besiege Miyo soon after
her zoom into afterlife with a weird chanting riff. At one time, the
entire ensemble moves in unison down stage with menacing gait, a
warning to us all, as audience, that what was has to be faced and
what’s to is inevitable.

Well deserved kudos belong to Julie Brown, as Miyo, who sustains a very
long series of difficult task, while speaking, singing and dancing, and
to Iu-Hui Chua who portrays her mother. Eric Andler, as Miyo’s red-neck
grandfather is a good, albeit, long-winded, storyteller and Keith
Penney, is a great comic in  his role as Frankie,Jr. The text is
sometimes weak and unclear. Too much hapens too quickly for the
physical and verbal gags to read. The piece goes on too long. Film and
TV today manifest all the weird underworld characters of the
imagination: MUTT is a good trip there.

Credits include music composed by the band, lighting by Eric Andler,
costumes by Yukako Shirahama, and makeup by Mantra Plonsey. The cast
has a goodtime with all the shenanigans. The audience needs help and
more concentrated events within the show to  be included in the fun…and
the pathos which is there, but gets lost in the acts.