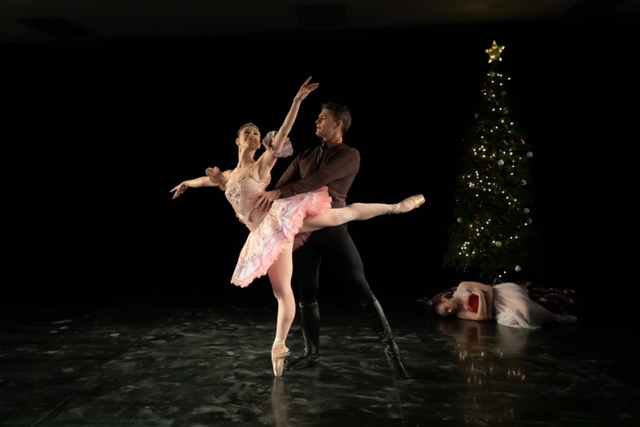 Diablo Ballet Artistic Director Lauren Jonas commissioned Julia Adam to locate her “Nutcracker Suite” in a hotel suite—San Francisco’s Hotel Fairmont, to be exact. The company then tied the whole production up in an anti-viral cordon sanitaire. The result is one of the more ingenious boutique holiday ballets in memory, where the homonym “sweet” twins fittingly with “suite.”

A backstage cinema verité tour, created by Jordan Tilton, including declarations by Diablo dancers, captures the most intimate of reactions to a COVID shutdown that has eclipsed two contiguous performance seasons. In a pre-curtain introduction, Jonas explains the measures Diablo Ballet followed scrupulously, drawing on community health practitioners, to enable producing a mask-free performance. Like Adam’s Fairmont tale, it recounts a holiday story like no other, in part because it issues from a new era in the virtual presentation of staged works.

Adam flips the switch on traditional Nutcracker themes. Her radical reconstruction weaves an instrumental version of an Elvis tune by the Jackie Gleason Orchestra into the beloved, if dog-eared Tchaikovsky score.  Costumers (Renee Rothman and Rebecca Berke) put Clara in a poodle skirt; her male lead is not a prince but a bellhop (Roberto Vega-Ortiz) whom Adam christens Bell Nut. After the abbreviated party scene, with the briefest divertissements on record, Clara dreams of a rat fighting Bell Nut. The Bellhop, exhausted, falls to the floor, has a dream of his own, and, at Drosselmeyer’s urging, is awakened by Clara’s kiss.

It is forgivable that the libretto is shamelessly derivative of so many ballets because that’s the whole point. It’s where the joy comes calling, with bits based on works Diablo has done in the past, as well as time-tested classics. The inside jokes tickle the balletic funny bone, while tipping sacred cows in the ballet pastorale. Adam’s Clara (Olivia Powell) is less the alternately confused, bemused waifish object of the Concierge (Michael Wells) Drosselmeyer’s prestidigitation, and more a teenage self-starter with a walloping charisma all her own.

The choreography is simple, yet stately, sparkling, and inventive, but not too big for its britches—or your wide-screen format. The spare yet lavish set, fifties period costumes interspersed with silky swirly Mirliton sweets dresses, lift and warm production values into a mulled brew of seasonal charm.

Perhaps the most outstanding feature is the brilliant use of the film medium (Walter Yamazaki and Luke H. Sauer.) From the tight shot on a chambermaid’s upturned whisk broom that marks an early music cue, to another that freezes the mischievous look on Fritz’s (Felipe Leon) face as he snags a rat through a kid’s lair of wooden chair legs, we are in it! We become the surprised visitors to that wonderworld where children make their fun using serendipitous objects that appear out of nowhere.

Much of the footage is shot sidelong, on a diagonal across the proscenium from the wings, instead of from front/center. That angle lengthens the stage and adds runway glamour to the luxury hotel set. Against a long swathe of  darkness, anything that’s lit (Jack Carpenter) promises a brightened adventure.  Some traditional elements, such as snow and an actual nutcracker, go missing, yet are not missed. More eye-pleasing, intriguing, and dynamic talismans that the camera loves, stand in for them. Instead of a horse and carriage, Clara is carried away on a brass-framed luggage cart.  Here’s the permission you’ve waited a lifetime for to ride one of those contraptions!

Amanda Farris steals our hearts in her Snow Queen Grand Pas; Jackie McConnell is a tantalizing Sugar Plum; Vega-Ortiz tenders spit-and-polish as the Bellhop/Bell Nut with beguiling wacky charm; and Powell is an adolescent Eloise, transplanted from the Plaza to the Fairmont, who has benefitted from firebrand ballet training.

What a perfect post-Thanksgiving repast treat! See it, Zoom it with friends and family afar, but mostly treasure it to look back upon as the sugar plum Diablo Ballet pulled out of the Corona mire, so that it couldn’t turn “the most wonderful time of the year” into the saddest. It may be one of the few standouts in 2020 to be very thankful for.

(17683)
$6.99 (as of January 21, 2021 - More infoProduct prices and availability are accurate as of the date/time indicated and are subject to change. Any price and availability information displayed on [relevant Amazon Site(s), as applicable] at the time of purchase will apply to the purchase of this product.)

(21580)
$17.39 (as of January 21, 2021 - More infoProduct prices and availability are accurate as of the date/time indicated and are subject to change. Any price and availability information displayed on [relevant Amazon Site(s), as applicable] at the time of purchase will apply to the purchase of this product.)