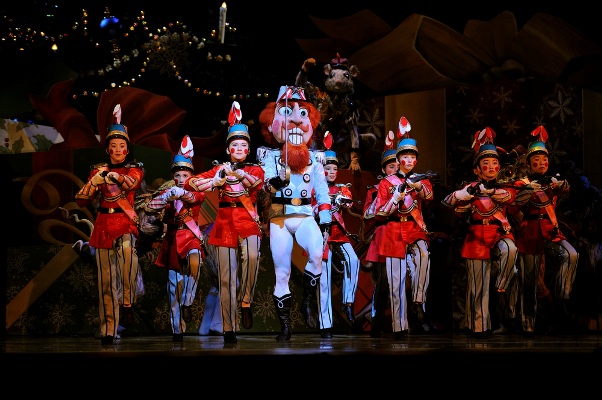 It’s December so this must be “Nutcracker.” The holiday staple, a cash cow for dance troupes big and small, is cropping up all over the Bay Area (and the country) this month, but possibly nowhere as lavishly as the War Memorial Opera House, where San Francisco Ballet holds forth until the end of the month.

Maybe because I haven’t seen it in a while or maybe because I had the great pleasure of the company of granddaughter Zoe, a four-year-old budding ballerina attending her first-ever “grown-up show,” but instead of the old chestnut I had expected, Artistic Director Helgi Tomasson’s version looked fresh and engaging and, by and large, was beautifully performed.

Instead of the usual maids-cleaning-up-before-the-party scene at the beginning, Tomasson’s re-imagined version takes place in a very specific San Francisco circa 1915, with a street scene on a block of Victorian houses that incorporates a cop, a nanny, a flower-seller and a couple of nuns among others. But even before that, we see the kindly uncle/magician Drosselmeyer (the indispensable Val Caniparoli) polishing up a nutcracker in his clock and mechanical toy shop for presentation to his favorite niece.

The party scene was kind of “same-old, same-old” with the presentation of gifts, the grandparents’ dance, the kids’ dance (cute kids) and the grownups’ quadrille. Drosselmeyer trots out some of his life-sized toys, including a floppy Jack-in-the-box and a “mechanical” ballerina. A bratty little brother breaks the toy nutcracker’s arm and Uncle D. fixes it with his handkerchief as a sling and then everybody goes home.

“When is Clara going to have her dream?” whispered Zoe, who had been clued in on the broad outlines of the tale beforehand. When indeed, as this is the heart of the ballet? Sure enough, the house darkens and the little girl creeps downstairs to check on her wounded nutcracker. And then, designer Michael Yeargen’s set takes on a life of its own, the Christmas tree growing to beyond the top of the stage and the walls closing in to give a geometric giant-sized aspect to the room. Enter the mice; intent on stealing the presents from under the tree and the toy soldiers, led by the Nutcracker, now life-sized himself, who are equally intent on preventing the theft. There is a really neat battle, but by this time Zoe’s head was firmly buried in my lap (far better than the little girl in front of us who burst out crying and had to be removed).

Not to worry, the good guys won, as always, and Clara and her Nutcracker, now transformed into a handsome prince, are whisked away by the magical uncle in a sparkling sleigh to the Kingdom of Snow. Finally, some real dancing and what dancing it was. Vanessa Zahorian literally sparkled in every sense of the word as the Snow Queen with Taras Domitro as her cavalier. The corps of snow flakes, combined with stage snow falling from above, created a magical picture and the music for this segment, for my money, is the loveliest Tchaikovsky ever wrote.

Following intermission — long lines to the restrooms and an obligatory stop at a candy stand — Clara, the Nutcracker Prince and the rest of us are in the Land of Sweets. The usual divertissements seemed unusually charming this time around: the Chinese dragon dancers funny, the Three Ivans jumping out of Fabergé Easter eggs to kick up their heels and a sinuous Arabian dancer emerging from a steaming pot of tea (“How come she didn’t get burned?” queried my companion, who by now was having trouble separating the real from the make-believe).

But the best was saved for the last, and the pas de deux of the grown-up Clara and Nutcracker Prince, elegantly performed by Sofiane Sylve of the unbelievable extensions and a high-jumping Tiit Helimets, brought down the house, and deservedly so. And then it was all over — for another year.