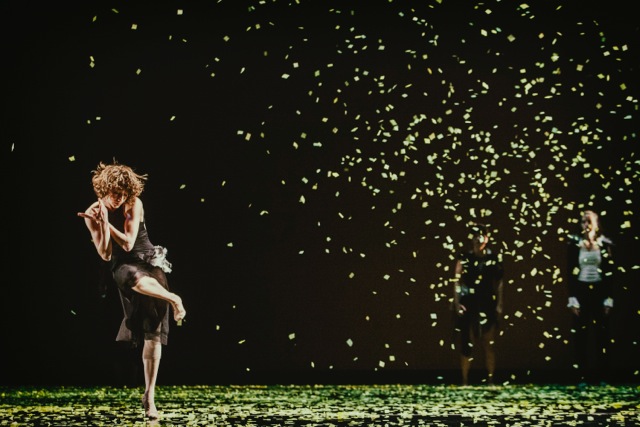 There are certain creative jobs that always sound like a hoot to have, like the person who gets to name paint chip colors…or in the case of “Dead Reckoning,” the person who gets to develop the “snow concept.” That is the title given to company dancer Yayoi Kambara who came up with how to have a constant rain of ticker tape sprinkling or down pouring throughout the entire dance, which in essence creates the set and the feeling that the dance is taking place in nature. At first that “snow” is hand thrown from a basket on top a high platform of five steps, like a flower girl at a wedding, but as this dynamic piece evolves it cascades like a mist twirls like a dust storm, and at times piles high like stacks of raked leaves. The effect is mesmerizing and ethereal and, beautifully juxtaposes the black stage and Liz Brent’s gender bending, “Burning Man”- inspired black and grey costume design, with some women in men’s suits and many of the shirtless men in skirts or dance shorts.

Within this deluge of atmosphere the ODC troupe explodes like a force of nature to Joan Jeanrenaud’s commissioned cello composition and percussive cello playing. They are precise, dynamic, brilliantly fast and on the mark as each one gets to shine in their unique talent–thanks to KT Nelson’s vision given shape by her sabbatical in Death Valley. The male portion of the company, which in the past has received criticism about not being up to speed with the talented corps of women, has handsomely matured and smartly complements one another. Jeremy Smith’s introverted sensuality adds dimension to Dennis Adams’ spark and precision, and rounds out Justin Andrew’s studly lyricism. Corey Brady’s powerful solo appears to happen within a flurry of butterflies, while managing to cover the moment when he actually broke his foot… missing the second act and curtain call.

Matthew Anataky’s lighting provides additional drama the way the rainclouds darken parts of a terrain while the sun pokes through to highlight other fields, as the choreography’s architectural use of space and dimension remains consistent throughout. To this vibrant encounter with an ever-changing landscape, and metaphor on climate change and the drastic changes in nature, the sound of trees crashing to a parched earth thunder bring “Dead Reckoning,” to its dramatic close.

“The Invention of Wings” is also image and statement driven, but in a more heavy-handed fashion, taking on censorship and freedom of expression as its issues. Originally presented at the opening for a site-specific installation by Chinese political artist Ai Weiwei on Alcatraz Island, this is the first time it is being presented on stage. “Wings’” elaborate imagery begins even before the performance officially starts with a roll of paper being written on, then torn up and placed inside a birdcage. During the performance three male dancers posing like clay figurines are pulled across the stage on a small wagon, their torsos naked, as a female dancer paints numbers across their backs and then later big red X’s. Overhead, on a rectangular screen, hangs an image of a naked woman reclining with her back to the audience as Chinese calligraphy slowly is overlaid on her body until it covers her completely. These images of nudity and semi-nudity bring to mind Ai Weiwei being accused by the Chinese government of making pornography for his taking photographs of naked models, and his subsequent response to the government when he took more pictures of naked people with an image of his face glued to their private parts.

To these impacting images by Ian Winters and RJ Muna is a sound score by Olafur Arnalds, Ben Frost, and Ben Juodvalkis that includes the oppressive sound of a hospital respirator metaphorically keeping someone or some idea alive. The rectangular paper screen of the naked woman is eventually torn in half, streamers unroll from above with more calligraphy written on them, until two large blobs of paper slowly wobble onto stage before dancers appear from underneath them. The slow walking blobs are unintentionally a comic relief to the dead seriousness of the dance, which attempts to glue these provocative images together into one cohesive voice. However, the choreography is disjointed, suppressed by the ambition of subject with only fleeting moments where the choreography stands solidly on its own. Perhaps this dance between art and statement appeared more cohesive in the prison environment that it was designed for, which one can only speculate. Ultimately it is more accomplished as an art project than dance piece.