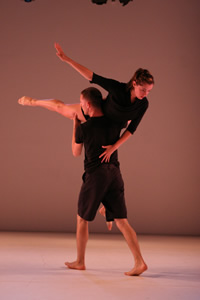 Pam Tanowitz has been steadily turning into one of the smartest young choreographers in New York. Her recent show at the Joyce Soho, Forevermore, united in an evening-length work elements that she has included in recent years, but with a bold confidence.

Tanowitz has always displayed a knack for making interesting movement that resists being revolutionary. Her modern style is deploys some of the structures of ballet blended with the insouciance of Cunningham. Her collaborations with visual artists in the past, such as Cecily Brown, seemed to showcase the art more than the dance. Here, Philip Trevino’s set design featured simple but striking elements that played with the quixotic black box set-up of the theater space – a fabric fence demarcating the apron that the dancers had to step over, and later lie upon; upstage corner portals where dancers stood, lit like statues by Julie Ana Dobo, accentuated rather than underplayed the transition between on- and offstage.

While all aspects of the theater provide a kind a laboratory for Tanowitz, the movement remained integral and continuously fascinating to watch. Posy Knight began with repeating variants on the fouette, a movement somehow both difficult and prosaic done in a workman-like mode. The dancers – Anne Lentz, Daniel Madoff, Melissa Toogood, Uta Takemura, Natlie Bostick, and Delphina Parenti – worked in pairs and small groups, lunging, dipping into grand plies, leaning on one another. As a dancer entered for a solo, another followed her with a handheld spotlight whose cord was suspended from a guy line. The other dancers walked next to the walls, gingerly stepping over the ground-mounted light fixtures.

This manner of winking at the stage’s conventions while shedding light on normally overlooked aspects brought to mind another New York innovator—Sarah Michelson, whose Dogs completely transformed BAM’s Harvey Theater last year. She and Tanowitz also share an eye for detail and a baseline reverence for classicism. It will be interesting to see what Tanowitz does if and when her company performs in a larger house. When that happens, go.