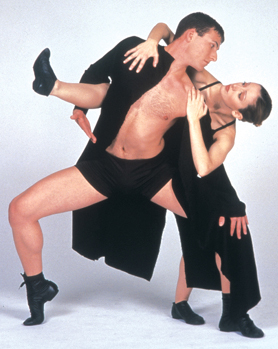 How many years does a choreographer have to be on the scene before reviewers stop talking about his influences? When does he become, simply, himself? In the case of Pascal Rioult, the influence includes Martha Graham, so it&#146;s probably going to be a few more years. Rioult has been on the touring roster with his own small modern company for ten years now, but the fact that he and his wife, company co-founder Joyce Herring, were both Graham principal dancers, is hard to overlook–maybe because nobody does Graham-based technique much anymore.

What separates the Graham idiom, and what makes Rioult&#146;s work look distinctive,are a couple of basic facts. One is that Graham was never afraid of looking ugly; the other is that she was never particularly interested in moving through space. Graham&#146;s pelvic-centered, earth-hugging movements were all about deepness, of feeling and of movement initiation. Rioult&#146;s take on dance may be influenced by Balanchine&#146;s choice of music and updated by everything from Paul Taylor-style Americana to Michael Jackson and hiphop, but if you have ever seen, or better yet, danced Martha Graham technique, you know. There is no escape.

And it&#146;s a good thing. The opening piece on Rioult’s current program, Veneziana, part of a Stravinsky-based program, needed Martha. Rioult&#146;s balletic, lyrical movement looked as bland as a loaf of Wonderbread. References to commedia dell&#146;arte via Stravinsky&#146;s Pulcinella seemed perfunctory. It was all about the music, which wasthe neo-classical Stravinsky,non-edgy, composed after his wild, &#147;Russian&#148; years. The eight dancers were split into solo couple (with love interest) and chorus of six. Sections of the dance were reflections of the musical design, without any real choreographic point of view. It could have been Paul Taylor, or Mark Morris on a really bad day.

Rioult&#146;s Firebird, on the other hand, was as ugly and tortured as any of the mythic Graham works. In this case, the chorus was a band of hell-dwellers. They danced like Michael Jackson: little chugs and jerks and contorted postures. The dancers had a great attack and conviction in this weird world; they looked just right in the gnarly moments, much more convincing than they looked at ease. The Firebird herself was all sweetness and light, a little girl, Hannah Burnette, who could have been one of Isadora Duncan&#146;s flock,barelegged in a white shift, holding two green peacock feathers.Rioult deftly kept the movements for her simple and childlike, little skips and wavings of the feathers, but Burnette knew exactly what she was doing, and looked out at the audience with the calmness of a veteran.

Thematically, her arrival was supposed to represent the power to release man from evil and be reborn, and the chorus surely shifted intoopen-hips, leg extensions,partnering and contractions of gratitude. But there was the matter of the music. Rioult&#146;s idea was presented in the first five minutes, but there was a whole lot of music left to cover after that point,and the choreographer ended-up padding, retreading, having his purgatorians fall back off the salvation wagon and on again. Finally, when Burnette turned,let the feathers sway behind her like wings and walked off, the moment felt complete, the piece emotionally closed. But the music wasn&#146;t finished, and Rioult&#146;s flock-of-seagull ending leftthe dancers looking hopelessly silly. There were only eight dancers plus Burnette, but with the charcoal-gray mountain flats and the Blakean sky backdrop taking up much of the stage, there was nowhere for them to fly, or even run, for that matter.

The matter of space seemed solved once and for all in Black Diamond, a duet for Lorena Egan and Penelope Gonzalez, which Rioult choreographed to Stravinsky&#146;s Duo Concertante. Here, the women appeared on raised platforms on stage right and left. The lighting, by David Finley. was dark and dramatic, and the hip thrusts, back falls, held leg extensions and arm reaches of the women, working in unison and apart, created power and emotion.

The eponymous Duo Concertante by George Ballanchine was another affair altogether, a male/female duet, all partnering and love.Here the influence of Graham succeeds especially because the concept is woman. These weren&#146;t ballerinas, this was not lyricism. Lorena Egan even offered Rubensque proportions on top of unmovable balances and an amazing ability to writhe and fall and show how strong sensuality can be on the right body. Penelope Gonzales was lighter and quick, sharp as an arrow in her leg attacks and rolls to the floor. No one but Graham-trained dancers knows how to treat the floor as a friend. Here, and elsewhere in the evening, the Rioult dancers made floorwork as exciting as the most weightless grand jete.After moving together in a duet of contrasting shapes, Gonzales and Egan were back on their platforms, whereshafts of light suddenly shot up like fire from below, straight from the earth and right through them.

Bolero, a crowd-pleaser, completed the program. Here, Rioult used the repetitive nature of the famous Ravel score to create machine-like patterns for the chorus, from which, in ones and twos, solos would break away,offering a different story. The growing tension of the music, building and building, was well-matched by the ever-more complicated patterns of the group. When dancers managed to break away, for a moment there would be a glimpse of rhythm-defying slowness, some reach and roundness out of all the arm-snapping, relentlessness of the others, like a vision ofhope in a fever-pitched world ofwork-obsessed robots, who are all of us.

Once Rioult works himself through all these cliche-laden, already-choreographed-to greatest hitsof dance music it will be interesting to see where he ends up. Will he realize the value of holding onto Martha? At present,he’s a talented choreographer searching for a voice. There are victories and losses along the way, but the &#147;old-fashioned&#148; miracle of Graham&#146;s ideas about dance and the body are due for a comeback.