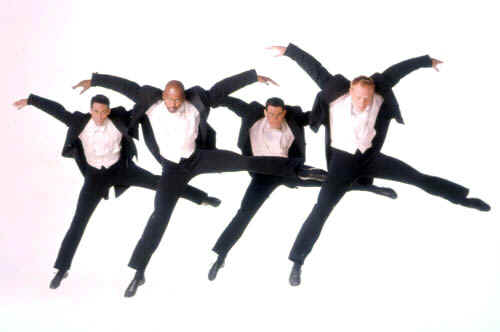 They don&#146;t make modern dance companies like they used to. Paul Taylor&#146;s has been around for fifty years now, in which time the choreographer has secured himself a home in the annals of dance history, not just for survival, but for creative output.

Taylor choreographs two new dances a year, and although his movement repertory inevitably begins to look repetitious after so many decades, his brain is such a complexity that the themes and ideas he keeps coming up with hold interest. The "technique" features certain Graham-influenced big moves, and patented ways of using the arms that look good on specifically the kinds of dancers he always casts–hunky all-American "boys" who look good with their shirts off, and cute, perky, best-friend-type "girls."

Taylor&#146;s choreographic themes are all-over-the-board, but he is inclined to choose classical music as a building block (over silence, or some jarring, Cunningham-style electronica). Those around him in history, the individual voices who built mini-empires with dance companies named after themselves, look a lot more "modern" than Taylor&#146;s work does, for some reason. Of all the 20th century greats, Taylor has almost vanilla taste; his "brand" features attractive dancers, crowd-pleasing, easy-to-watch choreography and then some kind of a twist.

In the twists resides Taylor&#146;s genius. His ideas are intriguing, even bleak, but his presentation of them is, for the most part, lyrical. What else could an audience-member ask for? Advertised as "The master of light and dark," as well as "the best choreographer in the world," the array of dances Taylor opened with on tour in San Francisco included famous works spanning three decades. Each piece ventured into different themes, but shared a sharp sense of humor and an open-eyed, unglamorized look at human nature.

Cloven Kingdom, the earliest piece, was first performed in 1976. Here, men in tuxes and women in pastel gowns strain to maintain decorum in a world where baser instincts are always pushing to emerge. The musical score starts serenely, with stately melodies of Corelli and Henry Cowell, but a pulse of African drums enters softly, in the background, eventually growing to take over. Taylor&#146;s juxtaposition of movement styles, mild to wild, is done with a satiric touch. Nothing ever goes totally out-of-control here, and no one gets hurt. Still, it is clear from the famous rapid-fire men&#146;s quartet, that the darker, wilder side is more interesting to Taylor. He does a good job at "lovely," offering old-fashioned lyrical modern dance at its best, but his true artistic impulse is to subvert simple ideas and beauty. Here, circles of swaying pastel lead to anarchic jumping. Half-way through, women begin to emerge wearing mirrored headdresses, all the better for the audience to look at itself, literally.

Lost, Found and Lost is a 1982 piece that uses pedestrian phrases from a more experimental time at the very beginning of Taylor&#146;s choreographic career, (Events 1 from 1957). This time around, however, the choreographer sets all of it to the kind of singing strings music once heard in dentists’ offices and grocery stores. The effect is hilarious. Taylor once enraged the New York Times dance critic so much with his early non-dances that the writer wrote a non-review, leaving an entire column space blank. Thirty years later, Taylor was ready to make fun his own pretensions, and created a droll work that offers ten dancers an opportunity to show off their subtlest comedic talents. Lost, Found and Lost is under-the-top, rather than over, and much more effective because of it. Taylor is a masterful director, raising an eyebrow here and exaggerating a slumped hip or a hand placement there. A group of men come on and suddenly begin to do endless little first position jumps for no reason. When they lift a woman over their heads and begin to do it again, it&#146;s even funnier.

Company B the World War II Andrews Sisters dance, also performed locally this season and last by the San Francisco Ballet, is classic Taylor. It was interesting to see how the Taylor dancers inhabit their own material. Compared to their balletic brethren up at the Opera House, the Taylor people added grounding and American good looks to the piece but faltered a little on the spectacularity-quotient during solos. Michael Trusnovec shone in his nerd glasses in the song, "Oh Johnny, Oh Johnny, Oh!," jumping and turning with virtuosic aplomb and clear, extended legs. The other male solos looked more earthbound. These are male dancers with buff bodies and tight hamstrings, women who look better attacking movement rather than going ethereal. Still, Heather Berest, in "I Can Dream, Can&#146;t I" and throughout, had an elegance about her that stood out in contrast to the perky, athletic quality many of the other women possess.

Taylor may be a realist, even a cynic, but always a tender-hearted one. Lighting here and throughout, by Jennifer Tipton, painted Company B in a nostalgic glow, as if all the tragedy of that era, clearly alluded to by Taylor throughout the piece, can now be left behind.