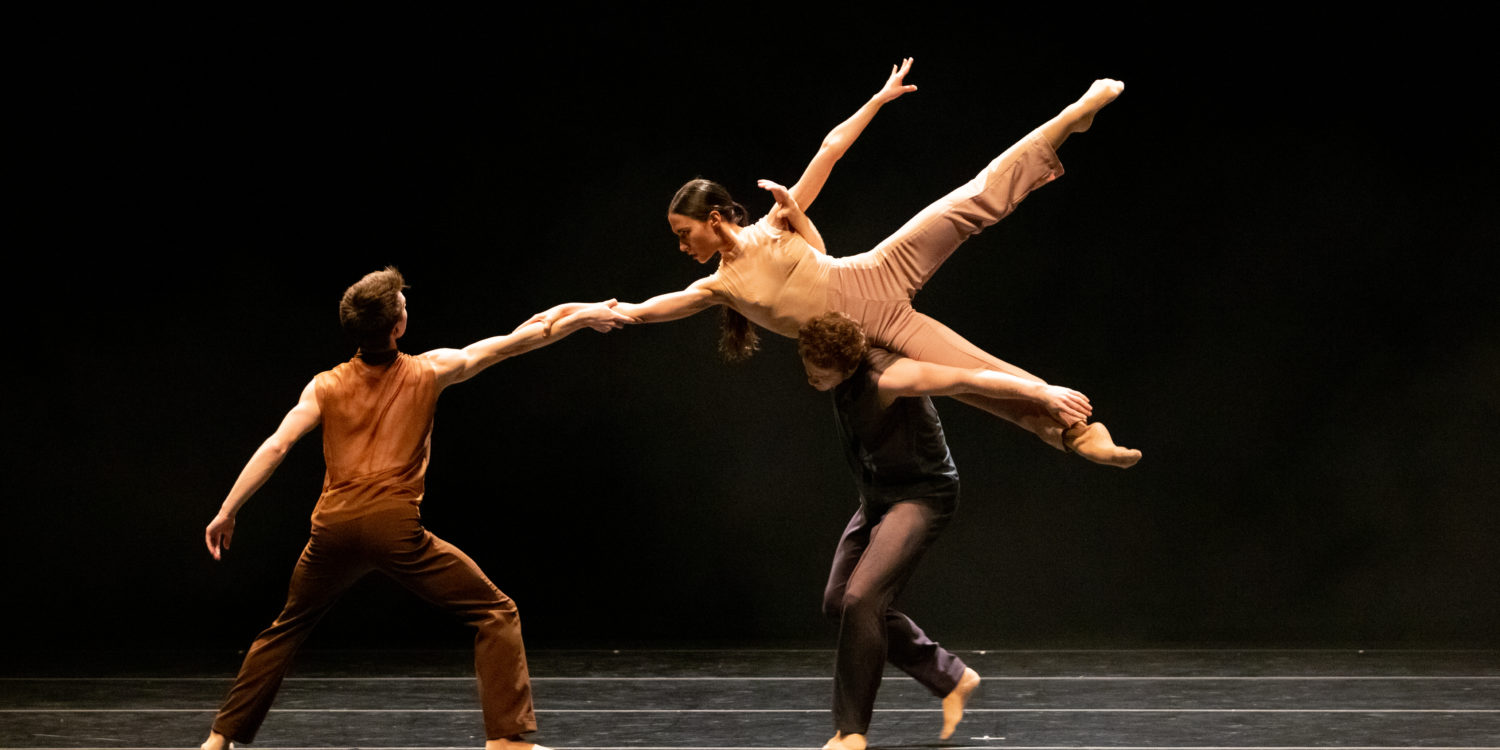 New Works for a New World

New Works for A New World

The Philadelphia Ballet’s ‘New Works for a New World’ program features newly commissioned premieres by choreographers Juliano Nunes, Alba Castillo and Andrew Winghart. The company is performing the for the first time in the Kimmel Center’s Perelman Theater instead of The Merriam Theater where they have staged their contemporary ballets.

During the almost two years of industry shutdown, PB’s Artistic Director Angel Corella continued to rebrand the company and exploring new directions artistically. Corella introduced the program for the first time performing in the more intimate Perelman Theater stage as he welcomed and audiences back to the company’s regular live performance season.

Just hours before the opening, it was announced that Juliano Nunes has been named Philadelphia Ballet’s newest resident choreographer. The Brazilian dancer-choreographer has created ballets for the Mariinsky Theatre, Ballet Jazz de Montreal, Acosta Danza, Zurich Opera House, among many other ballet international companies.

The curtain rose on Nunes’ ‘Alignment’ with 14 dancers all in costume designer Mikaela Kelly’s silver unitards. Scored to composer Luke Howard orchestral music- The Map is not the Territory, In Praise of Shadows & Hold Me Through- that underscores Nunes’ choreographic themes.
The ensemble executing angular, contrasting limb arm movements, as they move in formations around the stage, when one by one they randomly break away in solos as the choreography blooms with more lyricism. Solos and duets take center stage as the choreography becomes more liberated, shifting from abstract movement to more expressive narratives.

Among the outstanding soloists So Jung Shin’s lithe technical artistry. Arian Molina Soca executed a diamond hard turn sequence. But there was plenty of virtuosic moments for other dancers in Nunes ‘cathartic movement mosaic, with a finale that ends in an ensemble sculptural frieze stretched over the stage.

Spanish choreographer Alba Castillo’s The Persistence of Memory starts with the sound of a metronome which ticking away. Principal dancer Oksana Maslova hypnotizes as the central figure in Castillo’s meditation on time and how humans reconcile its relentlessness. Castillo was inspired by the surrealist art of Salvador Dali, and she sets it to the ticking of the metronome along with music by Nils Frahm, Olafur Arnalds, E. Errante, C. Bissonnette, Lambert.

The blowout closer was Prima Materia, by Andrew Winghart, scored to his own compositions for 24 dancers, had the audience on their feet with lusty applause by the end.

Winghart has choreographed for highly commercial artists including Justin Timberlake and Cirque du Soleil and this piece has some of those commercial elements built into the front half of this piece. with some of Winghart’s style of sinuous, waves of group movement, crowd-pleasing, but not much of a challenge for contemporary ballet dancers.

Then the men then enter, bare-chested now in muslin sarongs, in a scenario that has both a retro and futuristic aura featuring a pugilistic flashdance between Principal Sterling Baca/and soloist Ashton Roxander.

Next month Corella will showcase their traditional ballet range on a new generation of dancers in the company with his adaptation of Swan Lake followed by a program of works by George Balanchine, who established Pennsylvania Ballet as one of the first regional neoclassic ballet companies in the US, with his ballet techniques and works as their core aesthetic.
.